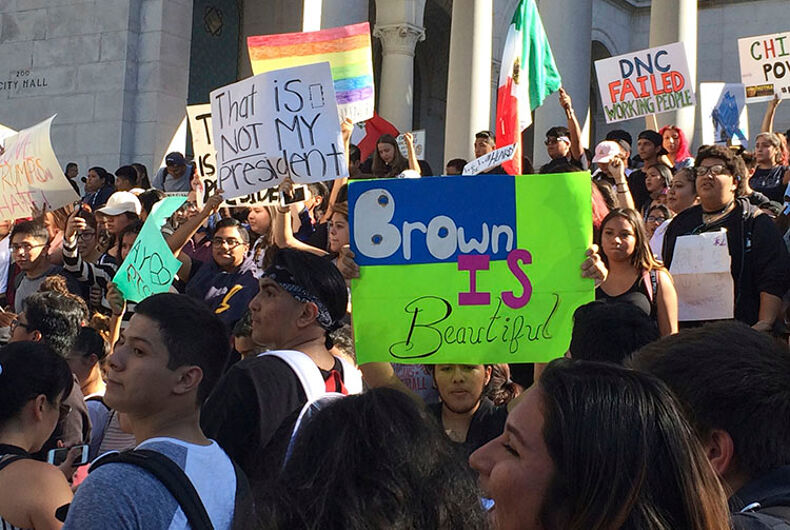 Students left high school classrooms by the thousands, carrying their signs and their chanting voices into the streets of several U.S. cities nearly a week after Donald Trump’s election.

They walked out Monday in California, Colorado, Maryland, Washington and other states, many declaring concerns over the president-elect’s comments about minorities and the effect he will have on their communities.

Some of Trump’s supporters have called for the demonstrations to stop, including former New York City Mayor Rudy Giuliani, who dismissed the protesters as “spoiled crybabies.”

Trump has accused some of being “professional protesters,” although he said in a “60 Minutes” interview broadcast Sunday that he also believes some are afraid for the country’s future “because they don’t know me.”

Here’s a look at some of Monday’s protests:

More than a thousand students from several schools on Los Angeles’ heavily Hispanic east side marched out of classes.

Students with signs and slogans headed to nearby Mariachi Plaza. They were joined by hundreds of students from several schools, many shouting, “Say it loud. Say it clear. Immigration, welcome here.”

Some carried signs that read “Deport Trump,” while others waved the U.S., Mexican and gay pride flags. Many said they have relatives and friends in the country illegally who they fear will be deported.

Brian Rodriguez, 16, was born in the U.S. to parents from Mexico and Guatemala. He said he was offended by Trump’s criticism of Latinos.

“It hurt me inside knowing somebody from outside our race is talking bad about us,” said Rodriguez, carrying a sign reading, “Brown and Proud.”

Rodriguez said his school’s principal opened the gates and told students they could participate.

Nancy Meza, a community organizer who announced the walkout, said she helped students organize after they reached out to her.

“It was really out of frustration of students wanting to voice their opinions,” Meza said. “And wanting to feel protected.”

Hundreds of students from a dozen high schools in Oakland skipped classes to demonstrate.

They called on California cities to remain sanctuaries for people in the country illegally, the San Francisco Chronicle reported. San Francisco Mayor Ed Lee vowed Monday to maintain that status.

Administrators had hoped students would return to class quickly, but they did not ask them to stop protesting, Oakland Unified School District spokesman John Sasaki said. “We support our students’ First Amendment rights,” he said.

About 200 middle- and high-school students left two Denver charter schools to march to the state Capitol, where they chanted and held up signs saying, “Millennial voice matters” and “Make peace not war.”

Police and school officials escorted the students along city streets to ensure their safety.

The protesters called out “Si, se puede” — Spanish for “Yes, we can” — and “The people united will never be divided.”

Noelie Quintero, 17, said they represented Latinos, Muslims, women and others marginalized by Trump.

“We’re not going anywhere — we’re going to continue to stand strong,” she said. “Even though we’re only 16- and 17-year-olds and we can’t vote, our voice matters. What we believe matters, and we’re not going to stop.”

In a city that has seen large and destructive protests, a few hundred students from several schools walked out of class to gather in the rain near City Hall.

The group held signs saying “Students for change” and “Love trumps hate.” They marched across a bridge, some of them climbing up it, while officers stopped traffic.

It was peaceful, following smashed windows and other vandalism at recent rallies. Daily demonstrations have led to $1 million in damage and more than 100 arrests.

A protest organizer says activists were contacting counterparts in New York, Boston, Washington, D.C., and other cities in an effort to stop Trump from prevailing on his issues.

“Trump is going to be president, so we need to prepare for that,” said Greg McKelvey of the group Portland’s Resistance.

Thousands of students across Seattle chanted as they marched in the streets and waved “Not My President” or “Love Wins” signs.

Some said they oppose Trump’s divisive rhetoric and wanted to show support for those he targeted, such as Muslims or immigrants. Others say they came to support their friends or simply to observe.

High school senior Rose Taylor, who is bisexual, says she worries about what Trump’s election will mean for the LGBT community and others.

Police say two men, who were not students, were arrested in connection with the protest.

Hundreds of high school students left campus and took to the streets to declare their opposition to Trump, while hundreds more gathered for a rally at a school football stadium.

The ones who left joined students from nearby Northwood High School, making up a gathering that Onijala estimated at 200 to 300, some of them chanting, “Not my president.”

Police Capt. Paul Starks says the protesters were peaceful except for one bottle-throwing incident. No one was hurt.