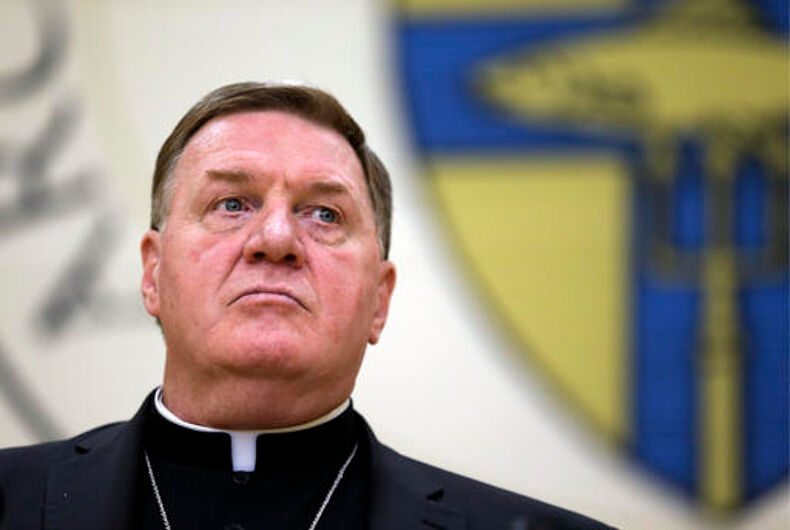 FILE - A Monday, Oct. 10, 2016 file photo of Indianapolis Archbishop Joseph Tobin discussing his elevation to cardinal by Pope Francis during a news conference in Indianapolis. Pressing his campaign to remake the U.S. Catholic church, Pope Francis on Monday Nov. 7, 2016 tapped one of his new cardinals, Joseph Tobin, to replace the Newark archbishop who has been criticized for allegedly mishandling sex-abuse cases and spending lavishly on his retirement home.Photo: (AP Photo/Michael Conroy, File)

VATICAN CITY (AP) — Pressing his campaign to remake the U.S. Catholic church, Pope Francis on Monday tapped one of his new cardinals, Joseph Tobin, to replace the Newark archbishop who has been criticized for allegedly mishandling sex-abuse cases and spending lavishly on his retirement home.

The Vatican announced that Tobin would succeed Archbishop John Myers, who reached the mandatory retirement age of 75 in July. Tobin, currently the archbishop of Indianapolis, is one of three American prelates whom Francis will formally elevate as cardinals on Nov. 19 at the Vatican.

Tobin’s new assignment marks a transition away from an archbishop who was focused on drawing hard lines about Catholic orthodoxy and provides a fresh start for an archdiocese that has been battered by controversies over Myers’ leadership.

Three years ago, Myers faced allegations that he failed to stop an abusive priest from attending youth retreats, despite the priest’s agreement with prosecutors that he would stay away from children. The priest was later defrocked.

Myers also came under fire when The Star-Ledger newspaper reported the archdiocese was spending about $500,000 to build a more than 3,000-square-foot (280-square-meter) addition to his New Jersey retirement home. The extension included a fifth bedroom, three fireplaces and an indoor exercise pool. Myers defended the expense by saying he needed an office and wanted more privacy for visiting bishops.

Last year, Myers fired a gay priest as chaplain at Seton Hall University because the priest expressed support on social media for an anti-bullying campaign that aimed to protect gays and lesbians. In August, Myers barred the priest completely from public ministry over his support for both LGBT rights groups and a female Catholic high school counselor fired for marrying a woman.

Francis hasn’t emphasized culture war issues as much as his predecessors and has reached out to gay Catholics, part of his focus on showing a more merciful, welcoming side of the Catholic Church. His U.S. appointments have followed that direction, with both Tobin and the Chicago archbishop, Blase Cupich, among the pastors getting red hats later this month.

Massimo Faggioli, professor of theology and religious studies at Villanova University, said Tobin’s nomination confirms a pattern Francis has set by moving bishops he knows well into important posts in the U.S. church, giving them a global platform. Geographically, the nomination is also significant since Tobin will be moving “right in the middle of two very important bishops who do not always see eye to eye with Pope Francis” — the conservatives Cardinal Timothy Dolan of New York City and Archbishop Charles Chaput of Philadelphia.

Francis had appointed a different successor to Myers three years ago amid allegations Myers failed to stop an abusive priest, Rev. Michael Fugee, from attending youth retreats. But in March, the pope moved the chosen successor to lead to the Archdiocese of St. Paul and Minneapolis, which was itself in turmoil over revelations of mishandled cases of clergy sexual misconduct and the resignation of Archbishop John Nienstedt.

Myers’ spokesman has defended the archbishop’s record on child protection, saying he had removed more than a dozen abusive clergy from ministry. But advocates for victims pointed to cases in Myers’ previous assignment, as bishop in Peoria, Illinois. When Myers left that post in 2001, his successor quickly removed several priests who had been accused of molesting children. Myers had said he didn’t know of the allegations against the clergymen, but Peoria church officials said the first allegations against one of the priests had been made in 1993, three years into Myers’ tenure.

Tobin made a name for himself in the Vatican as the former No. 2 at the Holy See’s office for religious orders, where he reached out to U.S. nuns who were the subject of two separate Vatican investigations. The investigations ended with the Vatican praising the sisters for their work with the poor and disenfranchised. More recently, Tobin openly opposed the position of the state’s governor, Mike Pence, now the Republican vice presidential candidate, who wanted to prevent Syrian refugees from settling in the state.

Francis’ concern for refugees has been one of the hallmarks of his papacy.

Pentagon to same-sex domestic partners: Get married by New Year’s Eve, or else