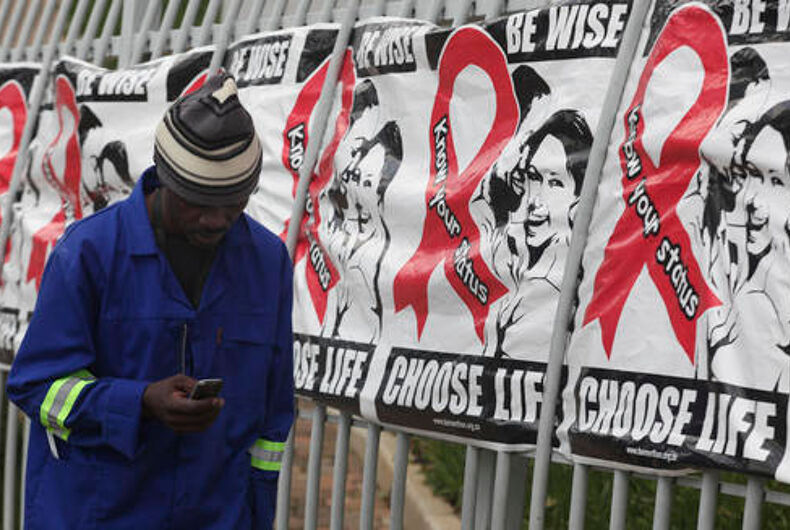 FILE -- In this Dec. 1, 2014 file photo a man makes a call on a mobile phone as he passes World AIDS Day banners on the perimeter of an office building in Sandton, Johannesburg, South Africa. A new vaccine against HIV, called HVTN 702, is to be tested in South Africa, it is announced Sunday Nov. 27, 2016, and scientists aims to enroll 5,400 sexually active men and women for the clinical trial. Photo: (AP Photo/Denis Farrell, File)

JOHANNESBURG (AP) — A new vaccine against HIV, to be tested in a trial to be launched in South Africa Wednesday, could be “the final nail in the coffin” for the disease if it is successful, scientists say.

It will be the largest and most advanced HIV vaccine clinical trial to take place in South Africa, where more than 1,000 people a day are infected with HIV.

“If deployed alongside our current armory of proven HIV prevention tools, a safe and effective vaccine could be the final nail in the coffin for HIV,” Anthony Fauci, director of the U.S. government’s National Institute of Allergy and Infectious Diseases (NIAID), said in a statement released ahead of the trial.

“Even a moderately effective vaccine would significantly decrease the burden of HIV disease over time in countries and populations with high rates of HIV infection, such as South Africa,” he said.

The vaccine being tested in HVTN 702 is based on a 2009 trial in Thailand, that was found to be 31.2 percent effective at preventing HIV infection over the 3.5 years of follow-up after the vaccination.

The new vaccine aims to provide greater and more sustained protection and has been adapted to the HIV subtype that predominates in southern Africa.

“HIV has taken a devastating toll in South Africa, but now we begin a scientific exploration that could hold great promise for our country,”said Glenda Gray, chief executive officer of the South African Medical Research Council.

“If an HIV vaccine were found to work in South Africa, it could dramatically alter the course of the pandemic.”

Volunteers for the study, funded by NIAID, are being randomly assigned to receive either the vaccine regimen or a placebo. All participants will receive five injections over a year.

Participants who become infected with HIV in the community will be referred to local medical providers for care and treatment and will be counselled on how to reduce their risk of transmitting the virus.

South Africa has more than 6.8 million people living with HIV, but the country has had remarkable success in rolling out an HIV drug treatment program, which the government says is the largest in the world.

Results of the vaccine study are expected in late 2020.