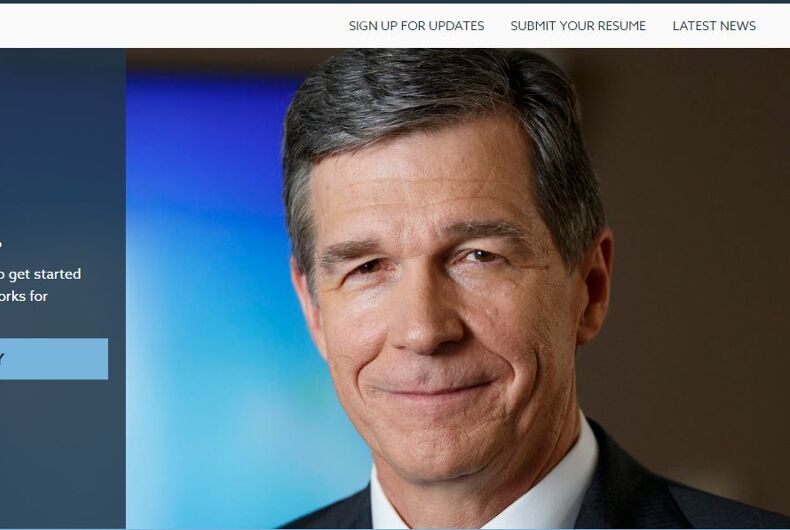 Roy Cooper has posted a "We're Hiring" message on the homepage of his transition website.Photo: Screenshot, coopertransition.org

With Election Day going on two weeks behind us, the North Carolina governor’s race drags on, with incumbent Gov. Pat McCrory trailing Attorney General Roy Cooper by about 6,600 out of nearly 4.7 million votes cast.

Cooper today announced the co-chairs of his transition team, Kristi Jones and Jim Phillips, sending a clear message that he has no intention of waiting around for McCrory to concede.

McCrory’s campaign is supporting allegations of voter fraud in over half of the state’s 100 counties.

The elections board in Durham County rejected McCrory’s call for a hand recount of 94,000 early ballots, and two other counties, Wake and Halifax, rejected complaints that included an allegation that computer issues had created improper voting conditions, WFAE reports.

If Cooper’s lead remains below the 10,000 vote threshold McCrory could call for a recount. There is even the possibility of the Republican controlled North Carolina General Assembly getting involved to determine the winner, with members of the state’s GOP lawmakers remaining noticeably quiet on the topic.

McCrory saw his approval numbers plummet after signing anti-LGBTQ House Bill 2 (HB2) into law, costing the state thousands of jobs and millions of dollars in revenue.

Jones served at the Department of Justice for more than 10 years as Cooper’s chief of staff and Phillips is a partner of the law firm Brooks Pierce McLendon Humphrey and Leonard, CBS affiliate WCNC reports.

Ken Eudy, founder of Raleigh-based communications firm Capstrat, has been named executive director of the transition, the Cooper campaign announced.

“North Carolinians voted for a change two weeks ago. I have a lot of confidence in Kristi Jones, Jim Phillips and Ken Eudy to help me assemble a team that works every day for all North Carolinians,” Cooper said in a statement. “It’s 40 days until I take the oath of office. It would be irresponsible to wait any longer to tackle the issues we campaigned on across the state.

“Why is Roy Cooper so insistent on circumventing the electoral process and counting the votes of dead people and felons? It may be because he needs those fraudulent votes to count in order to win,” McCrory campaign spokesman Ricky Diaz said in a statement. “Instead of insulting North Carolina voters, we intend to let the process work as it should to ensure that every legal vote is counted properly.”

The Cooper camp argues that any instances of voter fraud or irregularity are small in scale and will not sway the election.

Cooper has posted a “We’re Hiring” message on the homepage of his transition website.

He has also made a video declaring himself the winner and calling McCrory’s rhetoric “misleading and dishonest,” and saying it is meant to “cause confusion and fear.”

“Gov. McCrory is doing everything he can to undermine the results of this election and the will of the people, but we won’t let him,” Cooper says. “We came out ahead on Election Day and our margin of victory has only grown since then. I am confident that once the results of the election are finalized, we will come out on top.”

The people of NC have made clear that they want a change of leadership in the Governor’s Office — and that’s what we’re going to give them. pic.twitter.com/Rzg9R2VQ9E