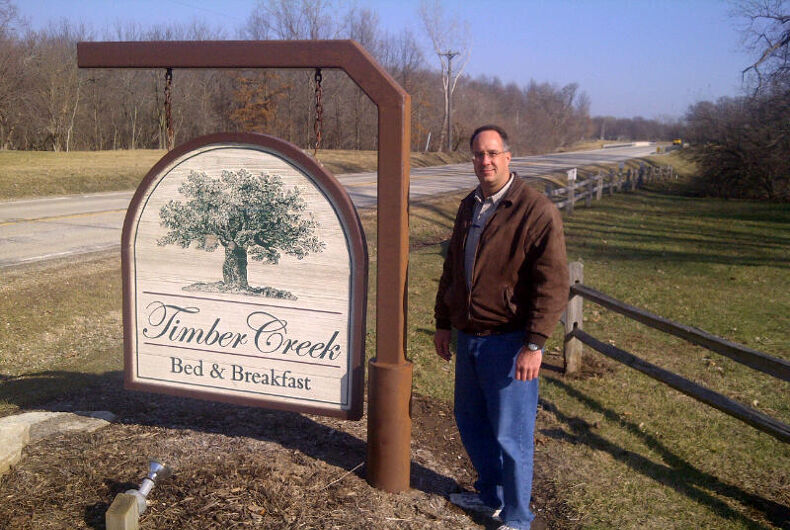 Owner Jim Walder stands beside the sign for Timber Creek Bed and Breakfast in central Illinois.

CHICAGO (AP) — A same-sex couple denied access to a central Illinois bed and breakfast while planning their civil union ceremony has won another legal victory in a five-year discrimination case that’s highlighted the conflict between religious freedoms and gay civil rights.

Owners of the Timber Creek Bed & Breakfast in Paxton contend they don’t believe in same-sex unions and refused to consider hosting Todd and Mark Wathen’s ceremony in 2011, the year Illinois legalized same-sex civil unions. However, an administrative judge ruled last year that the owners violated the state’s Human Rights Act because the couple was denied a venue based on sexual orientation.

A three-member panel of the Illinois Human Rights Commission sided with the judge earlier this month by declining to take on the case.

On Tuesday, attorneys with the American Civil Liberties Union of Illinois, among several representing the Wathens, said the move is a clear interpretation of Illinois law, whether applied to civil unions or marriage. Illinois legalized same-sex marriage in 2013 and the Wathens have since wed.

“The commission’s decision once again sends a clear message that denying couples the use of a public wedding venue in Illinois because they are gay or lesbian is simply not permitted,” said ACLU director John Knight. “Business owners cannot pick-and-choose to follow laws simply because they personally disagree with same-sex couples’ decision to marry.”

However, Jason Craddock, an attorney for the bed and breakfast owners, said he plans to fight the decision. The owners have been ordered to pay around $80,000 in damages and legal fees and allow same-sex couples access to their facilities. Timber Creek’s website still notes that they do “not host civil union or gay marriage ceremonies and/or receptions.”

Craddock said he wasn’t surprised by the panel’s move and was prepared to ask the whole commission to consider the case and, if necessary, take it beyond the agency to an Illinois appellate court.

“We’re going through all the steps,” Craddock said, adding that the owners have been “punished for living out their faith.”

The case was among several that cropped up in response to Illinois legalizing same-sex civil unions. But there hasn’t been a similar response since Illinois began issuing same-sex marriage licenses in 2014, according to the ACLU. The following year, the U.S. Supreme Court ruled that gay marriage is legal nationwide.