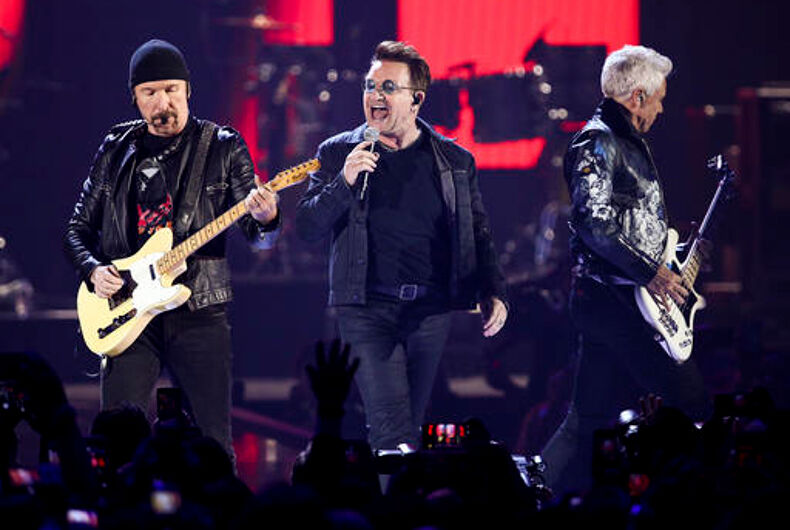 FILE - In this Sept. 23, 2016 file photo, The Edge, from left, Bono and Adam Clayton of the Irish rock band U2 performs at the 2016 iHeartRadio Music Festival in Las Vegas. Photo: John Salangsang/Invision/AP, File

NEW YORK (AP) — If you donate at least $10 to Bono’s charity (RED), the singer is giving you a chance to drink tea with him and Julia Roberts, enjoy a private concert from U2 or party in Las Vegas with “Magic Mike” star Channing Tatum.

Those are three of the “experiences” donors can possibly win after giving money to (RED), which raises funds to fight AIDS. The campaign dubbed “(RED) SHOPATHAN,” in its second year, launched Tuesday, one week before World AIDS Day, which is Dec. 1.

“It is a battle now for funding. It’s just a street battle, pitch battle, and we have to keep this stuff in the news or literally those people don’t get the drugs. It’s that simple,” Bono said in an interview with The Associated Press last week. “We have to just remind people that America has led the war on this tiny little virus and is winning the war, but it is unthinkable, but it is possible, that if we stall on funding then we start to undo all this good work.”

Other “experiences” that can be earned after donating on Omaze.com/RED include a night out with Neil Patrick Harris; tickets to see Broadway’s “Hamilton” and backstage access with show star Javier Munoz; a Snapchat and jet ski adventure with DJ Khaled; and a studio hangout with One Direction’s Liam Payne.

The campaign will return to “Jimmy Kimmel Live!” for a full show on Tuesday night, where Bono, The Killers, Herbie Hancock, DJ Khaled and Halsey will perform, while special guests include Roberts, Tatum, Patrick Harris and Kristen Bell.

Bono will sing a re-worked version of Cole Porter’s “Well, Did You Evah!” and the Killers will perform Christmas songs.

“The Killers are doing Christmas songs to end all Christmas songs,” Bono said with a laugh, “which actually, believe or not, has me singing ‘if you don’t help people with AIDS you’re going to hell.'”

“I wrote that line,” Kimmel said during the interview about the original song, written with Brandon Flowers of The Killers. “But that’s true — if you don’t help people with AIDS you are going to hell, and that seems like a good enough reason to help alone. I mean, just think of yourselves.”

Last year’s campaign offered donors a visit to the set of “Game of Thrones,” walking a red carpet with Meryl Streep and spending time with George Clooney. This year’s offers also include flying to Korea to hang out with K-Pop star G-Dragon and a “VIP Virgin event experience” with Virgin Group founder Richard Branson. Entries close on January 18, 2017.

“This is a really hopeful campaign and we try to be playful, we try not to bring anyone down, but actually the politics behind it is very serious. And the money we raise will keep people alive,” Bono said.

This year marks (RED)’s 10-year anniversary, which Bono said has raised more than $360 million and impacted 70 million people through HIV testing, prevention, counseling and other services.

You can donate here.

Is Donald Trump a fascist? Consider these 14 signs.