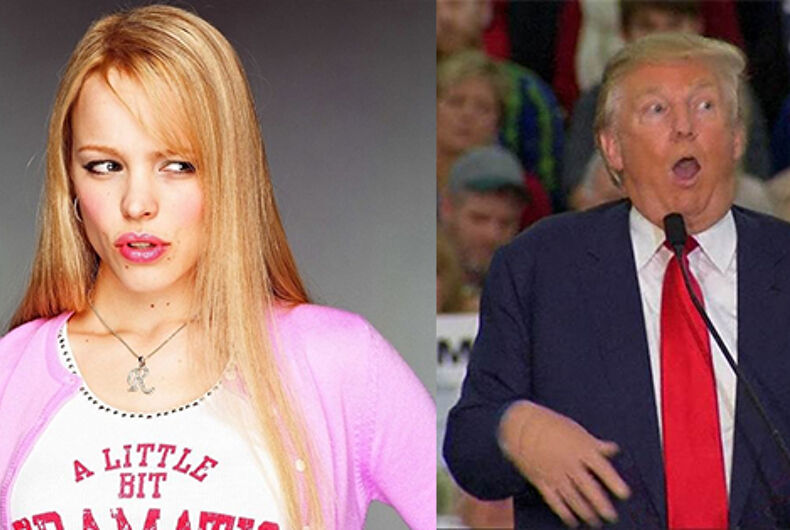 The ad starts on an intro to basic writing note by giving the dictionary definition of bullying, before playing Trump’s words, both on and off the campaign trail, alongside those of the aforementioned George, as well as Back to the Future‘s Biff Tannen, Mick from Teen Wolf, Nurse Ratched from One Flew Over the Cuckoo’s Nest, Johnny Lawrence from Karate Kid and Scut Farkus from A Christmas Story.

The comparison to Biff Tannen is particularly fitting, seeing as Back to the Future writer Bob Gale confirmed that Trump was the inspiration for that character.

The ad ends with 10 year-old Hannah Tandy asking Clinton what she will do about bullying, explaining that she has heard negative comments made behind her back because she has asthma. The clip comes from a Keota, Iowa town hall meeting back in December 2015, after which Trump claimed the event was staged, compelling Tandy’s mother to hit back, denying the allegation.

“I really do think we need more love and kindness in our country,” Clinton tells Tandy. “That’s why it’s important to stand up to bullies where they are, and why we shouldn’t let anybody bully his way into the presidency. Because that’s not who we are as Americans.”

There are a lot of bullies in this world. The last thing we need is one in the White House. pic.twitter.com/M0owOglPjy