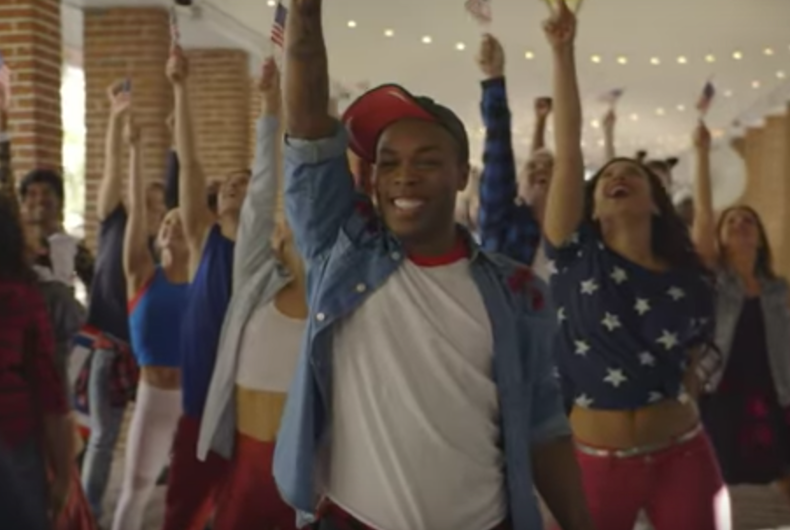 There’s more than one way to get out the vote. In an effort to attract young voters in battleground states, the Hillary Clinton campaign has enlisted YouTube stars to create viral videos on the theme #StrongerTogether.

One of these millennial-friendly ambassadors is gay singer, actor, and YouTube celebrity Todrick Hall, who brought a flash mob to a fan in Philadelphia who said she wasn’t sure if she was going to vote.

For her part, Briana looks thrilled just to be meeting Hall, who has appeared as a contestant on “American Idol,” a judge on “RuPaul’s Drag Race,” and will perform the lead role in Kinky Boots on Broadway this fall.

“I came here to give you some clarity honey,” Hall says. “This video is all for you.”

Hall and his crew proceed to perform a number appropriately called “Stronger Together,” a civic engagement pep talk in the key of “Glee,” complete with dance choreography and a marching band.

After the flash mob, Hall catches his breath and gets down on one knee to make “patriotic proposal” to his fellow voting virgin.

“I’ve never voted in my life, and you haven’t either,” Hall says. “Will you join me, November 8th, for voting for Hillary Clinton?”

“Of course I will,” Briana replies without hesitation.

Hall wraps up the video urging his fans to get out and vote—for Hillary Clinton.

“Since Beyonce isn’t running, she’s the only obvious choice,” he says.

Check out the video below.