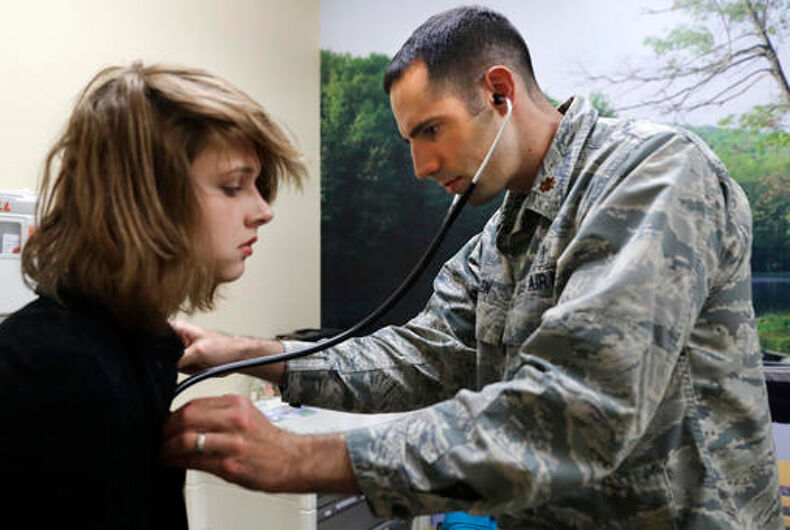 In this Sept. 7, 2016, photo, Dr. David Klein, chief of adolescent medicine at Fort Belvoir Community Hospital and an Air Force Major, listens to the heartbeat of Jenn Brewer, 13, at her monthly doctors appointment visit for monitoring of her treatment at the Pediatric Clinic at Fort Belvoir Community Hospital in Fort Belvoir, Va. Brewer is transitioning from male to female. Starting Oct. 3, the military’s health insurance will cover transgender-related services that include hormone therapy and supportive counseling. Photo: (AP Photo/Jacquelyn Martin)

ALEXANDRIA, Va. (AP) — Like many transgender teens, Jenn Brewer faced bullying when she came out. Some classmates called her “tranny,” and a few teachers refused to address the 13-year-old by anything other than her male birth name, she said.

But she and her family found that the biggest difficulty came from her father’s employer: the U.S. military.

Jenn’s father is an Army staff sergeant at Virginia’s Fort Belvoir, and his military health insurance refused to cover private counseling to support the changes his daughter was embracing. Several months later, Jenn said, she was so frustrated and distraught that she tried to kill herself.

“Nothing was working out for me,” she told The Associated Press in an interview, sitting in a coffee shop near her family’s home on the base with her mom, who encouraged Jenn by placing a hand on her knee. “And I kind of felt suffocated by all of the rules that had been put in place for people like me.”

The military insurance also wouldn’t cover the $15,000 hormone blockers that could help Jenn transition to female. But such barriers will disappear Monday, when a number of health services for transgender people will begin to be covered by military insurance.

The Pentagon announced in June an end to the military’s ban on transgender service members. The ripple effect of the new health benefits extends beyond active-duty military to include roughly 7 million retirees and children of service members, like Jenn.

The change puts support for Jenn’s mental and physical wellbeing during her transition within reach, but the new coverage also comes with controversy.

The Center for Military Readiness, a conservative group, also derides the new insurance, arguing that it covers expensive treatments devoid of any military purpose.

The new policy comes in the wake of other transgender-related mandates from the Obama administration. Driving these changes is the medical community’s belief that treatment can be considered medically necessary.

People who identify as another gender can experience various levels of distress, and studies show there is a higher risk for depression and suicide. Doctors say counseling, hormone therapy or surgery can lessen the anxiety.

The condition is known as gender dysphoria. Until now, the Pentagon lacked a policy that guaranteed coverage for it, said Eric Pahon, an agency spokesman.

In Jenn’s case, she said her feelings of being born into the wrong body began when she was 3 or 4. She came out at 11, and teachers and students at her middle school mostly supported her, although not everyone, she said.

Under the Pentagon’s previous policy, the family was unable to get counseling for Jenn at a private LGBT youth center. Jenn’s only option was a psychologist interning on the base. To the family’s relief, the intern supported Jenn’s transition, her mother, Amanda Brewer, said.

But the woman eventually left, leaving Jenn without access to a therapist for months because of staffing shortages, her mother said.

After Jenn’s suicide attempt, she was referred to another base therapist, who is supportive, her mother said. But the family faced an additional barrier when Jenn decided she wanted to begin to physically transition to female.

The family was referred to Dr. David Klein, an Air Force major and Fort Belvoir’s chief of adolescent medicine. Klein was open to starting treatment for Jenn. The first step would be hormone blockers to suppress male puberty. But the military’s insurance wouldn’t cover it.

Klein found a solution. Jenn also qualified for a diagnosis of early onset puberty, a condition that was covered by the insurance and could be treated with the same hormone blockers. Under the new military insurance, Jenn would have been covered without the secondary diagnosis.

But the new policy stops short of surgery for retirees and dependents.

A federal statute from the 1980s specifically bans military insurance from covering surgery for “sex gender changes.” The law allows the defense secretary to make exceptions for active-duty members but not military dependents or retirees, said Pahon, the Pentagon spokesman.

Harper Jean Tobin, policy director for the National Center for Transgender Equality, said the Pentagon misinterprets the law. She said cosmetic surgery is banned, not operations that many doctors now consider medically necessary.

“They’re trying to do the right thing,” Tobin said. “But they’ve gotten the interpretation wrong.”

Air Force retiree Shari Zabel of Colorado Springs plans to fight the Pentagon’s policy. She has scheduled male-to-female reassignment surgery for February. Her military insurance has already denied covering the $36,000 bill from a private facility, she said.

The Department of Defense says there is a military reason for the changes in the new policy.

“If service members are concerned about their family members’ health, they can’t possibly be functioning 100 percent to fight a war,” Pahon said.

At the coffee shop, as Jenn drank a frozen Irish cream concoction, she hesitated to go into too much detail about the struggles of the past year, instead focusing on the positive — the girlfriend she met at D.C.’s pride parade and her treatments — and often defaulting to her dry sense of humor.

“Other than being transgender, it was a pretty normal experience,” she said of the year, cracking a smile.

Oregon’s bisexual governor comes out as a domestic violence survivor