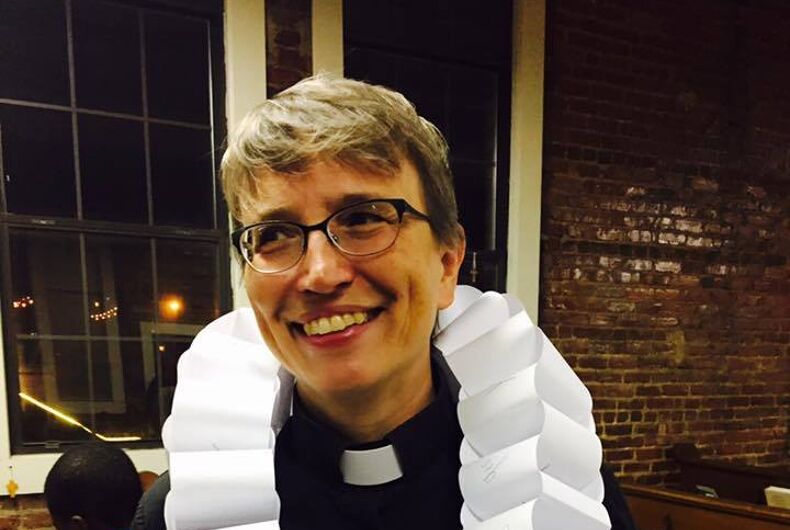 AVONDALE, Ala. (AP) — The Rev. Jennifer Sanders, an openly lesbian community minister, has been elected as the new pastor of Beloved Community Church in Avondale.

Beloved is affiliated with the United Church of Christ, one of the more liberal mainline denominations.

“I’m a woman, a lesbian, a member of a progressive faith tradition,” Sanders said.

“Beloved has always been a congregation with a justice-oriented commitment in its interpretation of the faith,” Sanders said. “I work from a liberation theology perspective. It’s not a single-issue perspective. It’s about how we honor the presence of the Holy Spirit in every person.”

Gay rights are one aspect of social activism that the church embraces.

She’s currently working on a master of divinity degree from Chicago Theological Seminary, affiliated with the United Church of Christ. She will be licensed as a UCC minister.

“I felt an irresistible call to go to seminary and go into ministry,” she said.

Sanders grew up alternately in Austell, Ga., with her mother, and in Washington, D.C., with her father, after they divorced when she was young. Austell had a small town atmosphere, she recalled. “My granddaddy was a United Methodist preacher,” Sanders said. “I grew up in the parsonage.”

She got both a small town and big city education.

“I learned at an early age to navigate in very different environments with all sorts of people,” she said.

Sander’s partner is a clinical psychologist and they have a daughter who is a high school sophomore.

“The UCC was the first mainline denomination to ordain LBGTQ ministers,” Sanders said. “That dedication to equality for all is important to the future of Christianity.”

Sanders said that she interprets the Bible as teaching love for all.

“The conservative interpretations of Christianity are not the only versions out there,” Sanders said. “I believe we are all created in God’s image and the Holy Spirit dwells in us all. People can disagree with me or my interpretation of scripture. My effort is to be faithful in all that we do.”

Sanders is not the first lesbian pastor of a church in Birmingham, but it is becoming easier to go public, especially since gay marriage was legalized in 2015.

“There’s a generation of us coming behind that first generation of pioneers who helped create that space in theology and local congregations, for us to say you can be a faithful person and be LGBTQ,” Sanders said.

She says that “homophobic theologies” run counter to the inclusive message of Jesus.

“The people Jesus took to task were the ones judging others who were in it for their own earthly power and profit,” Sanders said. “That’s the culture we live in. We live in a culture based on power and profit. It’s the harm we do each other in the quest for power and profit that’s the problem.”

Beloved Community Church, which is at 131 41st Street South next to the Avondale Brewery, holds services on Sundays at 6 p.m.

On Saturday from 8 a.m. to 4 p.m., Beloved Church will host a day of silent prayer, meditation and reflection.

“It’s just meant to be a time of reflection,” Sanders said. “It’s open to anybody, from any tradition.”

Sanders has discovered that silent prayer is one of the best ways to get diverse communities to unite.

“I would like to have an emphasis on where our liberation theology of justice intersects with more contemplative and meditative traditions,” Sanders said. “When you have that diversity, one of the places we can come together is in silence.”

There is a wisdom in the ancient liturgical traditions that has been lost to some parts of the modern church, Sanders said. “Protestants in general, it’s not our strong point,” she said. “There’s an appetite for that sort of deeper connection.”

“To have a faith that deeply engages the world and its injustices, it’s important to continually tie our faith back to those deeper roots,” Sanders said. “We need that continual nurturing and feeding of the spirit to keep doing this work.”

Sanders said she learned the power of meditation about 10 years ago while going through a difficult period.

“It made a profound difference in my own life,” Sanders said. “The silent meditation process made me more open to the workings of God in my own life, and it brings me a sense of spaciousness in my engagement in others.”

“Beloved was founded as an interracial church, open and affirming justice for the LGBTQ community, for people with disabilities, from different faith backgrounds,” she said. “There’s a genuine commitment to diversity and appreciation and engagement.”

Churches need to confront issues of inequality and injustice, Sanders said. “Our social sins of racism, homophobia, environmental injustice and economic injustice are sins against the body,” Sanders said.

“We are an opening and affirming congregation,” Sanders said. “That’s an important part of who we are.”

France will no longer force the sterilization of transgender people