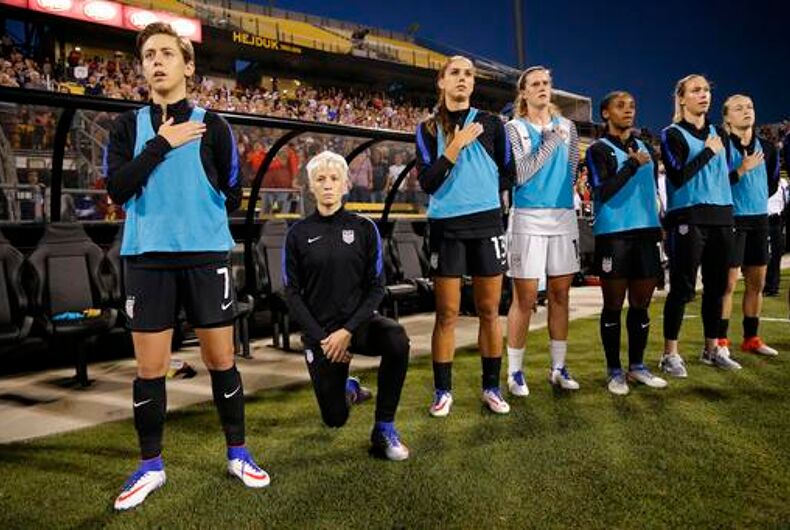 United States' Megan Rapinoe, second from left, kneels during the playing of the national anthem before the soccer match against Thailand, Thursday, Sept. 15, 2016 in Columbus, Ohio. Rapinoe did not start the game against Thailand at Mapfre stadium. She knelt from a spot near the bench while the fellow reserves around her stood. Photo: Kyle Robertson/The Columbus Dispatch via AP

Rapinoe first knelt during the anthem Sept. 4 before a game with her National Women’s Soccer League team, the Seattle Reign. She said she wanted to express solidarity with San Francisco 49ers quarterback Colin Kaepernick, who is not standing during the anthem to bring attention to racial inequality.

After Thursday night’s game, which the United States won 9-0, U.S. Soccer issued a statement to ESPN that said representing the country is a “privilege and honor” for any player or coach associated with the national teams.

“Therefore, our national anthem has particular significance for U.S. Soccer. In front of national and often global audiences, the playing of our national anthem is an opportunity for our Men’s and Women’s National Team players and coaches to reflect upon the liberties and freedom we all appreciate in this country.

“As part of the privilege to represent your country, we have an expectation that our players and coaches will stand and honor our flag while the national anthem is played.”

It was unclear whether Rapinoe would face any sanctions from the federation.

“I’m very proud to pull on this shirt and play for this country, and also represent my country in a different way in speaking out for people that are oppressed,” she told the network, which broadcast the game.

Rapinoe did not start the game at Mapfre stadium. She knelt from a spot near the bench while the fellow reserves around her stood for the anthem.

The 31-year-old, who helped the U.S. win the World Cup last year and played in the Rio Olympics, came into the match at the start of the second half.

At a game Sunday night in Seattle, the anniversary of the Sept. 11 terrorist attacks, she stood and linked arms with her Reign teammates.

Last week before a Reign match against the Washington Spirit in Maryland, the anthem was played before the teams took the field rather than “subject our fans and friends to the disrespect we feel such an act would represent,” said a Spirit statement that cited the personal beliefs of the team owner.

There was speculation that Rapinoe might refrain from kneeling before Thursday night’s game because she was playing for the United States and not her club team. It was also the final game for midfielder Heather O’Reilly, who was retiring after 15 years with the national team.

Kaepernick’s refusal to stand for the anthem first came to public notice when he remained seated on the bench before an NFL preseason game against Green Bay. Since then numerous players have joined the protest, taking a knee or raising a fist.

“Being a gay American, I know what it means to look at the flag and not have it protect all of your liberties. It was something small that I could do and something that I plan to keep doing in the future and hopefully spark some meaningful conversation around it,” Rapinoe told American Soccer Now about her motivation for the protest.