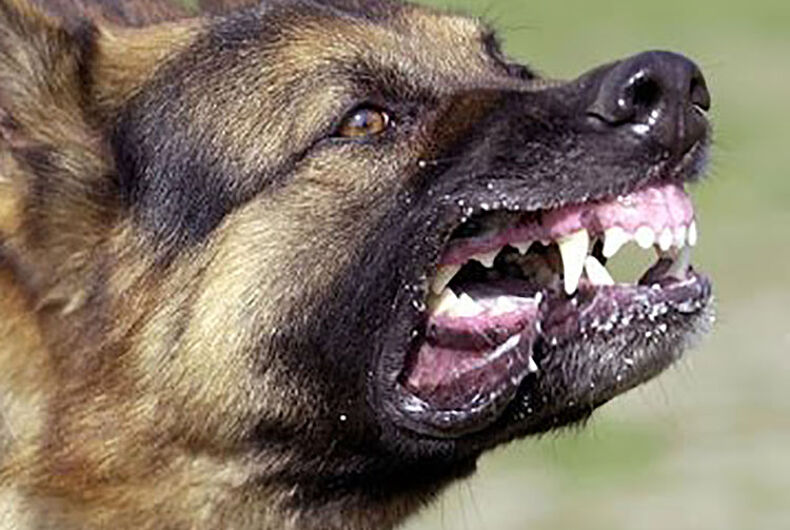 A gay man in Manchester, United Kingdom, is telling the story of how he wound up in a hospital with horrible dog bites all over his arms and legs: he claims a police officer sent his K9 partner to attack him — twice — and also hurled a homophobic slur at him.

The 55-year-old man asked the Manchester Evening News to keep his identity a secret. He shared photos of his injuries with the newspaper.

The man says at approximately 3 a.m. on August 31, he was with a male friend walking through a cemetery. From his hospital bed, he told the Manchester Evening News, “All I can remember is this dog running towards me. At first I thought it was a pit bull but as it bit into my leg I realised it was a German Shepherd type.

“An officer appeared and he had a torch or a camera with a light that he was shining on the dog. That’s how I could see its teeth ripping into my leg.”

A torch is British slang for a flashlight.

“The handler pulled the dog off and when he saw my friend he thought we were up to no good,” the victim told the paper. “He said ‘You dirty bastard.’ He set the dog onto me again. He didn’t do anything to stop. It was like he was taking pleasure in seeing me attacked.”

“I’d say the attack lasted for about three minutes, which trust me, is a long time when you’re being bitten by a dog.”

The victim said at least two other police officers joined them around five minutes later, one of whom then called an ambulance. He needed two weeks in a hospital to recuperate from his many lacerations and bruises.

The victim said he still has flashbacks and fears he’ll never ever be able to feel comfortable around a police dog again.

A police spokesperson told the newspaper they were not able to comment on the incident because the matter has been referred to the Independent Police Complaints Commission.

The victim’s brother is standing by him: “I’m furious about the entire situation,” he told the paper. “Being attacked by a police dog is one thing,” he added. “But being called a dirty bastard and having a dog set on you because you’re gay is another.”