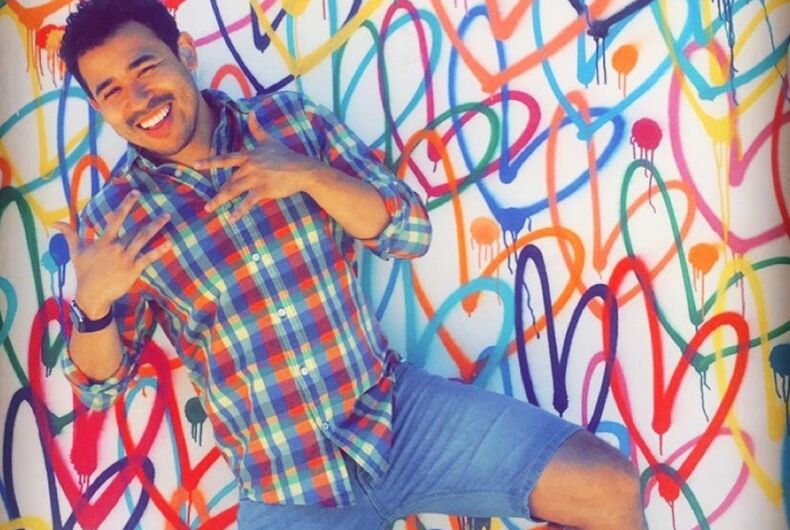 “I face a lot of interesting challenges,” he said in an exclusive interview. “At times, I do feel invisible, which can be frustrating. At the same time, it drives me more and gives me a stronger voice (or hands) as an actor-filmmaker.”

Hearts is a busy guy. He just finished shooting a guest spot on a show. He’s also hard at work on a pitch for a new web series. All that is in addition to regularly going on auditions, taking acting classes, and working on short film projects.

Luckily, he had a few minutes to chat with us about his experiences as a gay deaf man of color, the L.A. dating scene, and whether he prefers Grindr or Scruff. Check out what he had to say…

LGBTQNation: You’re basically a triple minority. Gay, deaf, and a person of color. What’s that like?

Hearts: I face a lot of interesting challenges. The biggest would be access to opportunities–an audition for a leading role, a job interview, things like that. I’m not fully considered just because of my deafness. It’s funny because I look “normal” and my deafness isn’t visible until I start gesturing with my hands. Then people are like, “Ohhhh, you’re deaf.” I also know I miss out on opportunities just because I’m a person of color, or because I’m openly gay, or both. It’s very real and, at times, I do feel invisible, which can be frustrating.

Yet despite all that, you’ve still found a way to do what you love, which is filmmaking. In fact, your short film “Passengers” earned you the Best Filmmaker title at the Disability Film Challenge last year. Where did you get the idea for the project?

I actually used to drive for Lyft for extra money and I somehow came across the 48-Hour Film Challenge, where, like it says, you have 48 hours to complete a short film. So, I decided, why not borrow from my own experiences? I also knew that I wanted to see my own kind of love story, which, of course, involves a deaf queer person as the hero.

The beginning of the film pokes fun at some of the more absurd things people have said to you about your disability. What’s the most ridiculous thing someone has ever said, and how did you respond?