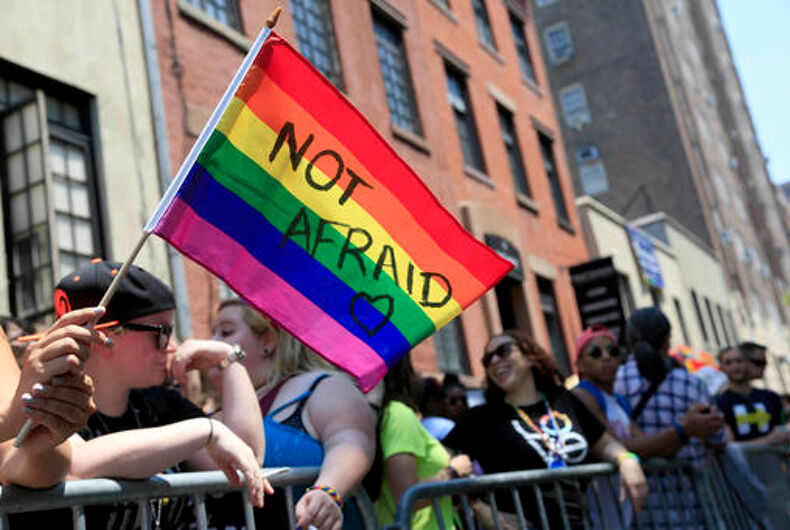 WASHINGTON (AP) — Young people in America overwhelmingly support LGBT rights when it comes to policies on employment, health care and adoption, according to a new survey.

The GenForward survey of Americans ages 18-30 found that support for those policies has increased over the past two years, especially among young whites. But relatively few of these young adults consider rights for people who are lesbian, gay, bisexual and transgender to be among the top issues facing the United States.

GenForward is a survey by the Black Youth Project at the University of Chicago with The Associated Press-NORC Center for Public Affairs Research. The first-of-its-kind poll pays special attention to the voices of young adults of color, highlighting how race and ethnicity shape the opinions of the country’s most diverse generation.

In the past two years, support has increased from 69 percent to 84 percent among young whites for policies such as allowing gays and lesbians to legally adopt children. Support among this group for employment equality for LGBT individuals rose from 84 percent to 92 percent. The poll also suggests support for allowing adoption by gays and lesbians has increased among Hispanics over the past two years, from 65 percent to 75 percent.

“People who don’t identify as heterosexual are human like we are, and should be entitled to the same kind of rights,” she said. “I have friends who are LGBT and I feel that it’s discrimination to not allow them adoption or employment or whatever.”

Young Asian-Americans, African-Americans and Latinos are more likely to support insurance coverage for transgender health issues in general than when certain specifics are mentioned.

Eighty-three percent of Asian-Americans support insurance coverage for transgender health issues, but only 63 percent say so when gender reassignment surgery and hormone treatments are specifically mentioned. Similarly, support for insurance coverage drops from 69 percent to 57 percent among African-Americans, and from 74 percent to 57 percent among Latinos. Sixty-two percent of young whites favored insurance coverage of transgender health issues regardless of whether that specifically included gender reassignment surgery and hormone treatments.

While young Americans favored LGBT rights on every issue in the poll, only 6 percent, including fewer than 1 in 10 across racial and ethnic backgrounds, consider the LGBT rights one of the top issues facing the country. Among those who self-identified as LGBT, 17 percent said it is one of the country’s top issues.

The poll of 1,940 adults age 18-30 was conducted July 9-20 using a sample drawn from the probability-based GenForward panel, which is designed to be representative of the U.S. young adult population. The margin of sampling error for all respondents is plus or minus 3.8 percentage points.

The survey was paid for by the Black Youth Project at the University of Chicago using grants from the John D. and Catherine T. MacArthur Foundation and the Ford Foundation.