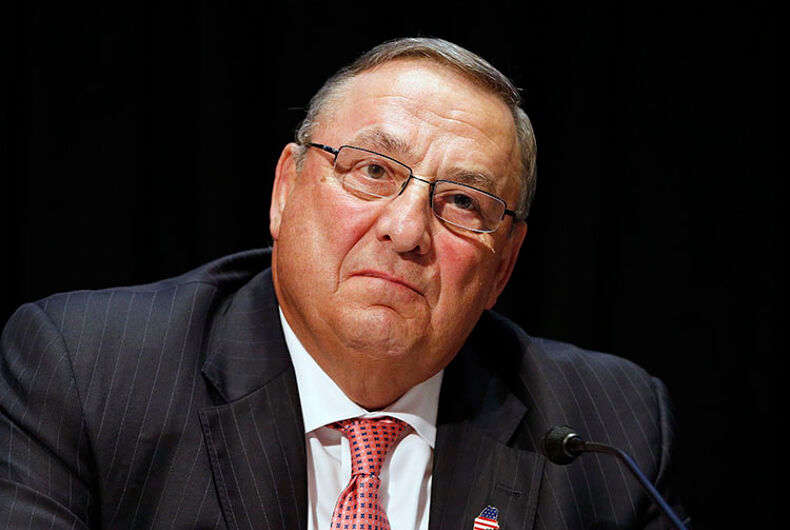 AUGUSTA, Maine (AP) — Republican leaders in Maine are trying to figure out a fitting punishment for racially charged comments and a threatening voicemail made by Gov. Paul LePage, who has repeatedly avoided punishment for impolitic remarks. Meanwhile, a top state Democrat repeated a call for the Republican governor to resign.

Republican Senate and House leaders are arranging a closed-door meeting with LePage before deciding the next step as November state legislative elections loom. House Republicans also planned to discuss the matter Tuesday.

Senate President Michael Thibodeau, for one, said he hoped LePage would take “corrective action” himself without a formal legislative censure.

LePage, however, doubled down in remarks Monday in Boston, where he attended a meeting of New England governors and Canadian premiers.

LePage won re-election in 2014 over two other candidates with the most votes in Maine history, and his unfiltered zeal for dismantling “political correctness” and tackling welfare and immigration policy has long appealed to his base of conservative, Tea Party-inspired supporters.

The governor has made headlines for comments about a lawmaker who’d “give it to the people without Vaseline” and minority drug dealers impregnating white Maine women. He escaped an impeachment effort earlier this year after successfully arguing there was no legal basis to charge him for threatening to withhold state funding from a nonprofit that hired Democratic House Speaker Mark Eves.

The controversies have often overshadowed some of his achievements, including repaying $484 million in hospital debt and cutting income taxes.

LePage apologized Friday to “the people of Maine” but not to Democratic Rep. Drew Gattine, the target of his voicemail. LePage said his outburst was justified because Gattine called him a racist — which Gattine denied.

In an obscenity-laced tirade last week, LePage called Gattine a vulgar name that can also be used as a gay slur. He also said he wanted to point a gun in between Gattine’s eyes.

Several House Republicans on Monday declined to comment, saying they wanted to be “careful” before the caucus. Rep. Paul A. Stearns, of Guilford, said in the private sector, LePage likely would have faced consequences for his actions.

Rep. Kevin Battle, a Republican from South Portland, said LePage felt provoked, though that didn’t excuse him from failing to control himself. “There’s some very upset people and rightfully so,” said Battle, who won’t be able to caucus Tuesday. “There needs to be a professional approach.”

Rep. Matthew G. Pouliot, a Republican from Augusta, said he considers Tuesday’s meeting a chance for a “call for civility.”

Rep. Michael J. Timmons said he sees it as a way to defend LePage’s record. “I have a problem with those people that are bringing heroin into our state and poisoning our children,” the Cumberland GOP member of the Joint Standing Committee on Criminal Justice and Public Safety.

LePage was wrong to react the way he did, said Republican Rep. Dick Campbell, of Orrington. But, he added, “race baiting is worse because it’s an implication of one’s character.”

Senate Democratic Leader Justin Alfond said Monday that the state should consider a constitutional amendment to allow for a recall of LePage.

However, Alfond also said LePage should step down immediately anyway and seek professional help for his rage.

“People are ashamed, they are embarrassed, they want real action,” Alfond said, adding that a recall option could be created via legislature or through a citizens’ referendum.

LePage said Friday that he wouldn’t resign unless several of his political opponents do, too.

Alfond also said it was irresponsible of LePage to plan a town hall meeting in Westbrook, the town where Gattine resides.

Maine horror writer Stephen King chimed in on the controversial remarks by calling LePage “a bigot, a homophobe and a racist.”