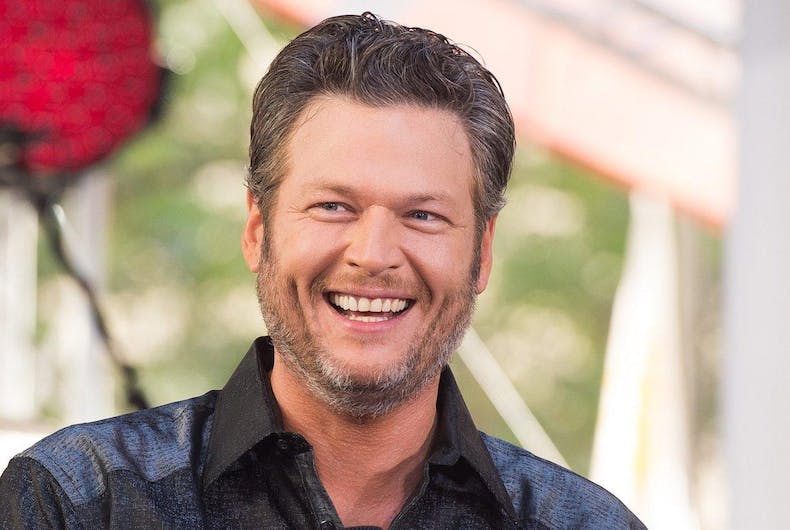 Country star and “The Voice” judge Blake Shelton has apologized for tweets that made offensive statements about gay people, women, Arab Americans and people who speak languages other than English.

His since-deleted tweets about gay people mostly recycled tired old stereotypes to craft disses like “Grown men who wear Chuck Taylor’s may as well write on their fore head ‘Cucumbers turn me on!!!’…..” Also (negatively) associated with gay folks in the tweets: Skittles and skinny caramel lattes.

The old tweets resurfaced after a Twitter user called The Music Tea (user description: “We are absolutely unbiased and we tweet facts. We serve you with exceptionally hot and shady tea. DM us your requests!!”) posted screenshots of comments posted by Shelton between 2008 and 2011 that have since been deleted.

But Shelton’s comments about gay people are mild compared to his “jokes” about women (including one that trivializes rape) and people speaking languages other than English.

One comment, which appears to have received more than 1,000 re-tweets said: “Wish the d**khead in the next room would either shut up or learn some English so I would at least know what he’s planning to bomb.”

In a statement posted to Twitter yesterday, Shelton described the posts as “comedy” and said he’s not a hater:

Everyone knows comedy has been a major part of my career and it’s always been out there for anyone to see. That said anyone that knows me also knows I have no tolerance for hate of any kind or form. Can my humor at times be inappropriate and immature? Yes. Hateful? Never. That said I deeply apologize to anybody who may have been offended.

Many fans rushed to Shelton’s defense, saying he shouldn’t have had to apologize and describing the people who circulated screenshots of old tweets as thin-skinned “troublemakers.”

As CBC reporter Lisa Christiansen said: “It’s funny because you are funny and none of these tweets are funny.”

But it’s not the first time Shelton has caught heat for anti-gay tweets. Back in 2011 he posted a “joke” in which he suggested he’d assault a man who tried to hit on him.

GLAAD called him out for the post and noted the troubling irony of the comments coming from a judge on a show with thousands of gay fans.

“This is one of the judges on what’s so far been one of the most gay-friendly reality shows on television,” GLAAD wrote in 2011. “For him to make a joke to his 300-thousand-plus followers about leaving a gay man ‘beaten, bleeding and heaving’ is completely unacceptable.”