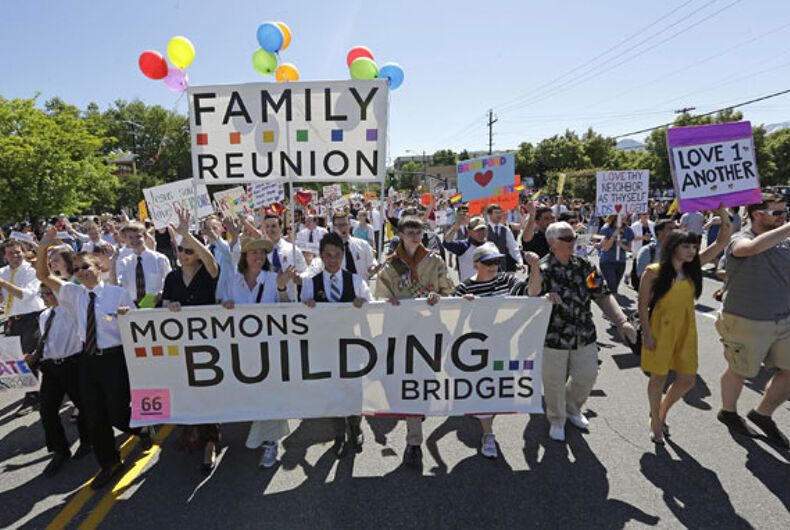 SALT LAKE CITY — Organizers of Utah’s biggest parade have turned down a float proposal from a Mormon faith-related LGBT group, citing too much potential for controversy.

Days of ’47 Parade organizers say it’s their policy to turn down any float they believe will ignite political debate during the celebration of the state’s heritage as home of the Jesus Christ Church of Latter-day Saints. The Salt Lake Tribune first reported the story.

“Our job is to remember the pioneers, and we don’t want people to have to take positions down the road on this float or that float,” Executive Vice President Greg James said Wednesday. “The real issue is, we don’t want a million messages clouding our message.”

Mormons Building Bridges aimed to steer clear of politics with a convertible car of Utah arts, business and other leaders who identify as lesbian, gay, bisexual or transgender and have Mormon heritage, said Erika Munson, founder and co-chair.

This would have been the first Days of ’47 appearance for the organization founded to support LGBT Mormons. The group avoids engaging in same-sex marriage debates, Munson said, and asks Facebook users to avoid such polemics on its page.

The 2014 parade theme, “Pioneers Pushing Toward Our Future,” matched the group’s mission, Munson said. Members of Utah’s LGBT community look to their ancestors for inspiration, who “were persecuted and marginalized and ultimately triumphed,” Munson said. “It’s a great example.”

Parade organizers say about a dozen applications are denied each year for the July event honoring the Mormon pioneers’ 1847 arrival in the Salt Lake Valley. Advocacy groups, James said, don’t make the cut. “We make no value judgment on these things.”

Mormons Building Bridges organizers tried to appeal the rejection but were denied. The group is urging Utah residents and others disappointed by the decision to contact parade organizers, Munson said.

More than 100 floats constitute the parade that draws about 250,000 onlookers and a TV audience of about the same size. A private nonprofit runs the parade, but The Church of Jesus Christ of Latter-day Saints is a large sponsor and LDS Church presidents often participate in the event.

The church has not publicly commented on Mormons Building Bridges.

Mormons Building Bridges has marched for two years in the Utah Pride Festival, which celebrates LGBT residents and is the state’s second-largest parade. The group formed in 2012.

It gathers monthly at libraries, participates in a suicide-prevention walk and helps centers for young homeless people.