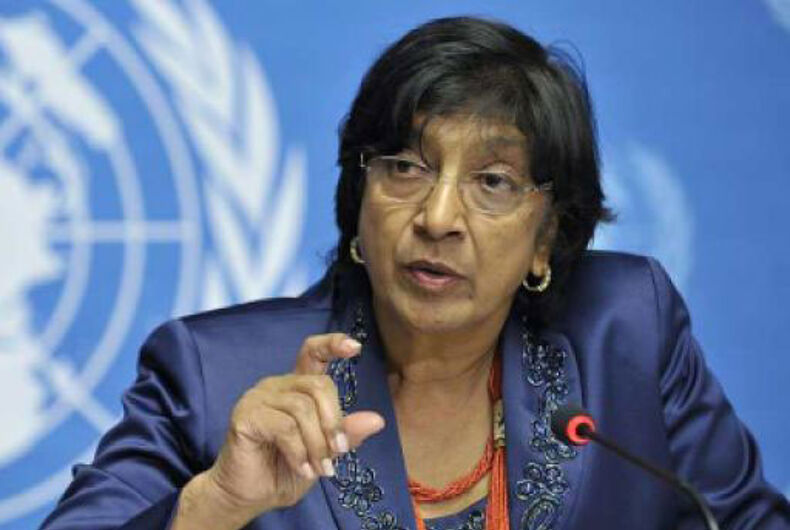 NEW YORK — Amid a surge of anti-gay violence and repression in several countries, the United Nations’ human rights office on Friday launched its first global outreach campaign to promote tolerance and greater equality for lesbians, gays, bisexual and transgender people.

Called Free & Equal, it’s an unprecedented effort by the Office of the U.N. High Commissioner for Human Rights to change public attitudes around the world on issues that have bitterly divided the U.N.’s own member states.

The multi-pronged campaign – announced at a news conference in Cape Town, South Africa – will include videos and public-service announcements distributed through social media, a new website, a series of fact sheets, and engagement by celebrities well-known in different regions of the world.

“Changing attitudes is never easy… It begins with often difficult conversations,” said Navi Pillay, the high commissioner for human rights. “And that is what we want to do with this campaign. Free & Equal will inspire millions of conversations among people around the world and across the ideological spectrum.”

There were multiple reasons for choosing South Africa as the news conference venue. It is Pillay’s home country, and is a leading nation on a continent where discrimination and violence against LGBT people is widespread.

In Cameroon, for example, two men were sentenced to prison this week for gay sex, and a gay rights activist was tortured and killed earlier this month in an attack his friends suspect was related to his activism. South Africa, in contrast, does not criminalize homosexuality and allows same-sex marriage, yet is plagued by extensive anti-gay violence, including frequent rapes of lesbians.

However, the new awareness campaign will extend worldwide, reflecting the challenges faced by gays in many countries.

In Russia, President Vladimir Putin recently signed a law that will impose hef ty fines for holding gay pride rallies or providing information about the gay community to minors. In Haiti, gay-rights leaders say their community has been targeted by a recent series of threats. In Montenegro, several hundred people on Wednesday attacked the Balkan nation’s first-ever gay pride rally, throwing rocks and bottles at activists while some yelled, “Kill the gays.”

“The Universal Declaration of Human Rights promises a world in which everyone is born free and equal in dignity and rights – no exceptions, no one left behind,” Pillay said. “Yet it’s still a hollow promise for many millions of LGBT people forced to confront hatred, intolerance, violence and discrimination on a daily basis.”

Among the dignitaries throwing their support behind “Free & Equal” was retired Archbishop Desmond Tutu, who in the 1980s was a prominent leader of the struggle to end South Africa’s apartheid system of racial segregation and white-minority rule.

“I would refu se to go to a homophobic heaven … I mean I would much rather go to the other place,” Tutu said at Friday’s news conference. “I would not worship a God who is homophobic and that is how deeply I feel about this.”

The paramount anti-apartheid leader, ailing former South African President Nelson Mandela, also has been an inspiration for Free & Equal, according to Charles Radcliffe, a spokesman for the U.N. human rights office.

“He said education is the best weapon against prejudice,” Radcliffe said. “That’s really the best inspiration for this campaign.”

At the UN, the office of Secretary-General Ban Ki-moon issued a statement commending Free & Equal and declaring that Ban “is personally committed to championing this cause.”

According to the human rights office, at least 76 countries still criminalize consensual, same-sex relationships, and discrimination against LGBT people is widespread in many other nations.

Less than half of the U.N. ‘s 193 member states have gone on record in support of gay rights and in opposition to laws criminalizing homosexuality. In March 2011, for example, only 85 states signed a joint statement at the Human Rights Council expressing their concern at violence and human rights violations against LGBT people.

Radcliffe said funding for Free & Equal is being provided by outside contributors, and is not reliant on U.N. funds, thus skirting any possible opposition from U.N. members who oppose gay-rights activism.

“Some countries may be uncomfortable with this, but our approach has been nonconfrontational,” he said. “We’re standing for the Universal Declaration of Human Rights.”

Free & Equal’s creators say they will try to tailor the messaging to mesh with regional sensibilities and cultures, but there will be common themes, including an effort to make use of personal stories.

According to a memo about the campaign, these might include accounts from paren ts of bullied children, partners of individuals murdered in hate crimes, transgender adolescents disowned by their families, and older couples forced to live their lives in hiding.

In a foretaste of the new campaign, the human rights office recently released a 2-minute video called “The Riddle.”

“What exists in every corner of the world – embraced and celebrated in some countries – but is illegal in 76?,” a series of narrators ask. “What is hidden for fear of public shame, imprisonment, torture or even the death penalty in seven countries?”

“Any campaign that wakes people up to the dang er faced by the LGBT community on a daily basis has incredible potential to help end this violence and discrimination,” she said. “The UN has a unique role to play in this effort.”

Zimbabwe president calls for the beheading of gays