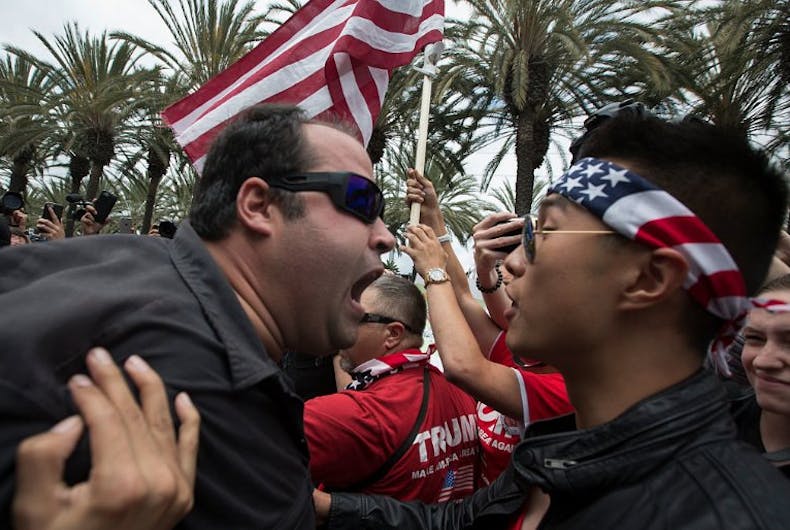 An anti-Trump protester (L) and a Trump supporter clash outside a campaign rally for Donald Trump at the Anaheim Convention Center, California.Photo: Associated Press

NEW YORK (AP) — Donald Trump awakened a movement of angry working-class voters fed up with political insiders and desperate for change. On Tuesday, that movement propelled him to the White House.

Trump’s stunning, come-from-behind victory over Hillary Clinton — a far more organized and experienced rival — served as a raised middle finger to the political establishment from his fervent backers.

“I have been so ready for this,” said Oklahoma resident Holly Berry, who flew all the way from Tahlequah to celebrate at Trump’s victory party in Manhattan.

Berry, who works in sales, said that she can no longer afford her health insurance, which has spiked 86 percent.

But to millions of others, the billionaire businessman’s elevation to the presidency is a shocking and terrifying reality that will take time to comprehend. Many see the president-elect as a bigot and a misogynist unfit for the office.

“He scares the daylights out of me,” said Wendy Bennett, a Democrat and government worker from Reno, Nevada, who cast her ballot for Clinton. “I think his personality is going to start World War III. He reminds me of Hitler.”

Lisa Moore, a registered Republican from Glen Rock, New Jersey, crossed party lines to vote for Clinton, who would have been the nation’s first female president.

“As a woman, in good conscience, and as the mother of a daughter, I can’t vote for somebody who’s so morally reprehensible,” said Moore, an exercise instructor.

The 2016 election was vindication for Trump, a former reality TV star who was underestimated from the start.

While pundits assumed his poll numbers would sink as soon as voters started taking the race seriously, Trump was drawing thousands each night to rallies packed with angry, largely white supporters who felt ignored and lied to by Washington.

While statistics showed the U.S. economy improving overall, it didn’t feel that way in places like upstate New York, Pennsylvania’s coal country and former manufacturing towns across the Midwest devastated by outsourcing and globalization. Chaos abroad only added to the feeling that the country was sliding backward.

Together, those factors drove a yearning to return to a simpler time when America was the world’s undisputed superpower and middle-class wages were on the rise.

“We have our fingers in too many baskets,” said Joe Hudson, 49, an engineer and registered Republican from Virginia Beach, Virginia, who said he would be voting for Trump because “we’re not taking care of our own people.”

“We’re trying to be too involved in world politics. And our country is imploding from within,” he said. “We need a new direction, a new attitude, and people to stop arguing and letting the media affect how we feel.”

Trump, early on, painted his supporters as a “movement” larger than himself.

The next four years are going to be awful, but just how awful is anyone’s guess