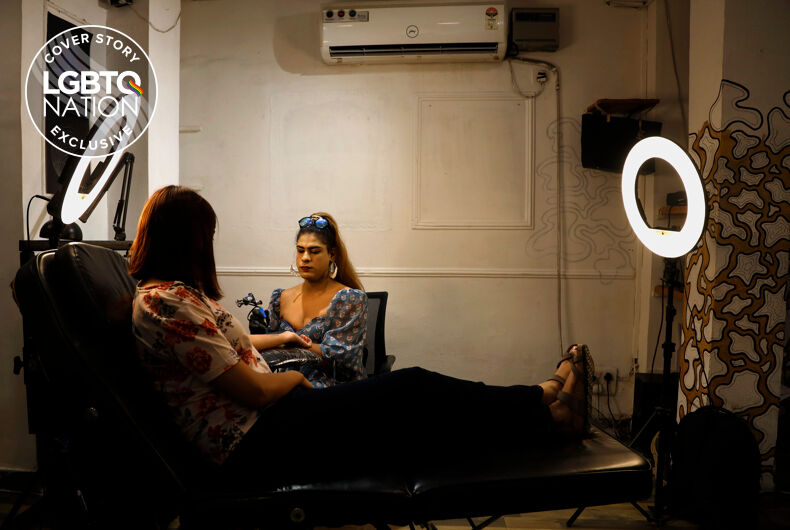 With her hair tied in a high ponytail, Bruna bends over a client, using her vibrant and outgoing personality to keep them comfortable and amused during their time together.

The services offered at the Inkspace Studio in New Delhi’s bustling Hauz Khas neighborhood are similar to those provided by other tattoo studios in the area. But the artist is unique. 27-year-old Bruna has two lives.

When catering to clients in her studio, she is a woman with an outgoing personality. But once she leaves her studio for home, she adopts the identity of a man, Akshay. While she works hard every day, juggling two different worlds is draining.

Three years ago, she was hired as a manager at the studio. Bruna always had a fascination for art and slowly fell in love with tattooing. After a three-month course, she started working as a tattoo artist.

“You will find many trans women who are dancers and makeup artists,” she tells LGBTQ Nation. “I realized there were hardly any trans women who were tattoo artists in India. During that course of time, I would always think, would anyone want to get a tattoo from a trans woman? But now I have realized that most people look at the art and not at the person.”

“It was difficult for my mother because she has always thought of me as a boy.” — Bruna

Bruna says she has felt trapped in the wrong body since childhood. She thought her family would never understand her longing for a life where she could be a woman. After her father died, when Bruna came out as a trans woman to her mother, her illusion of Akshay as the perfect son shattered. It took her two years to accept Akshay as Bruna.

“I put a lot of energy just to make it through the day. At times, it feels like I am living in two different worlds. I am a proud trans woman.

“I still remember when I was little, I liked to wear my mother’s clothes. I enjoyed it a lot, but the experience was overshadowed by the fear of being caught. At the time, I would yearn for somebody to compliment me for wearing beautiful clothes,” Bruna said.

Ninety-six percent of transgender people in India cannot get jobs, according to a study conducted by the National Human Rights Commission in 2018. They have few options to support themselves financially. Many trans individuals, especially transgender women, are forced to engage in sex work to provide for themselves.

With the COVID-induced economic downturn, Indian youth employment has deteriorated, and people from the transgender community have been among the worst hit. In this case, Bruna thinks she has been luckier than most.

“There are a lot of employers who discriminate against transsexual people, but I have been fortunate in this case. It goes without saying that India’s current state of trans employment is worrisome,” Bruna said.

When Bruna summoned the courage to come out to her family, the reaction was not one of total acceptance.

“It was difficult for my mother because she has always thought of me as a boy. It was easier for my brother because he did his degree in psychology honors. We were driving in a car when I told him about this. I still remember how he stopped the car and hugged me, showing his support and love,” says Bruna with a faint smile on her face.

“Would anyone want to get a tattoo from a trans woman?” — Bruna

In a landmark judgment in 2014, the Supreme Court of India ruled that transgender people would be recognized on official documents under a separate “third gender” category. Although the judgment helped the transgender community, there are a plethora of problems that still need to be addressed.

Despite welcoming the new law, many transgender people do not feel comfortable being referred to as the “third sex.” They simply want to be recognized as the gender with which they identify.

Bruna believes that the changes in the law have not been enough to change lives. More needs to be done to ensure that the transgender community does not face discrimination.

The Transgender Identity Certificate — a certificate issued by the government after transgender persons submit an affidavit through an online portal declaring their gender — acknowledges the gender assigned at birth and the gender with which they identify. In addition, it entitles them to use the “third gender” option.

But while applying for jobs, transgender people are often asked to identify themselves as male or female while filling out the applications. The third option for gender is often absent.

Mentioning “third gender” in a job application risks the chances of discrimination because cisgender men and women are preferred. Even if they get a job, they also face professional ostracism and discrimination in the workplace. Though these social injustices are still prevalent in society, Bruna has hope for the future. She finds the younger generation more accepting of those within the community.

“They find Akshay strange and so do I.” — Bruna

Back in school, she could not imagine being so vocal about her trans identity in the workplace. Now when she sees other people from her community sharing their experiences on social media, it gives her hope. The change is happening, but it’s slow.

“I have a woman’s identity that will never go away. I feel proud when I call myself a woman. Today, I understand what it is like to be a trans woman, the feeling of living two different lives,” she says.

Back in her studio, as darkness settles in, Bruna starts packing up to leave for home. But to the world outside, she is obligated to adopt a different identity. Even though her family has accepted her for who she is, they prefer she appear as Akshay in public, fearing the neighbors’ reaction.

She changes her clothes, removes her makeup, and takes off her wig. She doesn’t like it but doesn’t want to cause stress for her family.

If the work hours extend, she becomes restless. She is not comfortable assuming the role of Akshay in front of her clients. Sometimes she has no option but to transform from Bruna to Akshay while her clients are still in the studio.

“It becomes very stressful for me,” she admits. “I am not okay with disclosing this part of my life with other people. My clients and I have a great relationship when I am working as Bruna, and I want it to remain that way because that is who I really am.”

“They find Akshay strange, and so do I.”

While the Indian government and several institutions continue to make efforts to give transgender people legal and fundamental rights, it is a long road full of hurdles.

“There are some basic things that need to be addressed. For instance, I feel uncomfortable when I am traveling on public transport. You can see people staring right through you as if you have committed a gruesome crime. Therefore, I prefer my own vehicle over public transport,” she says.

Wearing a black T-shirt with ripped jeans, Akshay comes out of the studio and walks towards the alley where her bike was parked in the morning. The happy chatter from the bustling village brings a smile to her face; she has grown to love this part of the city where people do not judge her for being herself.

She looks at the studio door to ensure it is locked. Sitting on her bike, she drives away into the other part of her life.