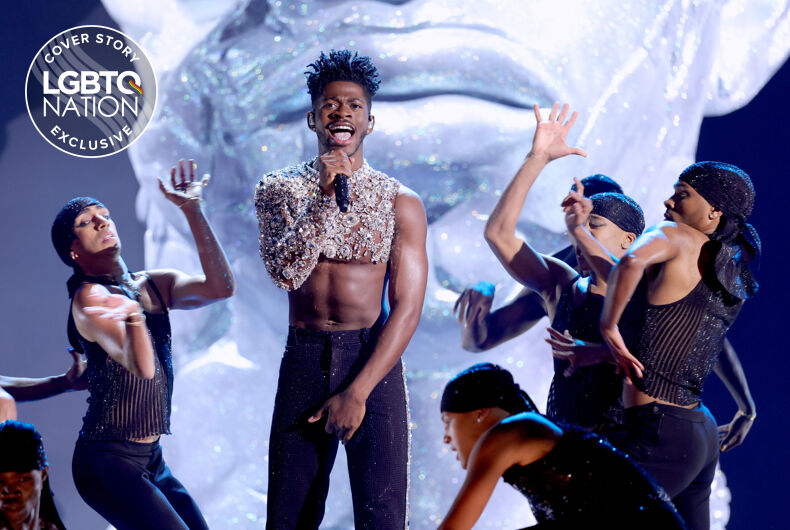 Lil Nas X’s groundbreaking tweet on the final day of Pride Month in 2019 changed the entire trajectory of his career and gained the star a slew of adoring fans in Africa’s most populous country.

Lil Nas X had come out as a gay man.

While America and other developed nations are growing in LGBTQ acceptance, and being Black and out is no longer impossible in Hollywood, it’s the opposite in Nigeria — and even a semblance of equality might not happen for a long, long time.

In a country where any deviation from heteronormativity is frowned upon, many LGBTQ Nigerians have begun to live vicariously through the star’s unapologetic approach to life as a queer person. Simply put, they don’t have the option to do so themselves.

When the Closet Means Safety

While a small, brave minority openly identifies as queer, most Nigerians keep their sexuality under wraps, guarding their personalities or vehemently denying their sexuality. Coming out also involves coming to terms with the fact that it may put their lives in danger.

Since the British invasion in 1884, the nation has been plagued by extreme right-wing religious beliefs that leave little room for tolerance and acceptance. Any form of homosexuality is punishable by law and in some parts of the Islamic northern region, death by execution. This past June, three men convicted of engaging in homosexual acts were sentenced to death by stoning under the country’s Same-Sex Marriage (Prohibition) Act. Additionally, there is a debate in the Senate to criminalize trans or trans-presenting individuals.

Queer people are often forced to choose between maintaining their closet and starting afresh if they lose everything and everyone dear to them. Coming out to one’s parents is regarded as an extremely bold step, and many who have done so have been ostracized or worse. Family members that accept LGBTQ folk are needles in the proverbial haystack.

However, that hasn’t stopped several people from living their best lives, thanks in part to the example of Lil Nas X.

“He’s made me feel seen!” a fan who asked to remain anonymous told LGBTQ Nation about the rising American music star. “Everything he’s doing… everything he’s being. That’s me! Sometimes I wish I could take his place and live in his shoes for a week. I’m not yet out to my family, but someday, when I summon his level of courage, the world will not be able to stop me.”

(Not) Hiding In Plain Sight

There are a handful of public figures who have all but come out publicly. Femme-presenting men and hypermasculine women work in the Nigerian entertainment industry. While eyebrows may be raised on social media, they are physically protected from harm and imprisonment due to their social standing and connections to powerful individuals.

Nigerian pop culture blatantly expresses the country’s disregard for any forms of femininity, and gay men are stereotyped as womanly. These expectations plague Black men. They’re expected to fit into a singular heteronormative and masculine box or face discrimination for failing to conform to a standard that no one really understands.

For Wari Pepple, a Nigerian man in Canada who recently came out to his African parents, the Georgia native’s courage and honesty mean everything.

“Celebrities heavily influence us. As a Black man, I am very appreciative of his presence in mainstream media,” he told LGBTQ Nation. “Lil Nas X provides representation for so many of us that are rarely seen on platforms as big as the one he is on. It’s exciting to see a hip-hop artist express himself outside the derogatory, homophobic nature of the genre.”

With his brightly colored outfits, risqué photo shoots, and homoerotic music videos, Lil Nas X is showing Black people in a more expressive light. He is pushing several boundaries in a way that many Nigerians don’t expect.

Nigerian conservative views on sexuality may make it difficult to live their truth, but some members of the LGBTQ community refuse to hide in plain sight. Luckily, sometimes talent trumps prejudice.

The Kohh, a Nigerian makeup artist and Instagram content creator who uses both he/him and she/her pronouns, posts photos and videos in drag on his social media pages. Like Lil Nas X, the performer receives both praise and prejudice for embracing femininity as a Black man. But his talent speaks for itself, and he has amassed thousands of followers on Instagram and TikTok.

While the rising star’s charisma is undeniable, his posts splits the crowd of affectionate fans on how to process his type of content. On one hand, his flamboyrant approach to makeup is adored. On the other, snide remarks from people who don’t get it are frequent.

Lil Nas X inspires The Kohh with his ability to create great music and commentary without giving a damn what anyone thinks.

“It’s not just about Lil Nas X’s sexuality all the time,” he told LGBTQ Nation. “The star brings so much to the table with his many talents. He has broken boundaries and proved that you can be anything you want to be, regardless of the circumstances. Despite everything, his numbers speak for him, telling you there’s a large number of people that love and cherish him. Including me.”

Lil Nas X’s entry into mainstream Nigerian music platforms is a force to be reckoned with. The major radio stations play his music, and his videos are on rotation on the music network channels. Talent, wealth, and success have a way of overcoming prejudice.

It’s also important to note that despite the country’s anti-gay stance, Lil Nas X’s status as an American and a celebrity would render him untouchable if he were to visit.

The Kohh doesn’t have that luxury.

Even though there’s uncertainty hovering above them, queer Nigerians still choose to express themselves unapologetically. Yodele, an LGBTQ activist, is especially overjoyed at the artist’s joyful expression of femininity and sexuality.

“As a pansexual Nigerian woman, Lil Nas X has definitely had an impact on me personally. He’s also shown me several possibilities that can exist in this world. When it comes to Black men expressing femininity, it’s basically unheard of,” she told LGBTQ Nation.

Worldwide, she says, society is “constantly promoting toxic masculinity to Black men, making them feel like they have to prove themselves to the world. Seeing a Black, dark-skinned man expressing his femininity is beautiful. Best of all, he doesn’t make it a caricature because most Black men express femininity as caricatures. He’s inspiring an entire generation of young Black LGBTQ people to be unashamed, unafraid, and loud.”

The superstar singer is an LGBTQ icon at 23-years-old. Many folks cannot fathom the idea that someone could be out and proud so young with the undeniable lack of room for queer artists in the music industry. Celebrities worldwide save their coming out for later in life, not willing to risk discrimination or a dip in popularity at the height of their fame.

Lil Nas X is encouraging others to be proud of being Black. He is a glimmer of hope for many young people who now have the privilege of seeing multifaceted expressions of queerness. Many LGBTQ people didn’t have that growing up. There were few idols who penetrated mainstream media and entertainment.

The rapper is at the forefront of modern artists shedding the preconceived notion of what a Black man can be. Black people should have the freedom to express themselves in any way that makes them comfortable.

Thankfully, there’s hope. LGBTQ Nigerians’ thick skin has helped them to channel their innate energy into protecting their pride. The communities that have been formed are nothing short of phenomenal. Black queer folks have found new families, colleagues, and even a chance at love, by connecting with other members of the community, and for many, they have moments in time where they can be their true, authentic selves.

One of the ways queer Nigerians celebrate Pride and each other is through their privately planned undercover parties. The ball scene in the country is very vibrant and flourishing, albeit extremely discreet. From spooky “Queerloween” parties to “New Queer’s Eve” and other themed gatherings, the community has developed an underground bread trail that leads to their very own promised land.

However, due to the secret nature of these events, word of mouth is usually the currency for participation, at least for the expensive ones. Luxury, invitation-only soirées and drag performances are usually the perks of having the right queer connections.

“It’s the few times I’m truly ever happy. No… free!” said a gay man who loves to perform in drag. “I dream that one day, I’ll perform for the best of them. From Lady Gaga to Lil Nas X, and maybe even the likes of Cher.”

Someone Who Loves Me

With the world still ahead of him, the heights Lil Nas X can achieve are impossible to know. His success is a large indicator of increased LGBTQ support today among young people. His strength and charisma are sure to keep him on top for a long time.

Despite the oppression queer people face, they still have the remarkable ability to hold onto their pride against all odds. For the younger generation especially, having someone like Lil Nas X to look up to is inspiring and a chance to hope for freer days.

Maybe he knew what many were going through when he sang:

For now, queer Africans are living vicariously through him. Some day freedom will be assured and Black queer people will be emancipated from experiencing discrimination in their motherland. Choosing to embrace their growing community of stars, Nigerians in the LGBTQ community remain hopeful that the world around them will soon see how brightly they shine.