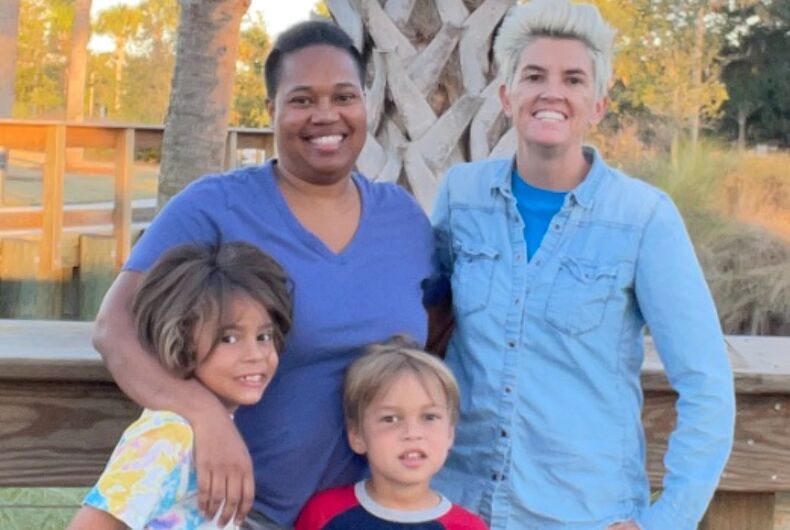 Jere Chang at upper right, alongside her family

Jere Chang’s talented and gifted students in Atlanta, Georgia are growing up in a world very different from the one she grew up in.

When she was a student during the 1980s, she and her queer peers largely stayed closeted, trying to fit in to avoid being bullied or outed. There wasn’t much LGBTQ+ representation in the media. Instead, she constantly heard about how people like her were “abominations” who “live in sin.”

She worried that her own family might disown her if she ever came out, and she never imagined she’d be able to live authentically as a lesbian.

“We lived in fear yet strived to live our most authentic self,” she says, noting that many queers took refuge in Pride events or clubs and bars to express themselves freely.

But as she aged, the world changed around her: She saw more LGBTQ+ characters appearing in books, film, and TV, more transgender people embracing their identities, and more folks using language recognizing gender-neutral individuals.

She eventually came out to her mother — who said she’d love her no matter what — and gradually came out at work. She later married the woman she loves, something made possible nationwide by the 2015 Supreme Court decision. Now, they’re raising two great kids together.

So much has changed for the better for her and other queer people, and the upcoming generation gives her even more hope.

“I have faith that the young folks are creating a much more loving and accepting world,” she says.

“In turn,” she adds, “I believe that young folks can learn from the older generation because we can relate to their experiences of coming out and/or not feeling accepted.”

Chang knows that the brave generations of LGBTQ+ activists who rose up at Stonewall and elsewhere helped pave the way for herself and other queers to live openly and happily. But “there’s still much work to be done,” she notes, at home and abroad.

She observes that it’s dangerous to live as an out queer person in certain countries. In the U.S., her queer elders face financial, social, and health challenges as they enter their senior years. She encourages others to honor them by donating, volunteering, advocating, and educating on their behalf.

This humane kindness isn’t just evident in her classroom. It also shines through the short, funny videos she shares with over a million followers on social media.

She smiles warmly while poking gentle fun at common teachers’ experiences and her students’ clever observations. Her relaxed friendliness and glow make her seem like a supportive teacher, one who is both a testament to the generations who came before her and a possible inspiration to the generations who will follow.

“I hope to make a difference for the folks who changed the course of history,”  she says.

“I hope the younger generation continues the fight to create an all-inclusive society,” she adds, “regardless of gender, love, and identity.”

In that world, no student would feel afraid of coming out. They might not need to come out in the first place — that’s a world Chang longs for, and she’s planting the seeds for its future growth.