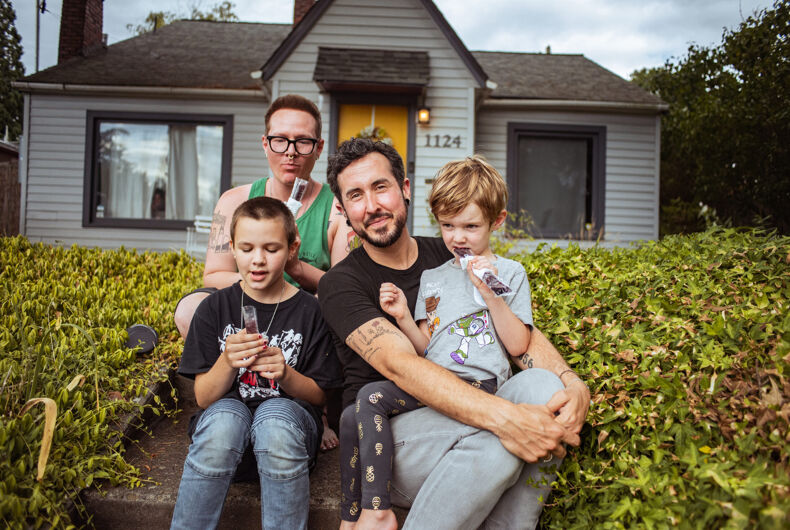 Earlier this summer, on a warm Friday evening in Portland, Oregon, a family of five sat down for a pizza dinner. The scene couldn’t have felt more traditional — three kids, two parents, and a few large cheese pies.

But Trystan Reese, 38, and Biff Chaplow, 35, are helping to redefine the word “traditional”: In 2017, the couple was thrust into the national spotlight when Reese, a transgender man, became pregnant with the biological child of Chaplow, who identifies as gay.

Hailey and Riley, who also goes by Lucas, were adopted first, in 2011, after they were removed from Chaplow’s sister’s home. The Reese-Chaplows formed a family bound together by circumstance, blood, love, and perseverance.

The media storm surrounding Reese’s pregnancy made him committed to sharing his family’s journey as a tool for awareness and advocacy. His new memoir, How We Do Family: From Adoption to Trans Pregnancy, What We Learned about Love and LGBTQ Parenthood, chronicles his still-evolving path as a parent, trans man, and queer advocate.

LGBTQ Nation caught up with Trystan, Biff, and Hailey to talk birth stories, playground teasing, and the strength of queer families.

A lot of parents say it’s a big adjustment going from two kids to three. How was it for your family?

Trystan Reese: Well, we have a teen, a tween and a toddler — so I like to say that we have “three generations of kids in the house.”

You’ve been parents now for more than a decade. How have things changed since you brought home Hailey and Lucas?

Trystan: Families like ours were a lot less common when our bigger kids were little, a lot rarer and a lot less understood. We definitely got plenty of looks; stares, you know. People were curious.

Biff: However big or small, something has definitely shifted in the culture. But I’ve also shifted; Today I’m far less aware of people being judgmental or hateful to us — now I just tune it out.  I just don’t see it — I make sure my “survivor blinders” are on at all times.

What about your kids? You can’t protect them all the time.

Trystan: But you can prepare them — which is something we’ve always done before they might start a new school or visit a new playground. We know other kids could ask, “Where’s your mom?” or “Why do you have two fathers?” We practice how they might respond, what they might say back to them. This way it feels less jarring, less intrusive, less traumatic.

There have been a few instances with kids at school asking Hailey where her mom is and she says she doesn’t have one. Sometimes the response is, “Well, what happened to her? Is she dead?” And she says, “No, she couldn’t take care of us, so my uncle adopted us and now they’re our dads.”

Hailey: I don’t really worry too much about what other kids might say about my family. Most of my friends are cool about us being different because they know that every family is different in their own way.

Even sometimes their parents don’t understand, but the kids, my friends, do. Just be yourself and be confident, and the cool people will get you.

What about their birth stories? How open are you?

Trystan: We have books and conversations — and conversations about books. We have one book we’ve begun reading to our 4-year-old that says “sperm” a lot, so half the time we’re wondering if this is appropriate for his age and the other half thinking, ‘Well, what else are we supposed to say?’

The book is What Makes a Baby by Cory Silverberg — it’s biologically accurate while also being whimsical, lyrical, and completely inclusive of all people. And it’s gender-free, which is really great.

Speaking of books, you just completed How We Do Family. You already had a publicized journey carrying and giving birth to Leo — and the press calling you “the pregnant man.” Why a return to the public eye?

Trystan: Because there was still a lot to say — still so much we felt that we could teach straight people. Initially, we saw the book talking about the lessons we learned by [building our family] outside of the mold — because we really don’t fit into the mold.

How does this interplay between sameness and difference play out on the everyday level?

Trystan: A few examples — our kids occasionally want to go by different names, such as our older son changing his name from Riley to Lucas. As queer people who have been through our own name-change processes, we know how important it is to choose your own name. So when one of our kids tells us they’d like to try out a different one, we never push back or tell them it’s just a phase. We respect whatever they’re asking to be called, and it becomes a non-issue.

And then you have Hailey’s new hairstyle. She shaved her head, right?

Trystan: Similarly, we let them explore their own personal expression as much as they want — within reason. When our daughter asked us if she could shave her head over the summer, we truly couldn’t think of a reason to say no, so we gave her the okay!

Lots of straight families we know might hesitate, wondering how others may react or if we might be encouraging something out of the norm. But we believe that it’s best to let them figure out their own expression, even if it means others might judge our parenting or if other kids might say something mean.

This kind of writing — this kind of work — is very personal, but it intersects with your professional worlds, too.

Trystan: Definitely. I’ve worked in LGBTQ political movements for a decade — the vast majority focusing on marriage equality. I met with hundreds of people face-to-face who didn’t support gay marriage, and it was my job to try and persuade and connect with them and see our commonalities. We can get to a place where we re-examine differences and no longer see them as a threat, but as a powerful tool for making us stronger as a culture.

Trystan: Of course it does. Why are there still only “mother” and “father” categories on my kids’ school forms? Why do I have to cross one out and add in a second “father”? But I am at a point now where I choose my battles wisely — choose battles where the juice is worth the squeeze — though I definitely push back if I believe it will make a true impact for my family.

The battle for queer families seems to be one you relish.

Trystan: There are many battles, large and small, to be fought on many fronts. Businesses need to ensure that fertility, surrogacy, and adoption is covered in their health insurance packages if they want to remain competitive. The best and brightest from the rainbow family want to work where they can build their own families at a price they can actually afford — we want equitable options. At the state level, many states still allow foster care and adoption agencies to discriminate against LGBTQ families.

What do you think about the recent Supreme Court ruling allowing a Christian adoption agency to reject LGBTQ prospective parents?

Trystan: I think there are always opportunities to strengthen legal support for LGBT foster and adoptive families. To turn people away when we, as a country, are in the middle of a foster-care crisis — that just seems unacceptable to me.

Culturally, I would like to see more LGBTQ families on TV and in movies. There are some great examples — The Fosters, Modern Family — but it’s always better to have more opportunities for the conversation around our families to become more common.

Do you ever worry that “straight” conventions like marriage and kids push queer people to be heteronormative?

Trystan: I mean, the quick answer is no. I don’t think anyone has ever looked at us and thought, “You folks look just like a heterosexual family.”

Biff: Some couples do fall into more conventional roles, but we actually get to negotiate a lot of these efforts. For instance I hate laundry, and I don’t ever really want to cook. And then Trystan doesn’t really like doing playdates. We just try to identify the things we each really like doing and go with it. We don’t have to follow a particular mold.

How do your kids handle the uniqueness of their family?

Trystan: They are extremely confident, they would never tolerate any negative comments from peers or friends. They’ve developed really strong, really positive ways of talking about themselves; like “this is my family, these are my cousins. This is who we are.”

Does this always work?

Trystan: Mostly, but there can still be some families in the school or community for whom our family can feel just a little bit new or different to them. And this can be a cultural thing and it is okay. It’s not that these people are necessarily bad or homophobic or transphobic—it’s more like we are just very new to them, and it just might take them a second or two longer to catch up.

I’m not saying folks get a pass for bigotry — absolutely not. But we need to understand folks where there can be a cultural or language barrier and offer them just a bit of grace.

Doesn’t grace-giving get tiring after a while?

You live in Portland, which is home to protest movements. Are you also involved in larger issues of politics and civil liberties?

I fought for the right to marry in Maine in 2010 and then around opposing the death penalty in 2011. We’ve always been on the front lines of those fights … Some of our kids’ earliest memories will be holding BLM signs at social-justice protests.

Studies show that LGBTQ parents raise kids who are more accepting of differences — of race, culture, gender and more. Is that happening in your home?

Trystan: I hope this is the case for us. We have always been deeply engaged in multiple movements for social change, and we never wanted to leave our kids out of that conversation.

As queer people, we are so used to talking about cultural differences, racial justice, fairness, and equity, that it would only make sense that the conversations and actions would seep into our parenting lives as well.

Chevrolet is matching donations to Family Equality up to $25,000
DONATE NOW

Family Equality advances legal and lived equality for LGBTQ+ families, and for those who wish to form them, through building community, changing hearts and minds, and driving policy change. Family Equality believes every LGBTQ+ person should have the right and opportunity to form and sustain a loving family, regardless of who they are or where they live.