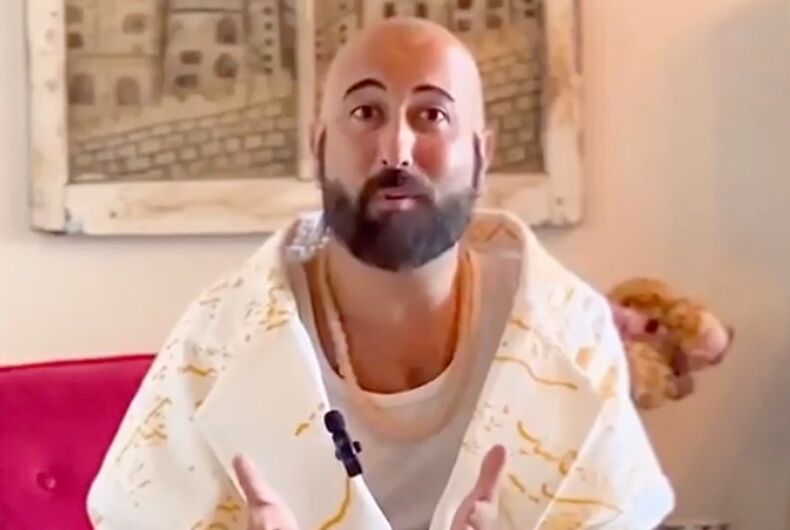 Chevrolet is matching donations to SAGE up to $25,000

SAGE is a national advocacy and services organization that’s been looking out for LGBTQ+ elders since 1978. We build welcoming communities and keep our issues in the national conversation to ensure a fulfilling future for all LGBTQ+ people.

Barry Brandon had their first major heart surgery when they were two days old. Born with a rare congenital heart defect called Shone Syndrome — a condition that wasn’t even diagnosed until they were in their adolescence — they eventually underwent seven more surgeries before reaching their mid-twenties.

“From birth into adulthood, certainty was never part of my life and that led to my making the most of time and never living by anyone else’s script,” Brandon once told Bear World magazine. “A gift of that uncertainty is also for one to live each day with uncompromising authenticity and to show up as exactly who I am.”

Brandon has blossomed into a queer, gender non-conforming fashion influencer known online as The Queer Indigo. Their Instagram photos and TikTok videos often show them posing and walking alongside their friends in world cities like New York, Berlin, and Barcelona. They show off their impeccable style and confidence as they wear flowing gowns, high-heeled boots, and other garments.

For Brandon, wearing such clothes isn’t about causing a disruption so much as showing power, commanding respect, and standing firm in their creative freedom while hopefully encouraging others to do the same.

But they also know that their ability to do this rests upon the queer activists who came before them.

“The Stonewall Generation risked their lives so that LGBTQIA+ individuals like me can live our lives authentically and unapologetically. Every day, I’m reminded of their bravery when I can step outside and be my true self without fear,” they say.

“For the Stonewall generation, the mere act of getting dressed and walking out of the door was an act of revolutionary resistance. In some ways, it still is,” they add.

Brandon feels that many people, both queer and heterosexual, don’t understand how the 1969 Stonewall uprising shaped the LGBTQ+ community’s current freedoms. It’s essential now for younger and older generations to have unapologetic conversations surrounding gender and expression and to discuss our shared history, Brandon says. Doing so honors those who came before and helps people understand that the fight for our rights continues today.

But discussing the history is just one part of passing the torch, Brandon says. The other part involves being visible in public.

“It’s so important that community members come out publicly,” Brandon says. “Visibility is activism. Visibility changes hearts and minds. Visibility impacts laws and culture, and therefore I do feel we should all be transparent and honest with ourselves and those around us, so long as we are in safe enough environments to do so.”

Queer visibility, both in public and in media, has helped make a significant difference on a global scale, they say. Brandon often receives emails from others who feel more empowered to share their stories and themselves thanks to others who have made their presence known.

“Make yourself visible, show your power, your creativity, understanding that that form of expression is contagious,” he told Padrisimo magazine. “I think that if we base ourselves on our truth, and live in it, that will be the driving force between compassion, love, and equality for a more rapid achievement towards visibility.”

Chevrolet is matching donations to SAGE up to $25,000

SAGE is a national advocacy and services organization that’s been looking out for LGBTQ+ elders since 1978. We build welcoming communities and keep our issues in the national conversation to ensure a fulfilling future for all LGBTQ+ people.