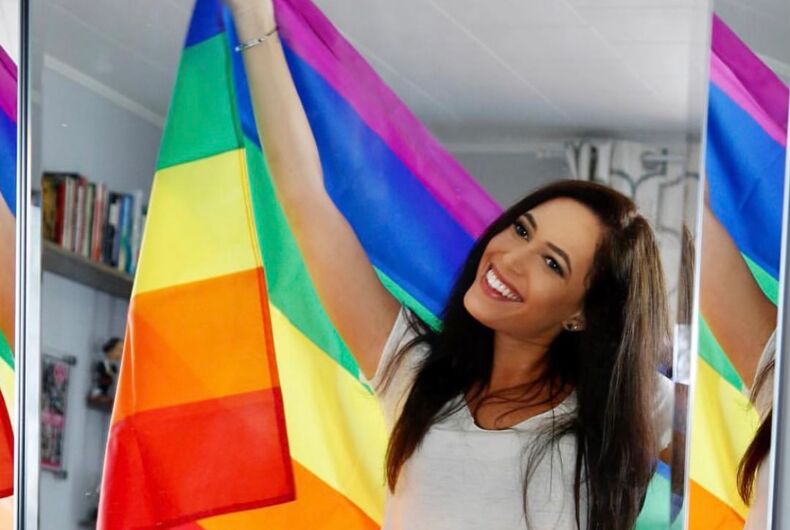 When Stephanie Frosch was a teenager, she was the only gay person she knew. She couldn’t easily find resources about being gay, and worried about the social repercussions that might occur if she discussed her feelings with a teacher.

That might explain why, in 2017, she felt alarmed when she learned that YouTube hid its LGBTQ content from younger viewers who might need it the most. After encouraging the video-sharing platform to change the policy, she has used her voice and social media platform to advocate for the queer community and its most marginalized members.

Her work has become all the more important now that legislatures around the U.S. have introduced laws restricting youth access to LGBTQ content and gender-affirming healthcare.

“Youth already have so much stress on themselves with school, tests, and decisions that will determine where and how they will start adulthood,” Frosch says. “What our youth need now more than ever is empathy, validation, support, and love.  “They should have access to hormones that allow them to look in the mirror and feel pride at the reflection looking back. They should not have to fear falling in love because it’s with someone of the same gender.”

Frosch’s advocacy work has led to her speaking at the 2019 World Pride event and the 50th Anniversary of Stonewall and other honors that she couldn’t have envisioned for herself as a younger person.

“I’m currently receiving my Ph.D. in Community Well-Being and my goal is to use my degree to create legislation that will protect the LGBTQ community,” she told LGBTQ Nation.

As she moves towards creating community mental health programs and legislation that will help dignify queer lives, she stresses that the LGBTQ community must fight for and give a voice to every member, especially to non-binary and trans women of color, intersex youth, and Two-Spirit leaders.

She also draws inspiration from her activist peers and queer ancestors, like imprisoned playwright Oscar Wilde and Stonewall veterans Stormé DeLarverie, Marsha P. Johnson, and Sylvia Rivera — all who embraced their identities despite the life-changing consequences.

“We deserve full equality, validation, and rights,” Frosch says. “Until that day comes when a black trans woman can live their truth beyond the demographic average age of 35, when a young trans child can use the bathroom without fear, when gay marriage is simply referred to as marriage, and until every member of the LGBTQIA+ community has won; we will resist, we will fight, and we will win.”