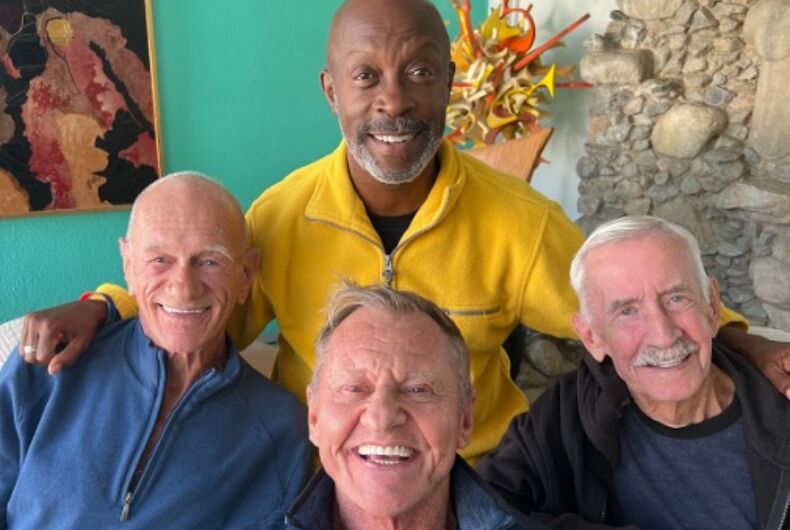 Robert Reeves and Bill Lyons never imagined that they’d survive into their 70s.

After an adolescence spent in the closet, Lyons lived a “fast life” as a younger man and worried it would soon catch up with him.

Reeves — who also grew up closeted, though in a rural Southern Baptist church that discouraged talk of sexuality — was diagnosed with HIV in 1987. At the time, his close friends and lovers were dying all around him. In the ’90s, he moved with Lyons to Cathedral City in the California desert thinking he’d be dead within a couple of years.

Instead, they continued living, and, in 2013, they met Mick Peterson, an aging gay man who rented a spare room in Reeve’s house. The following year, another aging gay peer, Jessay Martin, moved in across the street. The four men, all currently in their late 60s and 70s, soon became friends. Later, with the help of a younger gay neighbor, they set up shared social media accounts as “The Old Gays.”

In March 2021, their TikTok videos began going viral. They now have over 9.2 million followers on the video-sharing platform. They entertain audiences with their cheerfully choreographed group dances in drag as well as their hilariously candid reactions to things like Grindr, Lil Nas X, and RuPaul’s Drag Race.

But they’re also building a bridge across generations by sharing their experiences on coming out and ageism; collaborating with entertainers like dancer Paula Abdul, chatting with a younger generation of queers, and making lively public appearances at Pride events and the Coachella music festival.

“I have an autoimmune disease and almost died a few years ago,” Peterson said. He now thanks Reeves — and the videos they now make with their friends — with saving his life and infusing it with a newfound satisfaction. He doesn’t know where the adventure will take him, but it energizes them all.

“To be here and have a platform to speak to the LGBTQ community, especially the youth population, is incredible,” he told Next Avenue, adding, “Hopefully our content helps to educate people about the LGBTQ community in a way that is entertaining and upbeat.”

Their videos not only entertain. They also provide younger gay viewers with a vision of how their later years could look. The body positivity, wit, and vibrance they radiate are particularly refreshing in a culture that often sidelines queer elders in favor of youth and muscles.

“As you get into old age, moving into a nursing home is what’s expected, and many older people buy into that plan,” Reeves told The Los Angeles Times. “What we’re doing, through the strength of our friendships and our mutual support, is changing the course of the way one lives their life.”

The Old Gays were all alive when the Stonewall Uprising happened in 1969. They remember when local police departments used to regularly harass and beat up LGBTQ people. Stonewall emboldened a younger generation to fight back against such oppression and take steps to increase gay visibility and power.

“I was so grateful that these people had the balls to fight for us, because without them, we wouldn’t have the power that we have and the freedom that we live with today,” Martin said.

The foursome feels particularly engaged now, as a wave of anti-LGBTQ legislation threatens to roll back decades worth of civil rights gains made by their elders, younger peers, and contemporaries.

“To see the reversal of so much progress concerns me,” Reeves told Next Avenue. “We always need to stay vigilant and continue to fight for ourselves.”

“If you hit a wall of resistance, you are onto something,” Peterson adds. “We need to keep going. We fought Anita Bryant’s discrimination,” he said, referencing the disgraced anti-gay activist from the 1970s. ”We will continue to fight so we can move forward.”

“We’ve got our own plans for our lives,” Reeves said. “And by golly, we’re going to live.”