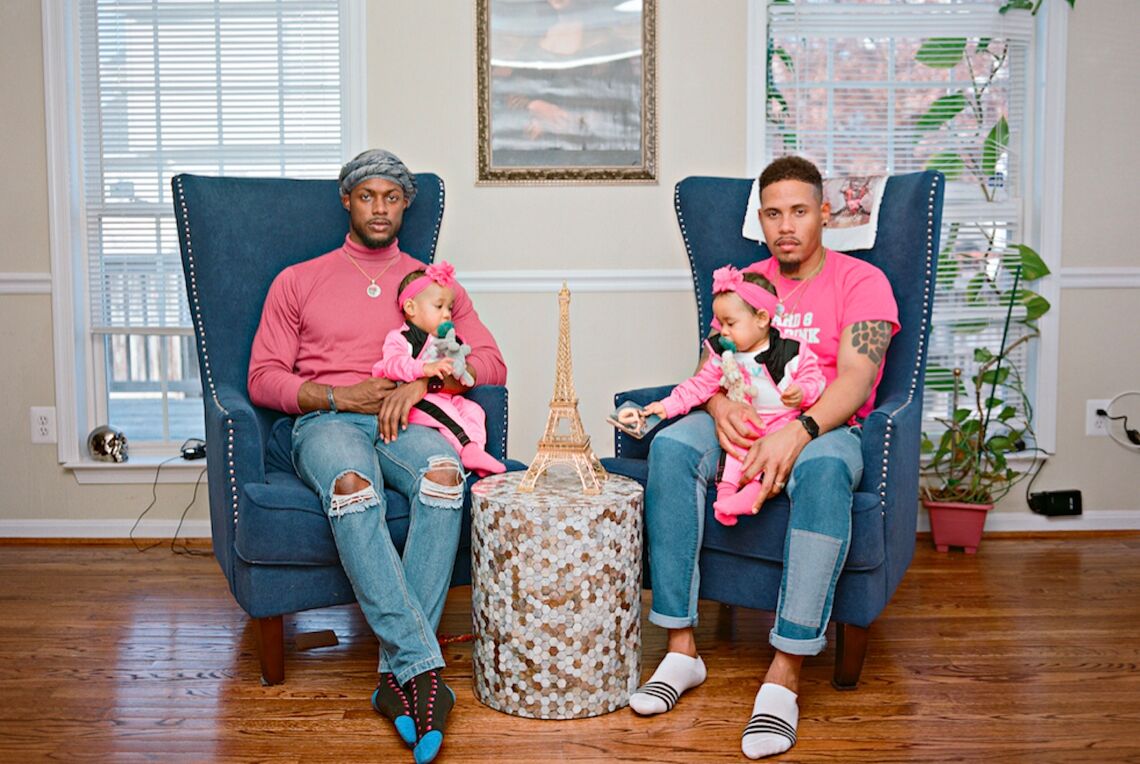 When Vernon Leftwich and Ricardo Cooper and their twin daughters, Harper Li and Knox Lia, sat for photographer Bart Heynen in early 2020, the world was a very different place.

The girls were infants, Leftwich and Cooper lived together, and masks were something you wore on Halloween.

Heynen had selected the family to appear in Dads, his coffee table photography book showcasing gay men raising children across the U.S.

Cooper and Leftwich represented a new kind of family: Having met in Washington, D.C., in 2013, they briefly dated but split amicably before pursuing fatherhood as platonic co-parents.

Harper and Knox were born via a surrogate in Canada in 2019.

Since the book’s release last year, Cooper, 32, and Leftwich, 30, continue to co-parent the girls, albeit in separate homes.

The pandemic has limited family outings and visits from loved ones, but Leftwich and Cooper have found silver linings in these trying times.

“It’s given me more time to spend with the girls, to teach them more things,” said Cooper.

Thanks to some accelerated at-home learning, Harper and Knox, now 3, were able to skip a class when they returned to in-person preschool.

“We were even able to potty train them faster while they were out of school,” Cooper said with pride. “When they returned, they were potty-trained!”

Cooper, who works at the Washington, D.C., Department of Health, earned his real estate license during the pandemic. He now works to educate the younger Black community about investing in real estate, creating generational wealth and possibly becoming realtors themselves.

Leftwich, a program analyst with the city’s Child and Family Services Agency, has been developing a brand with his three closest friends.

“Our logo is four linked hearts — a symbol of our bond,” he said.  “We have plans to circulate the Black dollar as much as we can. We want to work with Black distributors, Black-owned restaurants and bars, and marketing companies. Not just reaching that audience but bringing money to those businesses.”

Because the girls are so young, they don’t understand how extraordinary life has been these past two years.

“It’s all they know,” Leftwich said. “The other day, I was doing laundry and had a pile of masks. Harper just took one and put it on.

She was watching a movie with a mask on. I can’t wait to take mine off but she’s so casual about it.”

Harper and Knox are too young to be vaccinated, but Leftwich said everyone in their immediate circle has been responsible about keeping them safe.

“They have missed out on the kind of big family gatherings we’d normally have,” he said. “And they haven’t been to the National Zoo. I think I feel more sad than they do.”

The girls are older now — and certainly more talkative — but Leftwich and Cooper said they haven’t started questioning why their family is “different.”

“There’s no real difference for them,” Cooper said. “They have two parents who love them and take care of them. I just teach them that family comes in lots of different forms and that’s fine.”

When Harper and Knox attended day care, Cooper and Leftwich made sure the staff understood the importance of inclusivity.

“When Mother’s Day came, they’d have conversations that maybe some people don’t have mommies,” Cooper said. “Or maybe you have two mommies, or two daddies, or a grandma you can love on. Wherever they go we have to feel the school is going to be supportive and inclusive.”

Even when it comes to what Harper and Knox call their fathers, Leftwich said he doesn’t put any pressure on them.

“At first they called us both Daddy or used our first names. Sometimes they call one of us ‘my other Daddy,’” he said. “They’re gonna call us whatever they call us.”

Living in the metro-D.C. area, the family has been fortunate to avoid any really negative experiences, although even well-meaning questions can feel intrusive.

“They’ll ask if we’re babysitting, or where the girls’ mom is,” Leftwich said.  “I don’t think it’s a bad thing, necessarily. They’re just processing something they’re not used to.”

Cooper and Leftwich are working to formalize their parenting arrangement and, now that Covid restrictions have eased, both men are exploring the dating world as single dads.

“I put all my energy into parenthood for several years,” Leftwich said. “I’ve only recently started dating. I’ve just started telling myself I have permission to date.”

Cooper said that even before the girls were born, he, too, was focused on fatherhood.

“I am seeing someone, though I never envisioned that as part of the picture,” he said. “They understand that the girls are my number one priority, always.”

Cooper’s current partner is in the process of becoming a dad himself.

We kind of met by having a conversation about how I became a dad, and it grew from there,” Cooper said.

He said he believes there’s no right or wrong way to become a parent, but he would advise people not to wait.

“If you want to experience it, you should,” he said. “There’s a lot of people who are parents sort of accidentally. If you are approaching it with intentionality and love — even if you’re single — just do it. Don’t let money stop you, or other people, or your own worries. There’s never a ‘perfect time.’”

Still, Cooper said, it’s important that people understand what they’re getting into — and not just emotionally. For LGBTQ people, who often have to pursue surrogacy and in-vitro fertilization, as well as overcome additional legal hurdles, the cost of becoming a parent can quickly reach the six figures.

But the toughest part of parenthood, he said, isn’t the bills: It’s been learning to say no.

“I can tell anyone no, except for my children,” he said. “I’ll say no, but then I’ll give in. My children are the most perfect girls. How can I deny them anything?”

For Leftwich, sometimes it’s the little things that can prove the hardest, like doing Harper’s and Knox’s hair.

“You have to set aside time every day. It’s not something I was prepared for,” he said with a laugh. “YouTube is my friend.”

Along with their appearance in Heynen’s book, and a feature in LGBTQ Nation, Cooper, Leftwich and the girls were profiled in The New York Times and outlets around the globe.

“I had people from social media sending me articles in German,” Cooper said. “It was so cool that this story, and our photo, blew up. I love having that exposure out there, showing other intended parents — and other gay men, in particular – that this is possible. I love that Bart was able to capture so many different men, from different areas, and ages and backgrounds.”