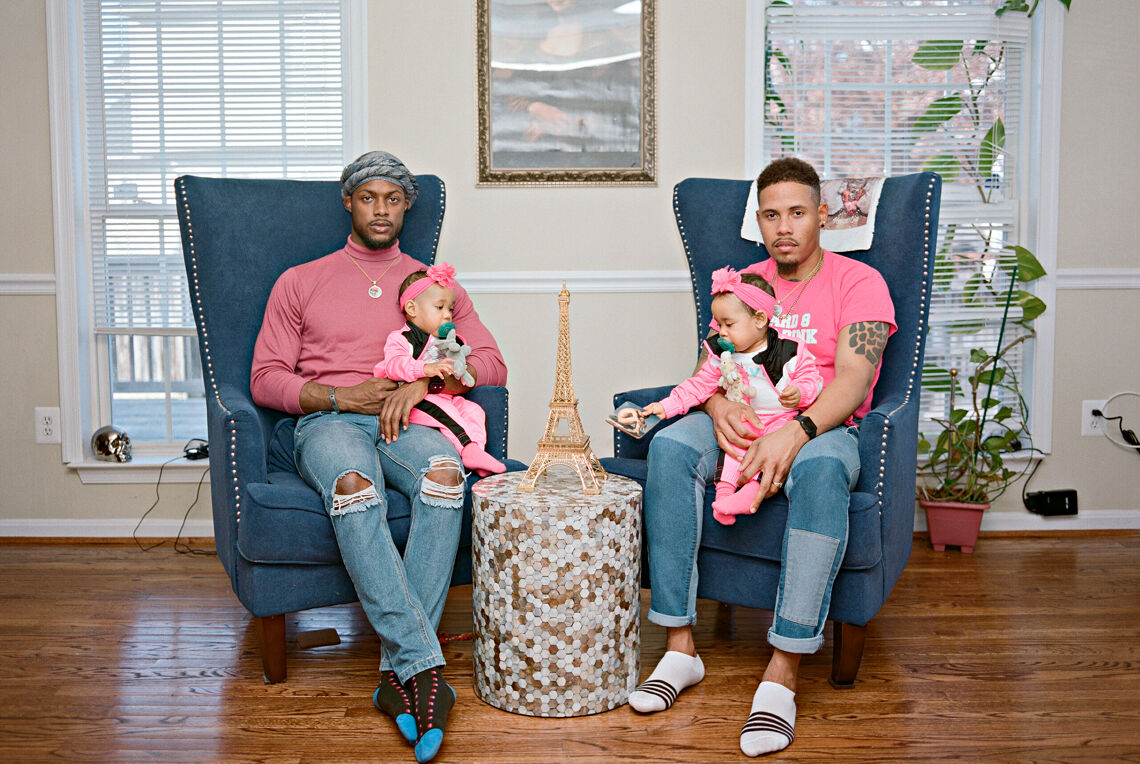 Bart Heynen is an acclaimed international portrait photographer with several monographs to his name and editorial and commercial work in Belgian and Dutch magazines.

When he’s not shooting, he’s back home in Brooklyn with his husband, Rob Heyvaert, and their two 10-year-old sons, Ethan and Noah.

Feeling a little isolated as a gay father in a straight world, Bart was inspired to embark on his latest photo book, Dads, published by powerHouse Books. It showcases portraits and profiles of gay men raising children across the U.S—in Alabama, Nebraska, New York, Utah, Minnesota, California and beyond.

“It has made me feel less lonely in being a gay father,” he says of the four-year-project. “Differences unite. We are all pioneers and trying to figure out how to do this.”

Bart may have a decade of fatherhood under his belt, but he’s not presenting himself as an expert on parenting.”

“Many books have been, and will be, written about this debate,” he says. “With Dads, I just wanted to make a book with photographs that everybody can relate to. My message is that, regardless of your sexual orientation, you should have the right to create your own family.”

Below, meet some of the dads—and children—behind the stunning photo portraits in Dads.

Jim Clay and Art Blecher got together in Washington, D.C. in the early 1980s, back when LGBTQ families were barely a blip on the cultural radar. Still, Art expressed a strong desire to have a child, and Jim, a gay activist and early childhood educator, also thought they’d make good parents.

At the time, however, D.C. adoption agencies refused to work with gay men, and other states denied adoption rights to unmarried couples. Finally, in 1989, one of them was able to adopt their infant son, Ethan, by filing for single-parent adoption.

Five years later, in 1994, the couple completed a second-parent adoption and both their names were put on Ethan’s birth certificate.

Ethan was raised in Washington, DC – first in Mount Pleasant, then in Tenleytown— and his dads say that, even given the time, they faced little discrimination. In fact, they were even able to access queer community through parenting. “Our pediatrician turned us on to another gay couple who was doing surrogacy, and we formed a lesbian and gay parenting group!”

Ethan attended a preschool where Jim was the director, and then a progressive private elementary school.  “We don’t remember any teasing.  He was in public school after that,” says Jim. “People were accepting.”

Even after a car accident in 1990, when Ethan was just 1, the rural hospital staff was respectful, the dads recall, and “accepted that [we were] Ethan’s parents.”

Today, Ethan is a married man: His wife, Rose, stands beside him in the portrait, taken at the couple’s Providence, Rhode Island, home, with his dads to their right.

“It’s interesting [how] the fence sort of bifurcates things,” Jim and Art say of the photo. “Straight/gay, young/old.”

But Art’s arm reaches across the fence to hug Ethan: “The way we’re standing shows how families bridge those differences,” they add.

In an essay at the end of Dads, the couple share their path to parenthood, including the legal complexities. They admit some friends they’ve made since Ethan became an adult had no idea what they went through, “and young folks don’t understand how challenging it was.”

Life with young children is often chaotic, but Bart captured Eric Pliner and Jonathan Bloom in a rare moment of tranquility as they, along with daughter Ruby, sons Ezra and Jeremiah, and Jonathan’s mom, Grandma Sherry, prepared for the Jewish Sabbath in their Brooklyn home.

“Our identities as queer people and as dads are inextricably linked with our Jewishness,” says Eric, who met his future husband on J-Date, a Jewish dating site.

“Judaism is super important to us, and we have found no conflict between being gay dads and being Jewish. Plenty of mainstream Jewish movements, organizations, synagogues, rabbinical schools, and universities treat their LGBTQ+ family members, students, and children with love and appreciation.”

It’s only a minority of people within the Jewish community who “get too much attention for [their] lack of loving support,” he adds, “which is not an especially Jewish value.”

While they embrace the rituals and values of their faith, Eric and Jonathan don’t focus on gender roles in their household.

“Our choices about who does what, how we engage with the kids, how we spend our time, and which parts of ourselves we bring to our parenting are based on what we think is best for us or for the kids at any given moment,” they say, “rather than our internalized sexism—which we still hold as cisgender men.”

The family’s shoot with Bart was a little over three years ago: Ruby, 5 at the time, is now 8 1/2, and the boys, just infants in the portrait, recently turned 4. Still, at this age, questions about where they came from or why they’re “different,” haven’t really surfaced yet.

“We have generally experienced greater challenge as a multiracial family than as a queer family, Eric says, “but our kids are still pretty young.”

As the children grow, he and Jonathan hope they, and children from all kinds of family structures, are celebrated, affirmed and supported.

“We want them to learn to love, [and to] value and appreciate themselves, each other, and our family because of the ways that we are different, not in spite of them,” the couple says.

Vernon Leftwich and Ricardo Cooper met at a Washington, D.C., nightclub in 2013.

“We actually saw one another two nights in a row,” Vernon recalls. “I walked past him and said hello after we just stared at one another for [both nights.] Ricardo approached me once I got to my car and asked for a hug, and we exchanged contact info.”

At the time, Vernon was just 21 and Ricardo 23. But before long, the two were dating seriously and talking about kids.

With stable jobs working for the city and a circle of supportive friends and family, the couple felt well-prepared for fatherhood. Their twin daughters were born in 2019 via a surrogate in Canada.

After an amicable breakup, Vernon and Ricardo made the decision to continue co-parenting—and cohabitating—to ensure “the best for us and for the girls.”

They both work to instill strong values in their daughters, teaching them “that being different is not wrong or a reason to be teased… that gender is fluid, that as girls they can play with cars, and boys can play with dolls,” they say. “We will raise them in a way that allows them to be receptive to all the differences this world has to offer.”

“We already had many women friends and family members prior to the girls’ birth, so the transition to support has been natural,” Vernon says. “They have so many role models and strong women of color to look up to.”

Decked out in hot pink for their photoshoot, Vernon and Ricardo wear their nonconformity proudly.  “Honestly, it was not intentionally planned,” Vernon says of the choice of apparel.

“Bart came in and asked us to be very natural and normal, and to pick outfits we would normally wear and would be comfortable in. We went to our closets and it truly just fell in place. Ricardo’s favorite color is pink, so maybe he gets some of the credit.”

Patrick Boucher and John Orcutt tied the knot in 2018. But they met almost two decades earlier in the summer of 2001, on the gay getaway of Fire Island.

“One night, my roommate and I went to Cherry Grove to have dinner, and John was our waiter,” Patrick recalls. “We were all being very flirtatious, though he thought [my roommate and I] were a couple. The next day, I ran into John while walking on the beach. He asked where my boyfriend was, and I told him I didn’t have one. The rest is history.”

What started as a “fun summer romance” became much more serious a few months later, in the wake of the terrorist attack on 9/11.

While both had expressed a desire to have children, “we never actually did anything about it until twelve years in,” Patrick explains. “Neither of us felt a particular need to have a genetic connection, so adoption came very naturally for us.”

Raising their daughter Mila in Manhattan, “where nobody bats an eyelash at the sight of gay dads and their kids,” has been a blessing, Patrick says.

“Mila’s school is very liberal and diverse. They went over all the different types of family units in kindergarten,” he adds. “If anyone asks where her mother is, she’ll just tell you, ‘I have two dads, duh,’ as if it’s the most natural thing in the world.”

Patrick and John say that, with two dads, it’s important for Mila, now 7, to also have female role models in her life.

“Not so much from a gender-specific parenting angle, but for her to know that there are no limits to what a girl can do,” Patrick adds. “She’s been to four women’s marches already, and if you ask her, ‘Who runs the world?, she’ll happily yell out, ‘Girls!.’”

They realize they’re in a fairly privileged position compared to other gay dads.

“There’s a Facebook group we’re part of called Gay Fathers, and there are often horror stories about gay men, many of whom are recently-out and in the middle of divorces from their wives, and they’re being threatened with loss of custodial or visiting rights,” Patrick says. “Even in seemingly progressive countries, adoption and surrogacy laws are not equal for same-sex or single-parent families.”

But looking at their portrait and the others in Dads, they can’t help but feel hope for the future.

“What really struck us when we got our copy of the book is the overwhelming sense of normalcy, and how the ordinary day-to-day duties of being a parent are the same for everyone,” Patrick says.

“The wonderful thing about queer families is that they’re all chosen. Everyone in Bart’s book has worked hard to either become a dad, or to stay a dad. Gay dads don’t accidentally become dads; they fight for it. And the kids are loved.”

When photographer Bart Heynen met his husband, Rob Heyvaert, 24 years ago in an Antwerp elevator, he couldn’t have imagined they’d be raising two boys half a world away in Brooklyn.

“I am having the time of my life,” Bart says. “Our kids are 10 which is a great age. They still cuddle, look up to us and enjoy all our adventures together.”

Dads, an epic exploration of queer fatherhood across the U.S, was partly motivated by his desire to show Ethan and Noah “that they are not the only ones with gay fathers.”

Being a gay man, Bart says, has made him very sensitive to discrimination and open “to everything that is different.”

It’s a value he works to instill in his boys, too.

“Ethan can get extremely upset when he’s confronted with judgments about people or things based on looks or habits that are not mainstream,” Bart says. “Although he was never bullied, he will call out bullies.” 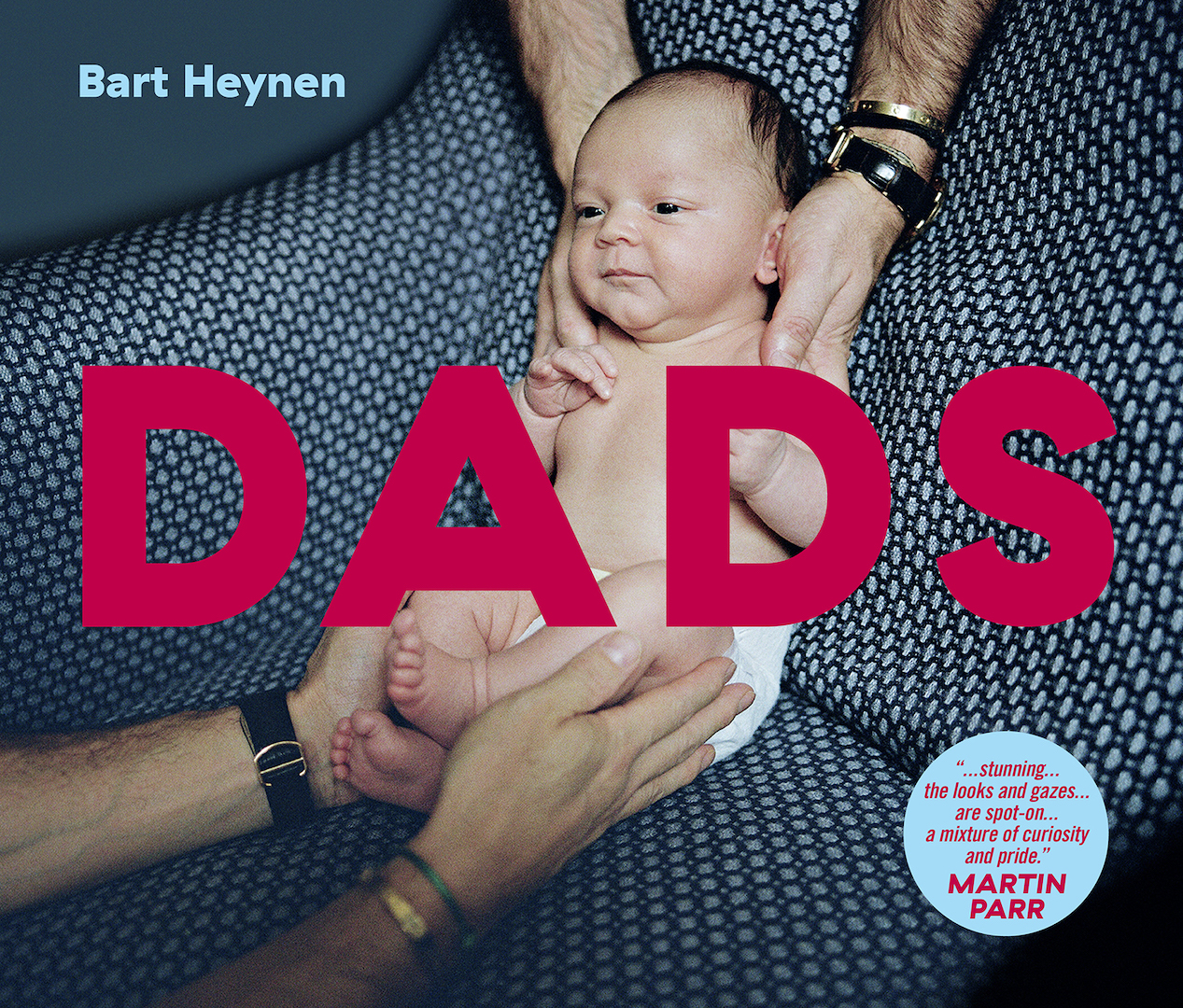