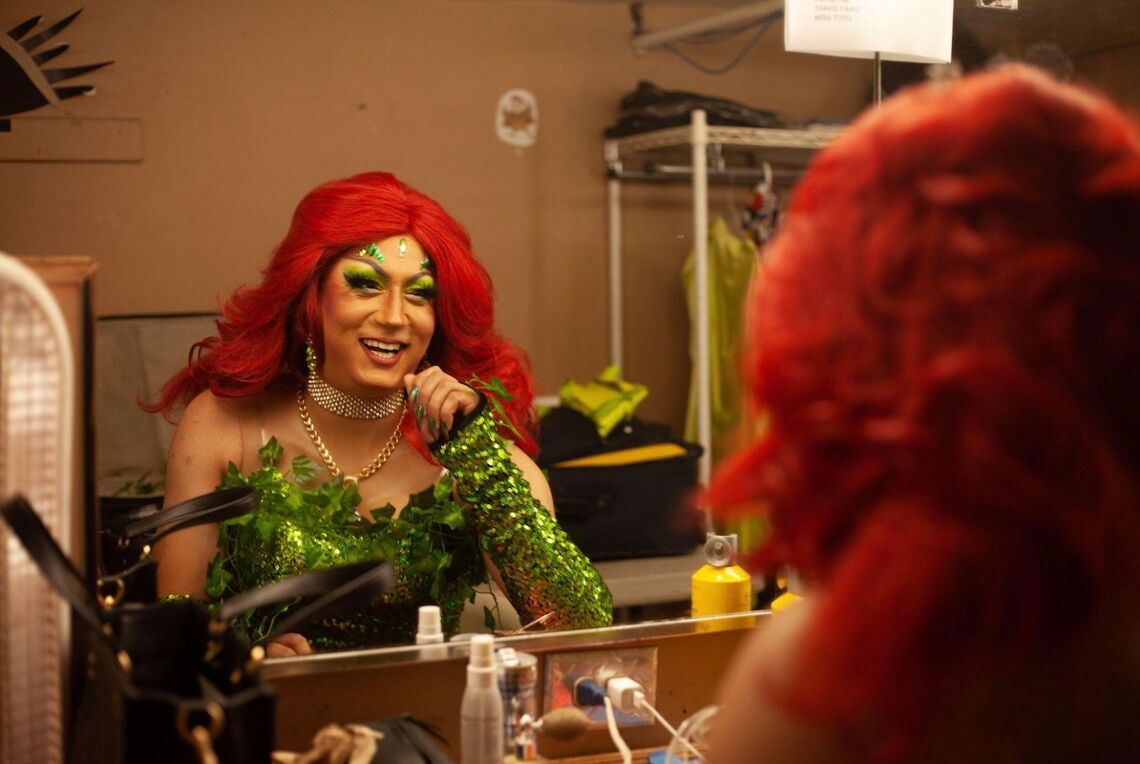 Berlin nightclub in Chicago’s queer oasis of Northalsted is at full capacity for the first time in over a year. At its grand reopening on August 26, disco balls are spinning, fog machines are clouding the air, and a throng of clubgoers is watching a tiny platform at the center of the dance floor.

From the small stage, the drag queen M.C. lifts a microphone to her overdrawn lips and shouts, “Give it up right now for Jo MaMa!”

The crowd erupts as the pulsing beat of “Sway With Me” by Saweetie and GALXARA blares through the speakers. A bejeweled goddess steps onstage and starts lip-syncing.

Jo, who identifies as nonbinary and uses they/them and she/her pronouns,  pulls off their enormous ruffled coat to reveal a glittery green-and-red gown draped with ivy. They yank off their long fiery red wig to reveal a short crimson bob underneath.

The audience goes into a frenzy, and the stage is carpeted with dollar bills.

On May 31, 2020, six days after the death of George Floyd, Jo started marching from their Edgewater apartment on the North Side — by themself and in street clothes — toward downtown Chicago to join a protest against police violence.

As they approached the Loop, Jo discovered authorities had raised the bridges over the Chicago River in an attempt to cut off protesters.

“I’d been involved in activism for almost my whole life, but I was especially called to action at that time,” they said. “I didn’t know what to do. I felt very unwelcome and trapped in my own city, thoroughly surrounded by hundreds of police officers and none of my peers.”

That feeling of alienation galvanized Jo, known out of drag as Joe Lewis, to find a Black Lives Matter march to attend the next day. This time, though, they went in drag.

So they took to the street in a neon green pantsuit and curly brown wig. Posting a picture on social media drew even more people to the march.

“All these friends showed up, just literally coming off side streets, running up to me, being like, ‘There you are, we found you! We want to march with you, we’re so excited to march with you,’” they said. “I realized that drag can be more than just a shield. It can be a beacon.”

With that in mind, Jo organized the Drag March for Change, on June 14, 2020. It was a demonstration supporting the Black Lives Matter movement, and calling for justice for George Floyd, Breonna Taylor, and other victims of police violence.

“I originally thought it was going to be maybe me and 100 of my closest drag friends just out in the street, screaming for justice in drag,” they said. “And then it became something so much bigger.”

The march drew thousands of attendees. Some were in drag, many weren’t. The event culminated in speeches from Chicago drag performers including Lucy Stoole, Miss Toto and RuPaul’s Drag Race alumni Shea Couleé, the Vixen, and Dida Ritz. Another Drag March for Change was held this June.

More than a year later, Jo MaMa said people still are coming up to say how grateful they were for that event. “They were then able to go to all these other things and bring in more friend groups and continue to work on their own, which has always been the main goal.”

On the heels of that success, Jo was determined to keep up the momentum. “I gave up a good chunk of my lifespan, I think, in planning that march,” they said. “I was like, ‘I can’t waste all this effort. I refuse to go back to the way things were. I just can’t.’”

Working with local LGBTQ activist Tatyana Chante, MaMa founded the Chicago Black Drag Council last year. The organization is dedicated to fostering “a sense of togetherness, while identifying and completing actionable steps towards restorative justice,” according to its mission statement. It works to combat racism and hold nightlife venues accountable for discrimination.

Tracy Baim, co-founder of Chicago’s gay newspaper, Windy City Times, and current president of the Chicago Reader, has been reporting on the city’s queer nightlife for decades. She’s seen the discrimination that’s taken place there firsthand.

“It’s certainly not new that there is racism in Chicago gay nightlife,” Baim said. “As a community grows and self-segregates, it becomes more common to see these kinds of things happen, where racism rears its ugly head.”

As patrons in bars and clubs, people of color have faced mistreatment, Jo said, and as performers, they’ve been tokenized or forced to conform to the standards of white showrunners.

“A lot of times, we as Black performers don’t get the opportunity to grab the mic, or to even be heard,” Jo said. “We’re written off easily, or the space that you’re given is minimal compared to what’s given to others. Initially, we just came together to build.”

The council worked with the Northalsted Business Alliance to ditch the “Boystown” nickname, which Alliance spokesperson Lake Alen said was always synonymous with gay white men, “a small segment of a very broad community.”

Or as Jo put it, “A rose by any other name would smell just as sweet, but not if that rose is racist.”

For now, the neighborhood’s name has reverted to Northalsted, but a slew of ideas for replacements are on the table, including Jo’s suggestions: Rainbow Road and Pride Park.

The council also facilitated a roundtable with managers from more than 30 neighborhood nightlife venues, who committed to fulfilling three demands: diversity training for all club employees, inclusive promotional materials that feature more than just cisgender white men, and a zero-tolerance policy for prejudice among their staffs.

The forum has resulted in a tangible evolution in Northalsted’s culture, Jo said, making it far more inclusive than it ever was “in the before times,” prior to the pandemic.

​​”We’ve seen a change in behavior that way that has trickled down to the populace,” Jo said. “When I’ve actually gone out, I’ve seen a huge difference in the actual demographics. I see a lot more young Black people out now than I did in the before times. A lot, a lot more.”

Baim agreed, saying that marginalized people are now unafraid to claim space, even at venues where they’ve historically been unwelcome.

“These days, people are like, ‘No, I’m going to go where I want to go. And I’m going to make sure they know I know I have a place here, and that they can’t discriminate against me,’” she said. “People are feeling even more empowered to fight back.”

Jo said they often speak with managers and venue owners individually to help them respond to incidents and hold them accountable when they create unsafe spaces, be it through IDing mostly people of color, discriminatory dress codes, or exclusive lineups for drag shows.

“We definitely are a resource, moving forward with all the bar venue owners and hopefully setting an example to the city, and then the nation at large, on how to straighten it out,” they said. “The main thing, I think, is that we are a Black-led organization. We try to forge that pathway in all that we do and create a space that didn’t really exist in the before times.”

For Jo MaMa, forging their own path started early, while growing up in East Atlanta, where they were drawn to drag at a young age.

“I remember being 5 or 6 and putting on my mom’s Maybelline lipstick, her ’80s power dresses and little tiny heels that we got at the Salvation Army, just to look in the mirror at myself and be like, ‘Ooh, I’m so pretty!’”

Jo’s passion for activism started early, too: they and their siblings were raised attending protests and speaking their minds. They even started a club in their high school for students to discuss controversial issues, for which they had to fight faculty when the group’s conversations started leaning progressive.

Jo was 18 when they first performed in drag, jumping onstage at Burkhart’s, a since-closed club in Atlanta, wearing a wig borrowed from their mom.

“I was totally underage — shouldn’t have been there,” they said. “But I jumped in and did ‘Fantasy’ by Mariah Carey. And it was a horrible mess.”

But it was a fun mess and pushed them to take drag more seriously when they moved to Chicago in 2008.

Compared with Atlanta, “it was night and day,” they said. The city’s less conservative attitude afforded Jo the freedom to explore their queerness, including finding their nonbinary identity.

“In Chicago, I had a bigger chance of getting a bigger piece of something, or at least a bigger bowl to swim in,” they said. “I found a home in drag and was able to start my career.”

The next step in that career, though, is uncertain. Jo is returning to their pre-pandemic career as a bartender at Berlin, where they also work as a producer and performer.

But activism will always be a part of their life, they said.

“As far as a clear goal, I don’t have one because I don’t have the data to choose it yet,” they said. “I do know that I love to help people, and that however best I can do that, I’m down.”

Jo is still dedicated to helping Northalsted evolve into a more diverse and inclusive environment — a real-life Sesame Street, they said.

“Sesame Street didn’t have racism. It didn’t have bigotry. And if they ran into an incident, they solved it as a community, and they solved it in the open,” they explained. “There was an emphasis on joy and education and getting along, but still respecting each other’s spaces.”

They encourage everyone to find their own path to activism, no matter how small it may seem.

“A lot of people think that you have to be on the mic in front of 1,000 people to make a difference,” Jo said. “But with your neighbor, with your mail carrier, with the grocery store clerk, with the person on the train — there’s all these different little opportunities during a conversation or interaction to advocate or be an activist for your own platform, for the betterment of humanity.”

Jude Cramer is a writer at INTO Magazine with a focus on queer pop culture and entertainment. He is a student at the Medill School of Journalism, Media, Integrated Marketing Communications at Northwestern University.