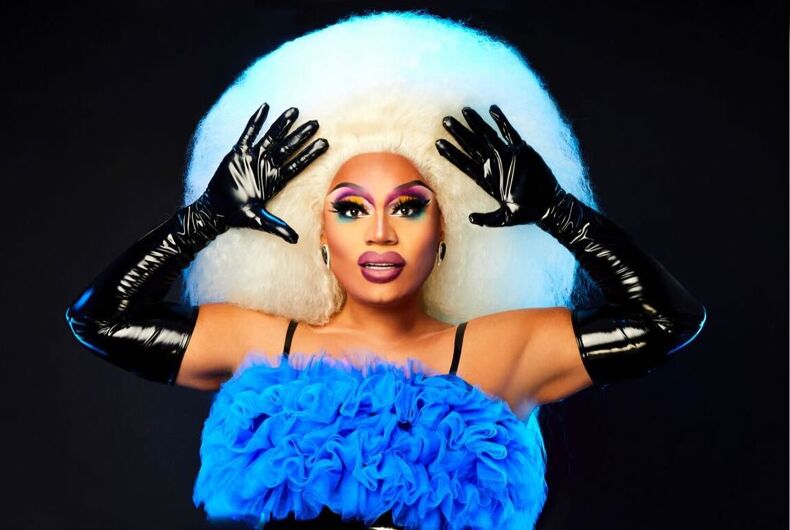 Brita Filter said that she never felt true pride in herself until she became a drag queen.

Growing up poor in a Mormon family, she remembers feeling entranced by circus performers and ice skaters she saw as a kid. After her parents bought her tickets to see a touring production of The Phantom of the Opera, she became absolutely obsessed with theatre. By high school, she began performing in regional children’s theatre and eventually received a music scholarship and studied opera performance before pursuing musical theatre at the American Musical and Dramatic Academy in New York.

Brita Filter worried that, as a gay male performer, she might come off as too feminine. But she began to take pride in that femininity when was cast in a professional production of Cinderella. The production had all the wicked stepfamily members played by men in drag. Acting in the show eight times a week, she got to practice her makeup and start imagining a persona.

Eventually, she emerged as Brita Filter, a larger-than-life, high-energy queen who liked to joke that her performances were “anything but pure.” She drew inspiration from the drag queens she enjoyed seeing out at clubs and the strong singers she looked up to, like Jennifer Hudson, Aretha Franklin, and Patti Lupone.

Brita Filter has since made her name as an award-winning New York City nightlife performer, her supporting role on the Comedy Central series Broad City, a backup dancer for Katy Perry on Saturday Night Live, and an alumn of the world-famous reality competition RuPaul’s Drag Race.

“I just love the art form,” Filter said in an interview. “You are your own artistic director. You decide the makeup, how you apply it, the clothes you wear, what kind of number you do, how avant-garde you want to be. Everyone has their own character. People are obsessed with it too, which is awesome.”

She loves that drag provides her the opportunity to give back to the community. She has done so, not only as a performer at Pride events across the country, but also as an activist. She helped organize the Women’s March for reproductive rights, was a participant in a “mobile drag show” to revive New York City nightlife after the COVID-19 pandemic, and performed as an outspoken member of Drag Out the Vote, a non-partisan campaign where drag personalities encouraged LGBTQ people to vote in upcoming elections.

Brita Filter still faces the challenges, performing seven nights a week while maintaining her mental health as a blossoming online celebrity. But she hopes her drag can give people joy and that her advocacy can inspire others to take pride in themselves and their communities.

“Drag taught me to not be afraid,” she said. “Drag has taught me how to be proud of myself. Pride is loving yourself no matter what.”