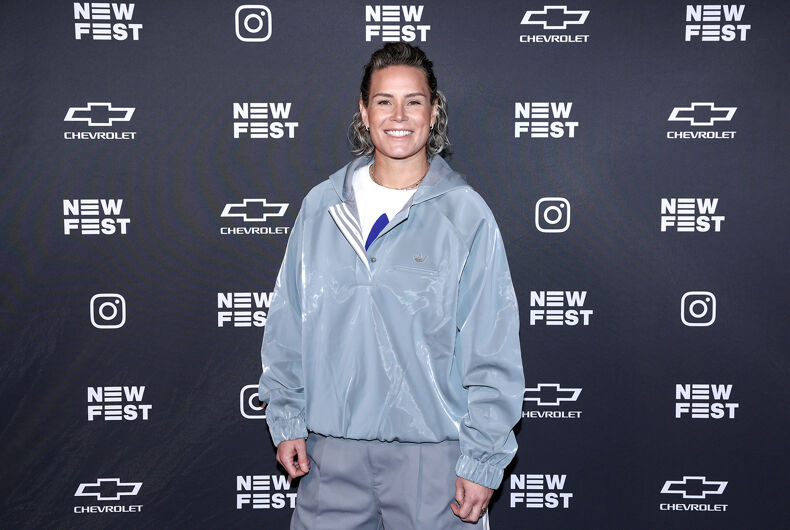 Queer film enthusiasts and creators from around the world gathered in New York City this October for NewFest’s 34th annual LGBTQ+ Film Festival. The 13-day festival showcased groundbreaking work in various genres, including the latest installments of the original docu-series “Authentic Voices of Pride.”

Since 2021, LGBTQ Nation, in collaboration with Chevrolet, has been producing documentaries as part of an editorial series with deeply researched articles about each topic — each highlighting a different issue bringing context and original reporting, profiling how real people, activists, policymakers, and thought leaders are creating change and driving a conversation.

“The stories in these documentaries tackle the challenges and fear we are facing, but in these stories, we’ve tried to harness the ferocity that queer and trans people possess, and that is often required of us just to survive,” said producer-director Alex Berg. “Through working on this series, I’m continually amazed by our subjects’ vulnerability and their willingness to share their stories at a time when publicly identifying as queer is a great risk.”

Each documentary was also paired with an organization at the story’s center, with Chevrolet donating over $225,000 in matching funds to nearly a dozen LGBTQ organizations, along with reader contributions. The screening included “Parenting LGBTQ Children” (benefitting PFLAG), “Inclusion in Sports” (benefitting Athlete Ally), “Exploring Small-Town LGBTQ Life” (benefitting CenterLink), and a preview of “The Stonewall Generation” (benefitting SAGE).

I love to talk about my queerness, and I love, love, love being a part of this beautiful community of people.” —  Ashlyn Harris

“I am a firm believer that I live life through storytelling. I love to talk about my queerness, and I love, love, love being a part of this beautiful community of people,” Harris said. “And when I get to listen, hear, watch, and be among such incredible people, it’s inspiring to keep doing what I’m doing. I continue to try to knock down doors… to keep fighting for these kids — for my own kids — to be able to talk about their mothers in school.”

Berg also acknowledged the intergenerational aspect of the series. Parents and children, professional and student-athletes, and the Stonewall generation laying the groundwork for today’s young leaders provide a nuanced portrait of the challenges faced and triumphs achieved by queer Americans.

“I think that what everyone is doing here is educating everyone and letting them know that you can be out. You can be who you are,” Asapansa-Johnson Walker said. “And you can thrive in society.”

Despite what may often feel like an uphill battle, a recurring theme emerged throughout filming the series: reasons to hope. In addition to celebrities like Leslie Jordan and Busy Phillips and star athletes such as Ashlyn Harris and R.K. Russell, the documentaries also profiled everyday folks making an impact in their communities.

“I think what’s most important is that we’re all interconnected, right? We are queer folks; we are family. That is, first and foremost, our connection to each other,” Nguyen said. “We can lean on each other. That is the foundation of our community.”

As a parent, Cleveland finds inspiration in her children as the next generation of queer voices and allies. “These kids are out here doing it, okay? They live out loud,” Cleveland said. “It makes me feel like, wow, the world is really changing. These kids — that is what speaks to my spirit.”

But Fisher quickly pointed out that the young woman she is today is only because of the role model she saw in her mother, solidifying the impact of our birth families.

“My mom looks at me and sees that it is okay to be out and proud. I live who I want to be. I wear what I want to wear. I do what I want to do,” Fisher, who is now a college student majoring in forensics investigation, said. “And my mom looks at that, and she sees a person that is stern and okay. She’s standing with her head held high, but those are things that I learned from her. I learned to be a leader, not a follower.”

Throughout the series, “Authentic Voices of Pride” has revealed intimate portraits from all walks of life. Though challenges may lie ahead, their stories prove that resilience is always at the core of the queer community.

Previous article
We use cookies on our website to give you the most relevant experience by remembering your preferences and repeat visits. By clicking “Accept”, you consent to the use of ALL the cookies.
Cookie SettingsAccept
Manage consent