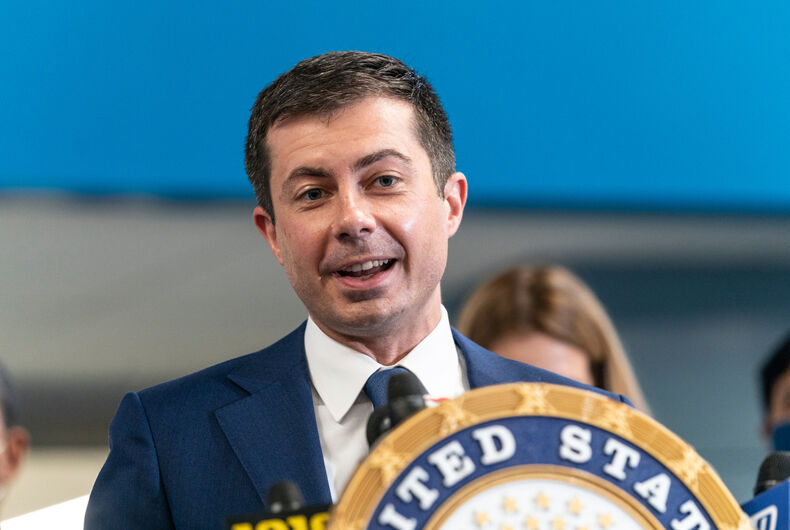 With Sen. Debbie Stabenow (D-MI) announcing that she will not seek reelection in 2024, the internet is abuzz with speculation that out Secretary of Transportation Pete Buttigieg could run and become the first out gay male U.S. senator.

“Inspired by a new generation of leaders, I have decided to pass the torch in the U.S. Senate. I am announcing today that I will not seek re-election and will leave the U.S. Senate at the end of my term on January 3, 2025,” Stabenow said in a statement.

Stabenow has served in the Senate since she won her first Senate election in 2000. Challenging her in the Democratic primary in 2024 would have been an uphill battle for any Democrat in the state. Still, now that she isn’t seeking reelection, the seat can be more easily won by other ambitious Democrats in the state.

Buttigieg started his political career as the mayor of South Bend, Indiana, a red state with few options for career advancement for an out gay politician. He ran for president in 2020, conceding in the primary and endorsing President Joe Biden. Biden took a liking to him and nominated him to head the Department of Transportation.

Since Buttigieg is widely believed to have presidential ambitions still, the question is what his next step will be. Being the first out gay Cabinet secretary has provided him with valuable D.C. experience, but the position of Transportation secretary isn’t a traditional stepping stone to the White House.

Last year the Buttigieges purchased property near Chasten Buttigieg’s hometown of Traverse City, Michigan, ostensibly to be closer to his parents as the family recently expanded with the adoption of their twins.

A Politico report in December said that Buttigieg’s allies in D.C. have established a dark money group and a PAC called Win the Era Action Fund and Win the Era with an eye to future campaigns. However, it’s not clear what he was planning on running for.

Stabenow’s announcement might answer that question, and social media speculated that he could run for the Senate seat.

Michigan has a very deep bench of Democrats who could fill Debbie Stabenow's shoes: Elissa Slotkin, Mallory McMorrow, and Pete Buttigieg among them. Will be a very interesting primary. https://t.co/h9xi0I0TTX

Michigan Senator Debbie Stabenow will not run for re-election in 2024.

Who thinks Pete should run for Senate?

“I am fully focused on serving the President in my role as Secretary of Transportation, and not seeking any other job. We are hard at work to rebuild the nation’s infrastructure, grow the economy, and create good-paying jobs,” Buttigieg said in response to the news about Stabenow, according to NBC reporter Henry J. Gomez.

“Senator Stabenow is a force in the Senate and fights every day to make life better for Michiganders and all Americans. I’ve been honored to work with her, and look forward to continuing to work with her during this Congress.”

More Buttigieg: “Senator Stabenow is a force in the Senate and fights every day to make life better for Michiganders and all Americans. I’ve been honored to work with her, and look forward to continuing to work with her during this Congress.”

So, for now, speculation is all there is that Buttigieg could throw his hat in the ring for the seat.

In her statement, Stabenow, 72, thanked the people of Michigan and said she would spend more time with her family.

“I am so grateful for the trust the people of Michigan have placed in me,” she said. “I am also deeply grateful to my incredible staff, who are the best team in the United States Senate. They continue to set the highest standards for service in Michigan and across our country.”

“When my term ends, I intend to begin a new chapter in my life that includes continuing to serve our State outside of elected office while spending precious time with my amazing 96-year-old mom and my wonderful family.”

Former Pope Benedict’s funeral is today. His legacy will harm LGBTQ+ people for decades to come