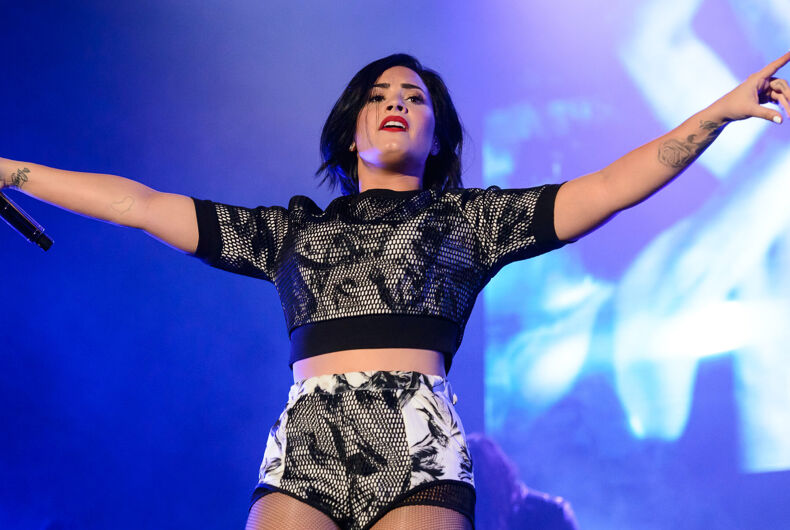 The United Kingdom has banned a poster featuring pansexual and non-binary pop singer Demi Lovato, saying it is offensive to Christians.

Just four days after the posters appeared at six different sites around London, four people filed complaints to the Advertising Standards Authority (ASA), the UK’s self-regulatory organization overseeing the advertising industry. The complaints alleged that the posters were “likely to cause serious or widespread offense” and were “irresponsibly placed” where children could see, CNN reported.

In a report released Wednesday, the organization wrote, “The image of Lovato … in a position with [their] legs bound to one side which was reminiscent of Christ on the cross, together with the reference to ‘holy fvck’, which in that context was likely to be viewed as linking sexuality to the sacred symbol of the crucifix… was likely to cause serious offense to Christians.”

The ASA told Universal Music Operation Ltd., the music company behind the UK release of Lovato’s music, neither to re-publish the advertisement in its offending form nor to promote offensive ads in the future.

christians turn a blind eye to thousands of ped0philia cases in church, can be openly homophobic and say disgusting things but then get offended over a harmless poster. anyways HOLY FVCK by Demi Lovato out now! https://t.co/bLrJCRIrTe pic.twitter.com/m819mSY15V

But Polydor Records, the Universal label that released Lovato’s newest album, denied that the ads were offensive.

It’s possible that Lovato and their promoter deliberately used the provocative art, album title, and the resulting governmental censorship to generate media coverage around their new work and to paint the musician as a counter-cultural iconoclast. Other artists have sometimes courted public outrage to gain notoriety in similar ways.

Lovato was certainly aware months ago that their album’s new title might be censored during public broadcasts.

“I remember being the one asking questions, like, ‘Am I gonna be able to say this? And what do I say instead?’” the singer said in a July SiriusXM interview. “And it’s just like, look, it’s f**king rock n’ roll. They’ll bleep you if they need to and, like, if they don’t, even better.”

Even before coming out as queer, Lovato gained some lesbian fans with their 2015 tune “Cool for the Summer,” a song in which Lovato sings about hooking up with a girlfriend for the sunny season.