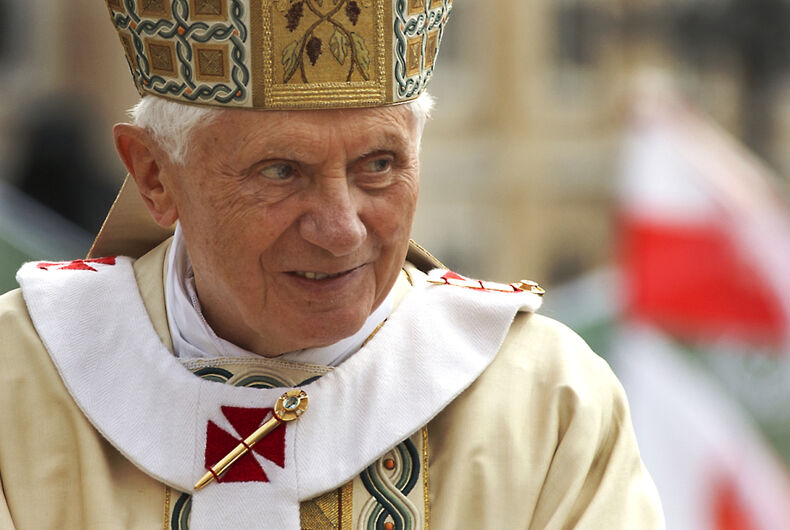 Pope Benedict XVI, a.k.a. Joseph Ratzinger, died over the Christmas holidays. Many Catholics will recall the legacy of his papacy with mixed feelings.

First and foremost, Benedict’s papacy will be remembered for mishandling the Church’s sex scandal cover-up. As the archbishop in Munich, then-Cardinal Ratzinger sent out a letter in 2001, ordering all his bishops, under the threat of ecclesiastical punishment, to observe “papal secrecy” to keep sex abuse allegations concealed from both the public and the police. Benedict moved pedophilic priests from parish to parish like pieces on a chess board. The Vatican defended Benedict’s actions, stating critics are looking for “easy scapegoats and summary judgments.”

The archbishop of Boston, Sean O’Malley, released a statement depicting Benedict as a man who “was very concerned with relativism and the truth being compromised.” As a church traditionalist, Benedict’s truth ruled with an iron fist and he used his authoritarian and “Rottweiler” persona to maintain the ecclesiastical structures of the ancient church

Sadly Benedicts’s anti-modernity views on AIDS and women’s role within the Catholic hierarchy were both retro, reckless, and spiritually abusive. For example, he stuck by his no condoms policy even in an age of AIDS.

Benedict publicly bashed a group of U.S. “dissident” nuns for “focusing its work too much on poverty and economic injustice, while keeping ‘silent’ on abortion and same-sex marriage.” Benedict accused these sisters of promoting “certain radical feminist themes incompatible with the Catholic faith.”

However, his venomous public condemnation of LGBTQ+ people was unrelenting.

“It is impossible to overstate the damage Pope Benedict’s repeated dehumanizing of LGBTQIA+ people has caused,” Marianne Duddy-Burke, Executive Director of DignityUSA, wrote in an open letter. “Individuals, families, and whole communities across the globe suffered tragic consequences, many of which are still felt today.” DignityUSA is the world’s oldest organization of Catholics working for justice, equality, and the full inclusion of LGBTQ+ people in the church and society.

For example, Benedict injected his voice in the presidential election of 2004. Benedict instructed American bishops to read his declaration that any “catholic politician” (i.e., John Kerry, Joe Biden, Nancy Pelosi, etc.) who did not denounce gays and abortion could not receive communion.

Benedict’s infamous Christmas sermon denounced same-sex marriage, advocating it would destroy the “essence of the human creature.” In previous sermonic anti-LGBTQ+ diatribes, Benedict stated that marriage equality is a “manipulation of nature” and threatens world peace.

“Although the particular inclination of the homosexual person is not a sin, it is more or less a strong tendency ordered toward an intrinsic moral evil,” Benedict stated in a 1986 “Letter to the Bishops of the Catholic Church on Pastoral Care of Homosexual Persons.”

On the Vatican’s Congregation for the Doctrine of Faith website, directed by then-Cardinal Ratzinger, he wrote: “Those who would move from tolerance to the legitimization of specific rights for cohabiting homosexual persons need to be reminded that the approval or legalization of evil is something far different from the toleration of evil.”

The problem with Benedict’s calling us evil not only diminishes the human life of LGBTQ+ people but also denies the suffering it causes.

Benedict suppressed the growth of liberation theologies in Third World countries, the emerging face of the Catholic Church, for their supposedly Marxist leanings that exposed classism. However, liberation theologies combine Christian theology with political activism on human rights and social justice issues. Liberation theologies emphasize the biblical themes that God’s actions on behalf of the enslaved, the poor, the outcasts like women, people of color, and LGBTQ+ people, to name a few, are a central paradigm for a faith that embraces the world — as it is today — from an engaged and committed stance that does justice.

“The passing of former Pope Benedict XVI marks what is, hopefully, the end of a long, painful era for LGBTQIA+ Catholics, our families, and the entire church,” Duddy-Burke added.

Benedict asked for forgiveness and apologized for his complicity in the church sex scandal. He dedicated his final years to prayer. Perhaps that was his act of penance.

James Corden, Tom Ford & George Clooney were all previously attached to “The Whale”