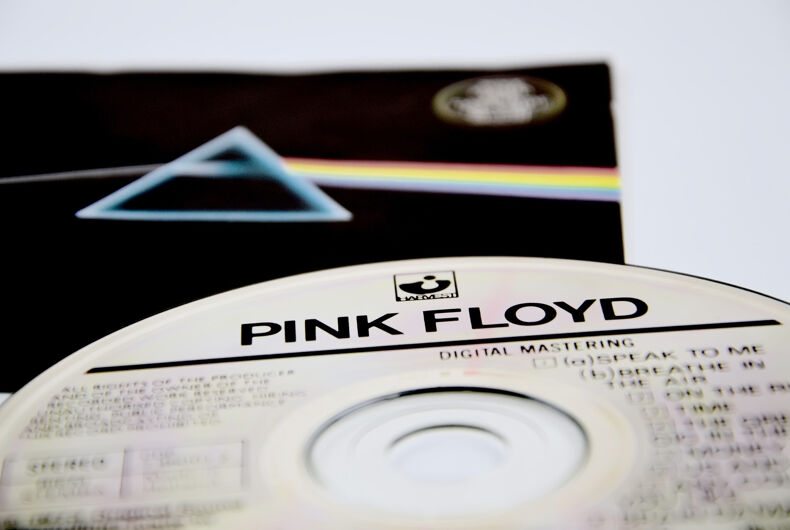 Anti-LGBTQ+ trolls have been losing their minds after Pink Floyd revealed a new rainbow logo to celebrate the 50th anniversary of their iconic album, “Dark Side of the Moon.” The rainbow, however, had nothing to do with LGBTQ+ people and instead was a nod to the album’s original cover art, designed before the rainbow flag even became a symbol for queer equality.

But that didn’t stop the outrage, which also led to a slew of liberal fans coming for the critics and dragging them for being “fake fans” who don’t understand what Pink Floyd is all about and who don’t realize the new logo is a reference to the original album cover.

“Imagine being a Pink Floyd fan and not realizing the band has always been progressive,” one user wrote, alongside a photo of a massive trans rights display at a concert by former band member Roger Waters who now has a solo career.

“Imagine if they knew any sort of political ideologies were present in the music,” wrote another fan.

Fans criticized the trolls for having “small minds” and sounding “comfortably dumb.”

“Brain Damage is the PERFECT song for some people on this thread,” said one Facebook commenter, referring to one of the songs on the album.

“I just had gay sex and it is all because of Pink Floyd,” someone else declared.

The discourse got so heated that many liberal fans started commenting fake rants against the rainbow, which has since confused many into not knowing which are real and which are sarcastic.

Fans have been having a blast mocking the haters and burying their comments.

“CAN YOU ALL STOP MAKING FUN OF THE BOOMERS?!?” one person wrote. “I came here to read their ignorant comments but I can’t find them under all the ones that are making fun of them!”

The furor from the right over the 50th anniversary post by Pink Floyd as “going woke with rainbows” is peak MAGA ignorance. It’s a prism of their own making, as it were. pic.twitter.com/MJp2B8cxx9

The kind of people who tell you that boycotts against someone like Rowling don't work are currently trying to cancel Pink Floyd for continuing to use the rainbow from their 1973 album Dark Side Of The Moon pic.twitter.com/4tdnChvv7t

Boomers who LITERALLY LIVED THEIR YOUTH in the 70s complaining about Pink Floyd using a rainbow to celebrate the 50th of a 1970s album when visual design from that era was FILLED TO THE BRIM with rainbow patterns is the most ironic thing ever! pic.twitter.com/fBDQKE4QD0

If you are complaining because Pink Floyd is using a rainbow to celebrate Dark Side of the Moon, you were never an actual fan, and now everyone knows you're an idiot too. #PinkFloyd pic.twitter.com/CMhyYXwJK6