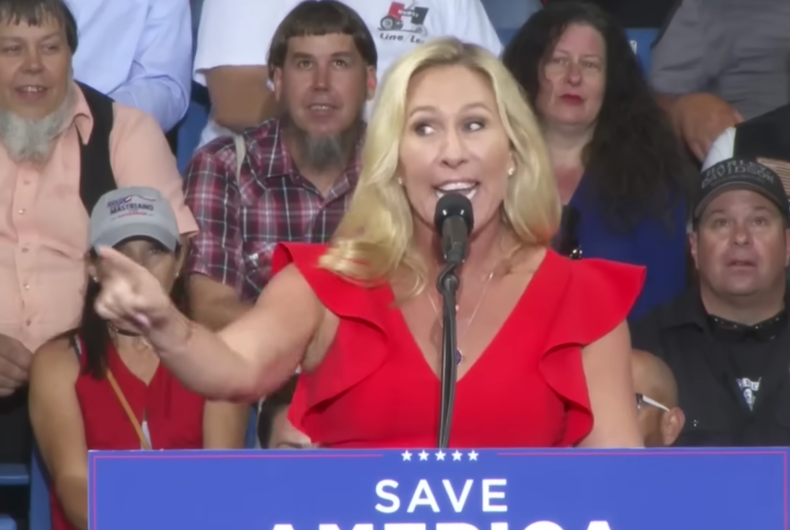 Anti-LGBTQ+ Rep. Marjorie Taylor Greene (R-GA) recently shared a post from a right-wing journalist criticizing Dr. Anthony Fauci’s work during the height of the AIDS epidemic, as well as his work against COVID-19.

“Did you know gay liberal activists stormed the NIH [National Institutes of Health] in 1990?” the post stated. “They blamed Dr. Anthony Fauci for blocking cheap and effective AIDS treatments and for only promoting expensive and toxic drugs that benefited Big Pharma. Fauci did the exact same thing during Covid-19.”

The post was accompanied by a video of angry ACT UP protestors yelling “Storm the NIH,” carrying anti-Fauci signs, and blaming the NIH for refusing to use its resources to find a cure and treatment for HIV/AIDS as well as having a conflict of interest with the pharmaceutical companies.

Greene has used her influence to sow doubts about COVID-19 vaccines. She also says she remains unvaccinated herself.

She has also compared vaccination volunteers with the Nazi secret police and “joked” that people could threaten them with guns.

In fact, Greene has compared COVID-19 mask and vaccination mandates to Nazis during the Holocaust so often that the National Holocaust Museum in Washington, D.C. had to issue a letter telling politicians like her to stop making disrespectful and inaccurate comparisons.

In 2021, she was also caught on video telling her fanatical supporters to shoot vaccine workers. She also accused Dr. Anthony Fauci of sending money to “the Wuhan lab” to create the COVID-19 virus.

“He funded COVID-19!” she told the crowd at an event. “That is his baby. That is his experiment. And he’s getting to watch it in the real world like a live television show. He has the front-row seat.”

Needless to say, there is no evidence to support the idea that Fauci helped create the COVID-19 virus in order to watch over four million people die worldwide.

With her most recent tweet, Greene appeared to believe she caught Fauci red-handed for what was already public knowledge, and many blasted her recent tweet, saying that Fauci was working within the limitations of a Republican-led government that refused to acknowledge the AIDS crisis or devote resources to it. People called out Greene’s hypocrisy for criticizing his COVID-19 response while actively campaigning against efforts to curb the disease.

The anti-LGBT Sasquatch forgets that Reagan was running things and wouldn't even acknowledge the AIDS crisis, except to mock it, for year's, sort of like how the GOP has treated COVID and vaccines. Fauci faced the same type of Republican pushback then as he does now.

Republicans are simultaneously insisting that Covid is a nothing-burger and also that Biden is doing too little and too much about it. And also that Trump’s response was perfect but that fauci was a disaster and the vaccines are amazing but don’t take them because they don’t work

In 1990 (my 1st yr. of med school), I watched protestors demand expedited access to emerging antivirals. In contrast to what you think, protestors WANTED the therapy. In response, Dr. Fauci encouraged research and legislators responded by increased funding. This was the result: pic.twitter.com/I9Mr7nEm2I

find that as the misinformation began to subside, and the LGBTQ community entered into a dialogue with Anthony Fauci, they became Allies in the fight. Not only that, but Fauci changed the way Government handled Clinical Trials, and his program, PEPFAR, was credited 2/

The things you don’t know are endless.

Oh, so now you support the gay community as long as it fits your agenda?

Dr. Anthony Fauci has served as the director of the National Institute of Allergy and Infectious Diseases (NIAID) since 1984 and has been at the helm of America’s medical response efforts since the height of the HIV/AIDS epidemic.

While he did endure an onslaught of criticism when the epidemic began, he also worked directly with members of the LGBTQ+ community to hear their concerns and work toward effective treatments together.

His program, PEPFAR, which was established in 2003, has invested over $100 billion in the global fight against HIV/AIDS and has “effectively sav[ed] 25 million lives, preventing millions of new HIV infections, and serving as a platform that has helped to combat avian flu, Ebola, and – more recently – COVID-19,” according to Project Hope.

Fauci also received the Presidential Medal of Freedom from President George W. Bush for his role in fighting the HIV/AIDS epidemic.

Despite being a member of Congress during a pandemic, Greene did not know any of this history, especially considering Fauci himself has recently addressed it.

Since he has skyrocketed back into the public eye with the COVID-19 pandemic, Fauci has spoken openly about his work with HIV/AIDS as well as the protests against him.

In a 2021 sit-down with NPR‘s Terry Gross for the Fresh Air podcast, Dr. Fauci talked in-depth about his handling of both HIV and COVID-19 during his tenure from the 1980s to today. In the 1980s, he said he visited gay bathhouses and clubs so he could see them with his own eyes to become a better immunologist.

Gross asked Dr. Fauci if the president at the time, Republican Ronald Reagan, made his job harder.

“Reagan was supported by the religious right that had a very anti-gay agenda,” Gross noted, “and that was kind of very central to their political agenda. Do you think that that interfered with the kind of funding you needed for research into AIDS?”

“You know, I think it did to some extent,” Dr. Fauci answered.

Fauci also compared the people protesting his work on COVID-19 to his work on the HIV/AIDS epidemic, saying that AIDS protestors were “on the right of history” and were “not threatening” in the same way that he has felt threatened by those protesting against the COVID-19 vaccines.

Dr. Fauci expressed that he learned two major things from dealing with the AIDS epidemic: “One of them is the importance of getting the community involved and dealing with the community and their special needs…if you look at the incidence of infection and the incidence of serious disease, including hospitalization and deaths, brown and Black people suffer disproportionately more than whites.”

“We also learned the importance of fundamental basic science in getting solutions,” he explained. “Back in the early days, getting infected with HIV was a virtual death sentence for the overwhelming majority… it was the fundamental basic science of targeted drug development that allowed us to develop combinations of drugs… that ultimately completely transformed the lives of people living with HIV.”