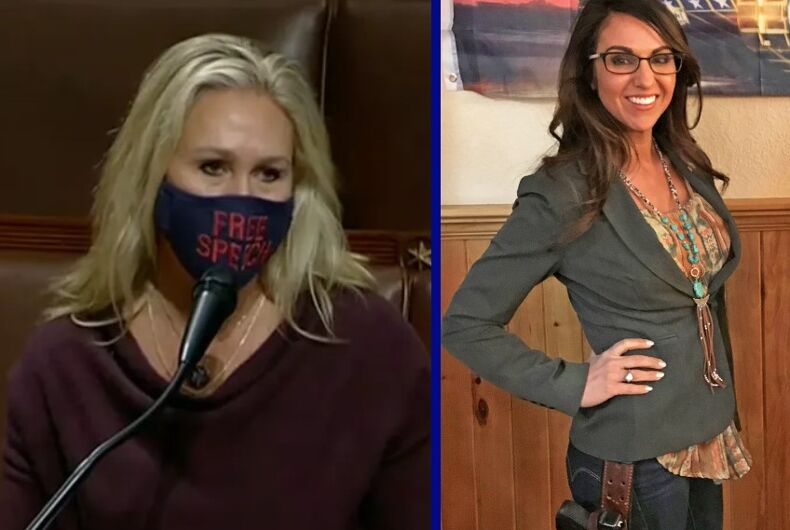 Reps. Marjorie Taylor Greene (R-GA) and Lauren Boebert (R-CO) allegedly got into a screaming match in a women’s room at the Capitol earlier this month.

Both Greene and Boebert have said that trans women are a threat to cis women in public restrooms and locker rooms, but it appears that the real aggression in the women’s room is coming from them. The two far-right anti-LGBTQ+ extremists reportedly got into a shouting fight on January 3, just as Congress was getting ready to vote for speaker of the House, according to several unnamed sources who spoke to The Daily Beast.

During the 15 votes that lasted for that whole week, Boebert and a small group of far-right Congressmembers that included Reps. Matt Gaetz (R-FL), Bob Good (R-VA), and Paul Gosar (R-AZ) voted against Rep. Kevin McCarthy’s (R-CA) bid to be speaker. Greene, who is also a member of the far-right Freedom Caucus and got into politics after spreading QAnon conspiracy theories online, sided with McCarthy and establishment Republicans and voted for him each round while trying to get her fellow fringe Republicans to vote for him.

According to one source, Greene was exiting a stall when she confronted Boebert about the latter’s plan to thwart McCarthy’s election as speaker. Greene allegedly accused Boebert of taking money from McCarthy for her campaign but not showing loyalty to him now.

“You were OK taking millions of dollars from McCarthy but you refuse to vote for him for speaker, Lauren?” she allegedly asked, according to one source.

“Greene questioned Boebert’s loyalty to McCarthy, and after a few words were exchanged, Boebert stormed out,” another source said.

“That’s when Lauren said, ‘Don’t be ugly,’” they said, before Boebert “ran out like a little schoolgirl.”

When questioned about the altercation, Boebert just said “See you later, bye.” Greene hasn’t commented on it either.

Rep. Debbie Dingell (R-MI) was reportedly in the restroom when this all happened, but she isn’t talking about it.

The two have reportedly been at odds for at least a year now. Last year they nearly came to blows at a meeting of the far-right Freedom Caucus over Greene’s public appearance with prominent white supremacist Nick Fuentes. The confrontation got heated and one witness later said that they thought Greene and Boebert were going to get physically violent until another Freedom Caucus member “stepped in to de-escalate.”

Besides differences when it comes to House leadership, the 2024 GOP primary is already pushing the two Congressmembers apart. While Greene has been openly supportive of Trump’s 2024 presidential campaign, Boebert hasn’t endorsed him and has even said that she does “love” Florida Gov. Ron DeSantis (R), who is widely presumed to be challenging Trump for the GOP nod in 2024.

Tensions came to a head earlier this month during the fight for the speakership, with Boebert mocking Greene to the press.

“I have been asked to explain MTG’s beliefs on Jewish space lasers, on why she showed up to a white supremacist conference…. I’m just not going to go there,” Boebert said. “She wants to say all these things and seem unhinged on Twitter, so be it.”