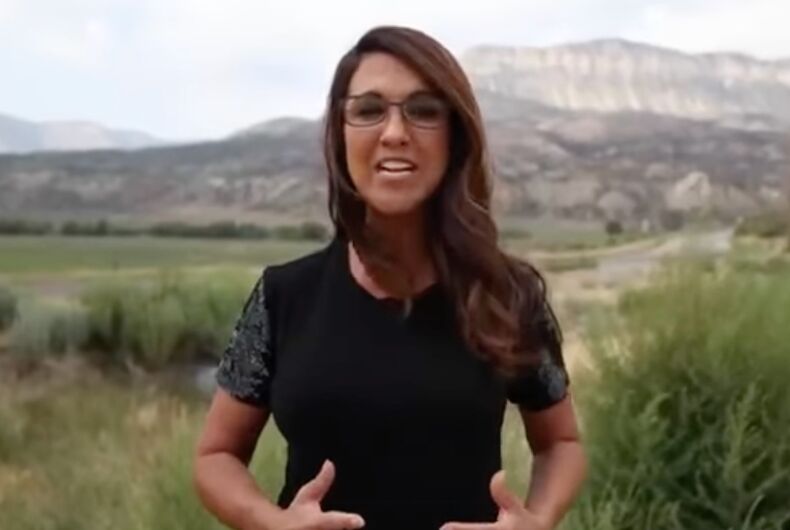 Twitter users are blasting Rep. Lauren Boebert (R-CO) after she defended Florida’s Don’t Say Gay law by harking back to the past.

“Growing up, I don’t recall teachers announcing their marital status & pronouns to everyone,” Boebert tweeted. “They’re there to educate. How is this still a complaint of the Left?”

Growing up, I don’t recall teachers announcing their marital status & pronouns to everyone.

They’re there to educate.

How is this still a complaint of the Left? https://t.co/s7nZeegZuh

Boebert has repeatedly spread anti-LGBTQ+ rhetoric and has been blamed for stoking violence against the community. This tweet was in response to a video of out White House Press Secretary Karine Jean-Pierre discussing the White House’s response to Florida Gov. Ron DeSantis’s (R) decision to block the teaching of AP African American Studies in the state.

Jean-Pierre called the decision “incomprehensible” and said, “these types of actions aren’t new…especially from Florida…Florida currently bans teachers from talking about who they are and who they love,” a reference to the state’s Don’t Say Gay law. The law prohibits K-3 teachers from discussing sexual orientation and gender identity with their students.

Twitter users came for Boebert from all angles, some explaining that teachers have always shared their pronouns and personal lives with students and others explaining some other things that are different about schools today.

Weird because I knew the pronouns of every single one of my teachers and for most of them I knew their marital status too.

They announced them on the first day of class by referring to themselves as Mr., Mrs., Ms., or Miss.

I was a guest at my third grade teachers wedding and she asked third grade me who was currently a student in her class to lead a toast. And I nailed it.

Growing up I don’t recall politicians being high school dropouts who give tours to white nationalists the day before a failed coup.

They’re there to legislate.

How is someone who won their seat by 500 votes so inappropriately confident (read 1st sentence above again).

I don’t recall active shooter drills in school when I was younger, Lauren, but my kids do.

Wait… you don’t know what “Mrs” means? Is this a joke?

You…. you never heard a teacher mention their spouse, significant other, or pronouns? Did you even pay attention in scho-ah. Never mind. Checks out.

Really? Are you certain you were there? Did you attend school in the USA? I always knew my teachers’ pronouns and marital status, all the way through school. Miss and Mrs was a dead giveaway. This is nonsense, You are a chaos agent.

What do teachers write on the board on the first day of school??

Or what if, in an attempt to establish a connection, the teacher mentions something funny that their partner did?

I want to be protected from persecution if I say “my husband” vs “wife.”

Who hasn’t had a caring teacher that spoke about their spouse or their kids?

I remember the opposite. Even learning our gym teacher was dating another teacher and the entire school celebrating their marriage.
Grow up.

Lauren Boebert attended elementary school at a hollow tree in a desolated part of the forest, and was taught by squirrels. The squirrels didn't use pronouns.