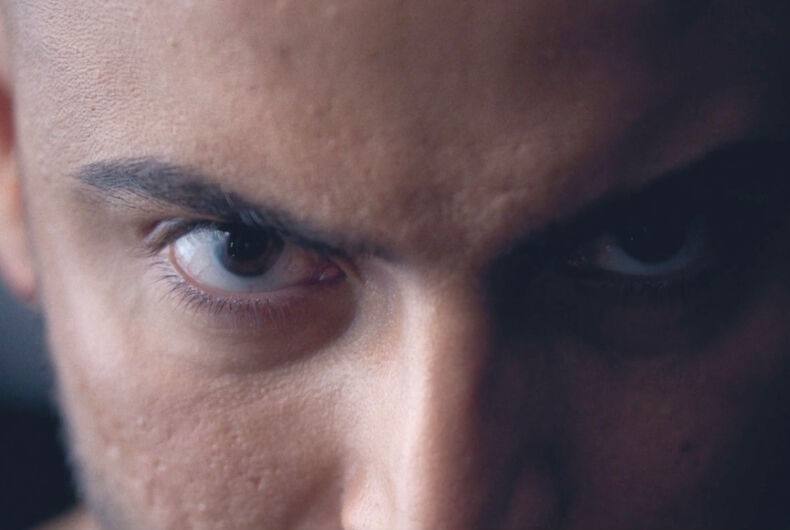 In his new film, Safeword, a multi-faceted jewel of a movie that, while just 15 minutes, filmmaker Mauricio Pita casts light on themes larger than its small stature would suggest; Pita also stars as a young man confronting his self-loathing in the form of a dom he hires on the regular.

The story grew out of producer Pita’s struggles with depression, with a spare script by collaborator Eva von Schweinitz and directed with simplicity by Christopher Cunetto.

Safeword is an elegant chamber piece, and the maid comes dressed in leather.

I spoke with Pita from his home in Washington, DC, on a clear, crisp, “glorious” day in the District, where Safeword was shot. Pita runs the production company that funded the movie with artistic partner Cunetto.

LGBTQ Nation: How did the story for Safeword come about?

Mauricio Pita: I’ve suffered from depression my whole life. And I’ve been going through therapy for the last three, four years after a really bad breakup, and started with that work and started to discover and learn how damaging and how brutal my self-talk and my inner voice are. And while I was doing the work of therapy and reintroducing this new voice — a more accepting, loving, caring voice — instead of me feeling, like, convinced by it, I got into conflict with it. And so I had these internal battles and internal sort of self-arguments about who I was and who I needed to be perceived as. I brought up all of this to Eva von Schweinitz, who I’ve known since I was living in New York, and I said, “I would love to get your help writing a screenplay,” and she came up with Safeword.

LGBTQ Nation: What does the character of Bear, the dom played by Jonathan Adriel, represent?

Pita: He is basically my inner voice. Eva created a character that externalized that inner conflict so I could face that internal voice and see what would happen. And so that is how the character Bear came about.

LGBTQ Nation: Have you been in a sub/dom relationship?

Pita: I have not. I have not personally been in a relationship like that. But I think that that’s what my next relationship should be (laughing) and will be! Because I think part of why we wanted to have this dom/sub relationship is because I fantasize about that. It’s like my main sort of kink. And it took me many, many years to sort of get to terms with it because I’ve been ashamed of it for so long. And because I grew up in South America with a very conservative upbringing, I struggled a lot with my sexuality. And now I’m sort of in this moment where I’m just like, not only accepting it but making a movie about it! So, like, put it out there (laughing). And that’s been really cool. Because now I feel very much empowered and owning it in a way that — I just feel like I’m reaching a sort of authentic joy and happiness that I’ve been searching for my whole life. And I think it has to do with accepting yourself in that way and the darkest things about yourself.

LGBTQ Nation: What do you think the benefits of that kind of relationship would be?

Pita: To be honest with you, rules. Boundaries. Communication. Clarity. Like all of these things make a dom/sub relationship attractive to me, right? I always thought that the sub had no power, but in Safeword, I can take all the power just by saying the safe word. 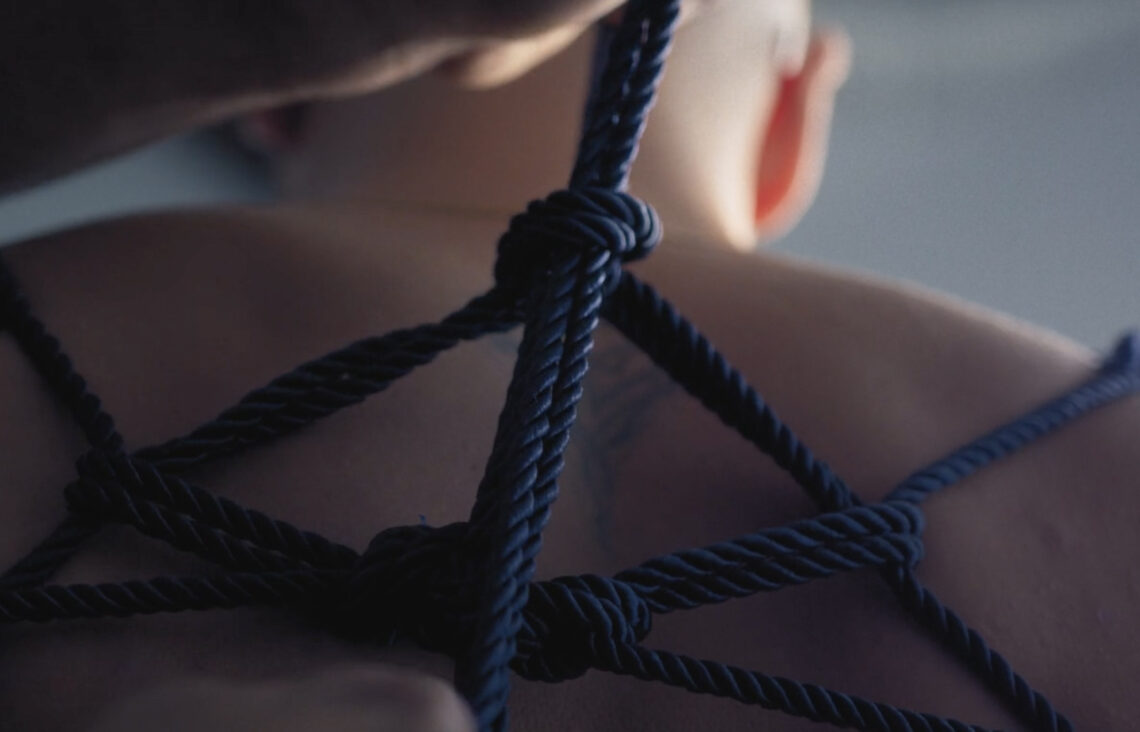 LGBTQ Nation: How is that different from traditional relationships?

Pita: From my experience, I’ve had issues with communication in terms of, like, there’s a lot of mind reading, a lot of speculation or assumptions that we make about each other — in my relationships, at least — and I think in a dom/sub relationship, there’s a lot of clarity on the rules. And there’s like a safety underneath it all. That’s what’s attracted me. And it’s also hot! Like, come on. It’s really hot. Like, let’s just be honest.

LGBTQ Nation: There’s a lack of ambiguity, I guess.

Pita: Yeah, completely. That’s what I mean by clarity. There’s no ambiguity. You know what you’re getting and you know the roles, the rules. The boundaries that are set are predetermined. Like, that’s great! More people should have that.

LGBTQ Nation: For the sub/dom-curious, how would one go about finding that kind of arrangement?

Pita: I would say, you know — and the way that I’m approaching it is — it’s a huge and welcoming community. And there are tons of events. I mean, like, I’m going to MAL, Mid-Atlantic Leather, next week. It’s my first time going. I’m nervous. I’m excited! And then, also, you know, I think owning it, owning it, and putting yourself out there in that way. Somebody’s going to come and find the thing you like and want to feel when it fits that role. So it’s whether or not you’re ready to accept it.

LGBTQ Nation: As you say, the movie is a universal story.

Pita: I think so.

LGBTQ Nation: But I think it’s interesting that you’re in Washington DC, and Washington is all about power. And probably home to many people who suffer from the same kind of self-loathing your character does and have the same types of insecurities that we see in the film. Do you see that dynamic at play?

Pita: Absolutely. And I think that gave me the courage to show who I am because this is a town where people are always playing roles. Like people are always playing a character and the people that you see here in DC during the day — I actually live relatively close to the Mall, and I see a lot of people who work in Congress, staff members who — you see them during the day, and they are playing the role of a staffer and then you see them at night and you see really who they are. I just wish that we would be less, less insecure, and I think that the only way to do that is to have enough people who have the courage to show who they are and to demonstrate that it’s okay, that you’re not going to die, that you’re not going to get fired when — but in their case, they could be fired, right? I’m curious to see who will attend the Mid-Atlantic Leather weekend and see if I recognize anybody. Did you read about Matt Schlapp?

Pita: I mean, it’s a town with a lot of shame. DC is very, very liberal, and it’s very gay. But — and I don’t want to criticize DC here — but as an outsider coming in, the DC community felt homogenous. I think it’s changing. But, like, if you go to other places like New York or San Francisco, for example, you see a really wide range of queerness. And they’re intermixed. I think what’s happening in DC is that there’s a level of isolation, it’s like they stick to their groups. And it just doesn’t feel as interconnected as in other cities.

LGBTQ Nation: Well, I’ve been out in DC, and it’s a reflection of what you’d find in Congress because most of those folks, you know, a good number of them are white. I agree it’s changing, at least in Congress on the Democrats’ side.

Pita: That’s been my personal experience. I’m sure other people have different experiences, but that’s mine. 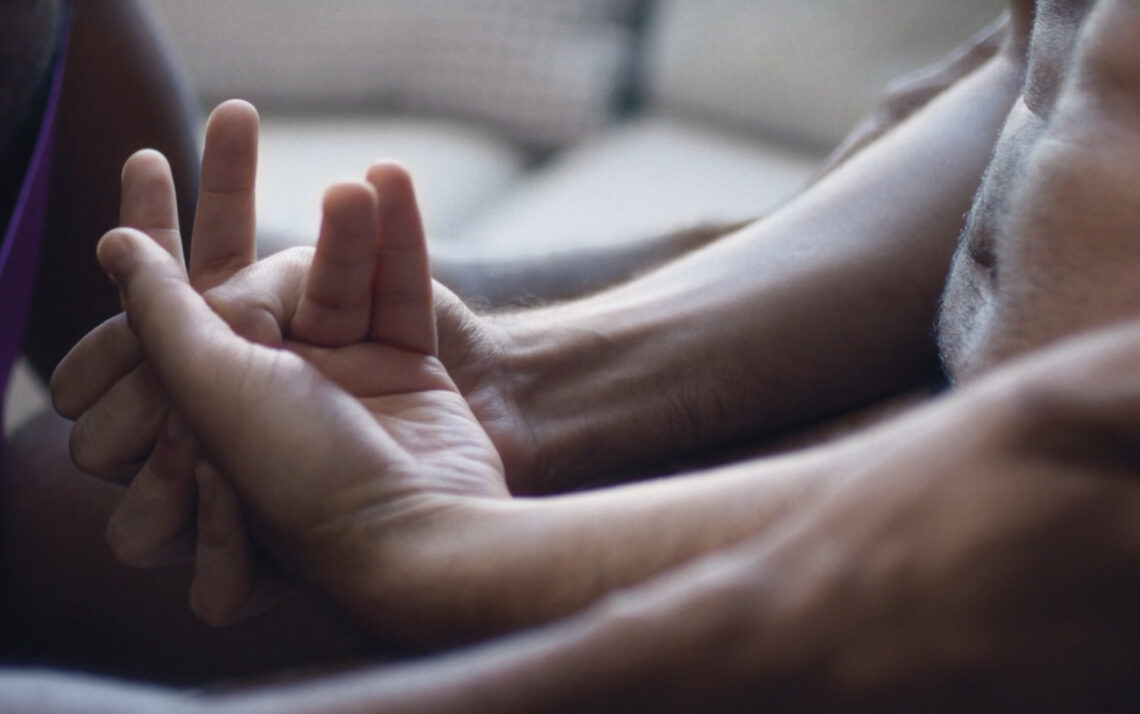 LGBTQ Nation: In the movie, your inner voice takes the form of Bear. So, what will you be if you enter into a sub/dom relationship? Sub or dom?

Pita: I’m very much Cesar in the movie and real life. I am very much a sub. But here’s the thing with that. Some assumptions are made about being a sub, and I just want to reiterate that in the film, the sub has the power. And for a long time, one of the reasons why I was kind of ashamed of my love for kink was that I didn’t want to be perceived as a powerless person. And I think for me exploring and investigating those kinds of relationships with the film has made me realize that I am actually very much in control. I’m empowered by being a sub now rather than ashamed of it.

Pita: Our goal is to help emerging artists with stories that are not traditionally told. Tepui (pronounced teh-PUI) describes these tall mountains in Venezuela with a flat top where the life there is unique to that specific mountain. So another Tepui miles away might have a different ecosystem somehow. My goal is to elevate these artists, see what it is that they want to achieve, and then provide them with an ecosystem, whether it’s financial support through fundraising, through our company, of course, or whether it is artistic support and other ways, like finding composers or another discipline or artistic medium that could help enhance their art. That’s our goal.

A post shared by Safe Word – A Short Film (@safewordfilm)