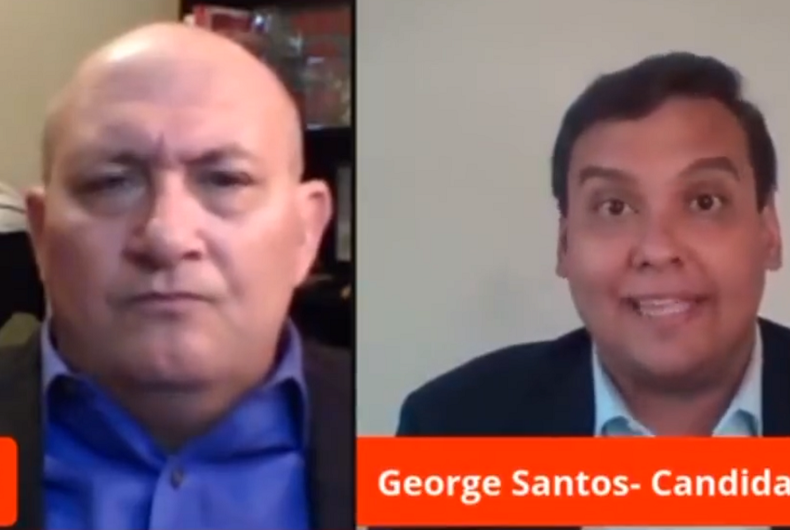 Out Rep. George Santos (R-NY) is the first out LGBTQ+ Republican elected to the U.S. House, but that doesn’t mean he has much respect for other LGBTQ+ people.

A recently uncovered interview from his previous, failed campaign to represent New York’s Third Congressional District shows him ranting for two minutes about how the lack of heterosexual parents is destroying “the family unit,” parroting debunked talking points that conservatives have been using for decades to attack same-sex couples who adopt and raise children.

Santos went so far as to say that children need both a father and a mother or else they will grow up to be “troubled individuals,” one of the main reasons conservatives have used to attack same-sex couples’ rights to get married, adopt, and even raise their own children. He also said that kids shouldn’t hear about LGBTQ+ or single-parent families in schools because that teaches them their families are “OK.”

“The family unit has been under attack for decades, decades!” Santos said on John Stubbins’s conservative Indivisible show on September 4, 2020. “In different ways, right? The flavor of the decade is same-sex couples. ‘Oh, that’s so OK!’ Look, to each their own, I don’t have anything against that but they’re teaching in school how kids that, you know, you don’t need a mommy and a daddy, you can have two mommies, you can have two daddies. I think that’s a little much for kids, right?”

“That’s an attack on the family unit in the sense where they’re just making excuses and reasoning to explain to kids why there’s only one mommy or why there’s only daddy and no other person, that it’s OK to be like that, that that’s your unique family.”

“I want to go back in time and think, why would it be bad for minorities in general – and that includes me, right? – but why would it be bad for us to have a mom, a dad in the same household with your little brothers and sisters?” he continued, as if anyone on the left is trying to ban heterosexual people from forming families. “But then I keep thinking, because that creates stability, and stability raises good individuals who are independent thinkers.”

“The scales are tipped and there’s nobody left there and you have just one-side, you start creating troubled individuals. Troubled individuals are easier to manipulate and [inaudible] and they buy pretty much anything,” he said to Stubbins, who was visibly buying what Santos was saying.

In 2020, George Santos called "same-sex couples" an "attack" on "the family," and said schools “make excuses” by teaching kids "it's ok” to have single or gay parents.

Santos: "They're teaching …you can have 2 mommies have 2 daddies. I think that's a little much for kids.” pic.twitter.com/CSsjlw3lOT

Santos’s point of view is not supported by evidence. Studies on children raised by same-sex couples have found that they do just as well and sometimes even better on certain measures, like academic performance.

Santos made it a point to attack the Respect for Marriage Act last year even though he wasn’t in Congress. The law protects the right of same-sex couples to have their marriages recognized by the government should the Supreme Court overturn marriage equality.

“Sorry to tell you that not all gays think alike,” Santos wrote on Twitter in December 2022 in response to a tweet from Rep. Ted Lieu (D-CA) about the Respect for Marriage Act. “I challenge your antiquated thought process & reject your disdain for my beliefs.”

Sorry to tell you that not all gays think alike. I challenge your antiquated thought process & reject your disdain for my beliefs.

You should be ashamed. But I know you won’t be. https://t.co/1ppGkANXJZ

Santos has been accused of stealing $3000 from a Navy veteran’s GoFundMe to crowdfund his dog Sapphire’s surgery. Santos allegedly helped the veteran set up the GoFundMe and then refused to use the money for the surgery. The dog was put to sleep two months later, and the veteran had to panhandle to pay for the euthanasia and cremation of Sapphire.

“It was one of the most degrading things I ever had to do,” the veteran said.