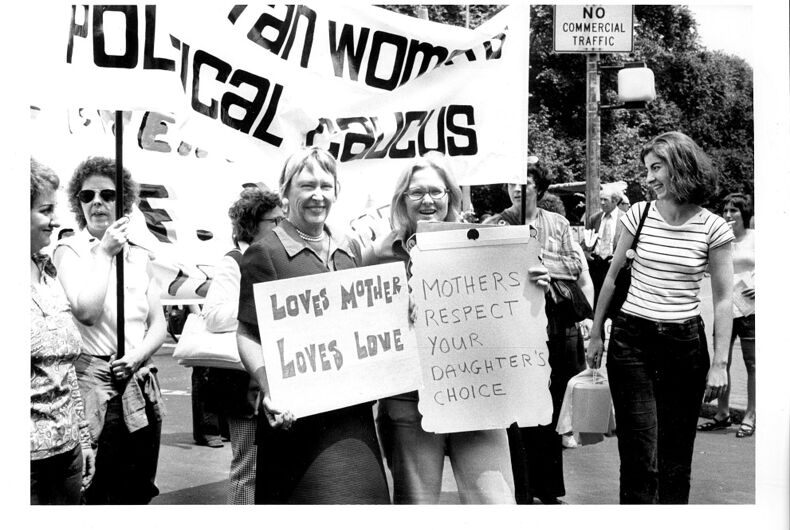 Love and her mom at the 1973 Christopher Street MarchPhoto: Bettye Lane/Manuscripts and Archives Division, The New York Public Library

Barbara Joan Love, a seminal figure of the women’s, lesbian, and gay rights movements, died after complications from long-term leukemia and Parkinson’s on November 13, 2022.

Fearless, daring and a prominent lesbian activist in the 1960s and 70s, Love risked losing jobs and family relationships as she refused to hide her identity. After much repression and guilt, she recognized who she was and that others were like her. A lifelong lesbian activist was born.

She was proud of her work as a leader of the board of the National Gay Task Force for about ten years. She received a commendation for “working tirelessly to educate the public about lesbian and gay concerns.” And she testified three times to the New York City Council in the 1970s, through which she contributed to changes in discriminatory practices against gays.

At 31, she told her mother, Lois, that she was gay, recalling later that Lois responded, “First to thine own self be true.”

She joined Love two years later in the 1970 Gay Pride march in New York as one of the four parents present. The pair were members of the group Parents of Gays, which later became PFLAG.

She also was one of the founders of Identity House, a free walk-in peer counseling center in New York City for gays and their families, which in 2022 is celebrating its 50th year of operation.

She was exuberant about the 2015 U.S. Supreme Court ruling recognizing same-sex marriage as a legal right. In 2018, she married her longtime partner of 26 years, Donna Smith, an award-winning psychotherapist recognized for her work with gay youth. Her friend and former New York Mayor, David Dinkins, officiated. 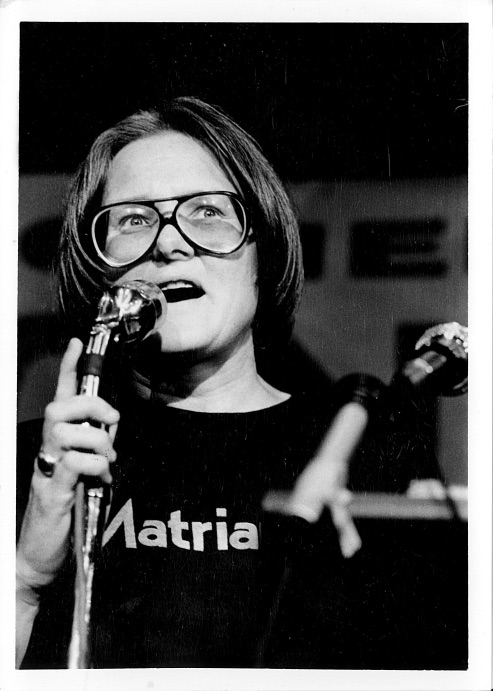 Adult Life as a “Feminist Troublemaker”

Love joined NOW in 1967. Her invitation to the local chapter meeting included a request to bring a chicken dish. With characteristic humor, she remarked years later, “I couldn’t believe I’d joined the women’s movement to cook!” She became a vocal and active member. She led a group that exposed discrimination and harassment of women on the assembly line at Colgate-Palmolive, using street theater at its corporate headquarters.

Love was an out writer/editor at a publishing company and became a changemaker within her industry. With NOW, she organized and participated in demonstrations with Kate Millett and others, such as one at the New York Times, which eventually changed the discriminatory practice of gender-segregated help-wanted ads that blocked opportunity and equitable pay for equal work.

She and other feminists saw the need to build on the accomplishments of first-wave feminists of the 1920s to win voting and property rights for women. In this “second wave” of feminism, they fought for sexual and reproductive rights, as well as equal opportunity in education and the workplace. Love’s sharp intellect, persistence, and humility won respect, while her powerful communication skills helped the movement succeed.

She proudly called herself a “feminist troublemaker.” Love was part of the group that tried at the 1972 Democratic National Convention to get gay rights on the party’s plank – unsuccessfully. Undeterred, in 1973, she joined the Board of Directors of the National Gay Task Force to secure gay rights nationally and served on the board for nine years.

In 1977, the Carter Administration appointed her as a New York delegate to the National Women’s Conference in Houston. This contentious forum eventually passed a lesbian rights plank calling for the end of discrimination based on sexual and affectional preference.

She was a Connecticut resident when AIDS began its death toll among the gay community. In 1982 she co-founded The AIDS Project of Greater Danbury with Dr. Donald T. Evans and others to advocate for and provide services to people living with HIV/AIDS. “I was very loud in all the right places,” she noted.

From 1998 through 2006, Love worked with activists, scholars, and authors to capture the lives of the pioneers of Second Wave Feminism in Feminists Who Changed America, 1963-1975.

This work featured less-known front-line changemakers to show why the second-wave women’s movement succeeded so quickly and persuasively. “More than any other social revolution in history, ours grew from the struggles of thousands of individuals to erase thousands of separate forms of discrimination in every sector of society,” she wrote.

She wrote of the women in the book, “These women suffered. They were brave. They were brilliant.” Gloria Steinem wrote, “No home, library or school is complete without this guide to the women who looked at the world as if everybody mattered, and so began a revolution.”

Love co-founded Veteran Feminists of America (VFA) when the group was founded three decades ago. She was a longtime board member of the group, promoting its mission to document, preserve and share the achievements of those who pioneered the modern women’s movement. Dr. Eleanor Pam, President of the VFA, said, “Love’s impact and influence on behalf of gender justice will continue to influence and inspire future generations.”

Changing the World with Words

The author of four books, Love co-authored Sappho Was a Right-on Woman: A Liberated View of Lesbianism, with her then-partner Sidney Abbott, considered the earliest nonfiction book that explores the transition from guilt to pride in being a lesbian. The New York Times review of the book called it “A resounding lesbian and feminist document of vital interest to all females, in and out of the feminist movement.”

She was the organizing force and editor for Feminists Who Changed America, 1963-1975, a monumental compilation of 2,300 autobiographies focusing on front-line men and women, including well-known and grassroots organizers, who took dramatic actions to change society. Before this, in 1970, she published Foremost Women in Communications to highlight women in a profession dominated at the highest ranks by men.

In 2021, she published her memoir, There at The Dawning: Memories of a Lesbian Feminist, sharing her firsthand experiences of being present at the birth of the modern women’s movement known as Second Wave Feminism. She fought vigorously, in what was a struggle in 1971, to force the National Organization for Women (NOW), the leading feminist organization of the time, to recognize lesbianism as a feminist issue. She co-founded Identity House, a peer counseling group for lesbians and gays.

In words and action, she saw the shared paths of feminism and gay and lesbian rights, saying, “We have to achieve Gay Liberation before women’s liberation can be successful.” Gloria Steinem reflected upon her life by saying, ”From the earliest days of this wave of feminism, Barbara Love brought women together across the many adjectives meant to divide us.”

Born into an affluent and conservative Ridgewood, New Jersey family in 1937, Love became a talented swimmer at an early age. She competed locally at the age of three and was featured in a New York Times article for her determined approach at 13. She was part of a girls’ relay team that won a 1956 Amateur Athletic Union championship that held the world record for decades. Her determination, as well as her focus on teams and winning, were foundational to her approach to social change.

She studied journalism and graduated from Syracuse University with a B.A. in 1959. She received her MA in Psychology from the New School for Social Research in 1975.

A memorial service will be planned for the future. Donations to honor Barbara Love may be made to Identity House at IdentityHouse.org and Parents and Friends of Lesbians and Gays at PFLAGnyc.org.

Editor’s Note: An earlier version of this article incorrectly named Love as a co-founder of Parents of Gays, which became PFLAG. Love was a member but not a founder, and this has been changed.