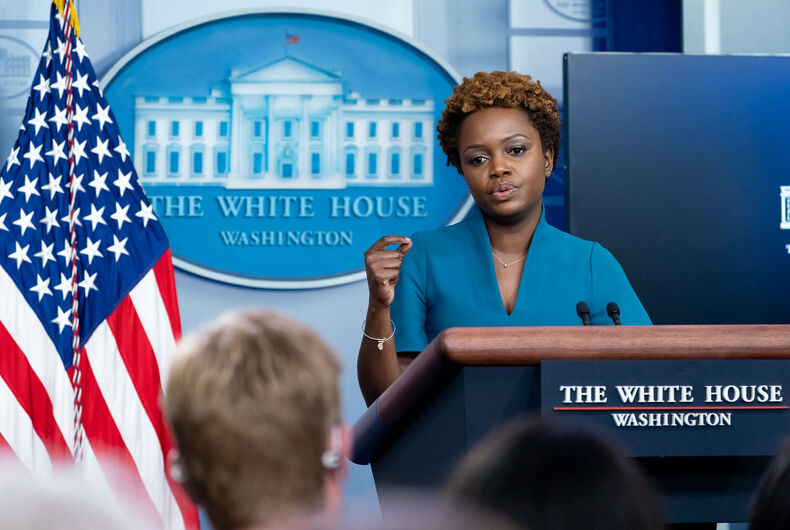 Out White House Press Secretary Karine Jean-Pierre shut down a Fox reporter who was trying to minimize the Biden administration’s successful deal to get Brittney Griner out of Russian custody.

A Biden administration official announced yesterday that Griner would be returned to the U.S. after she had been sentenced to nine years in a labor camp in Mordovia after she was caught with two cannabis vape cartridges at Moscow’s Sheremetyevo airport. The U.S. gave up arms dealer Viktor Bout in exchange. Bout had already served 11 years of a 25-year sentence in the U.S.

The Biden administration had tried to get both Griner and corporate security director Paul Whelan out of Russian custody in exchange for Bout but Russia was only willing to give up Griner. Whelan is currently serving a 16-year sentence in Russia for allegedly spying.

“Russians were not willing to negotiate in good faith for the release of Paul Whelan at this time,” Jean-Pierre said at yesterday’s White House press briefing.

The situation apparently angered Fox News’s Peter Doocy, who pressed the administration on why it didn’t get Whelan instead of Griner.

“In this prisoner swap, why did Russia get such a better deal?” Doocy asked after Jean-Pierre had already discussed the deal at length at the press briefing.

“Look, you know, I’ve talked about this, and I’ll say this again,” she said. “Here were our choices. Our choices was: Brittney or no one at all. Bring home one American or no American at all.”

“They give up a professional athlete,” Doocy sneered. “We gave up a prolific arms dealer who was convicted of trying to kill Americans, who is called the ‘Merchant of Death.'”

“The professional athlete is also an American citizen,” Jean-Pierre shot back.

“And Paul Whelan is an American citizen,” Doocy said, even though Jean-Pierre had spoken at length about how the administration is trying to bring Whelan back to the U.S.

“I’ve explained how the Russians have illegally treated — totally illegitimately treated his situation. I’ve been very clear on that,” she said. “The president felt that this was an opportunity to bring Brittney home.”

Before taking questions, Jean-Pierre had talked about the prisoner exchange that brought Griner home.

“On a personal note, Brittney is more than an athlete, more than an Olympian,” Jean-Pierre said. “She is an important role model and inspiration to millions of Americans, particularly the LGBTQI+ Americans and women of color. She should never have been detained by Russia. And we are — I am — deeply proud of the work that the president has done, this administration has done to get her home.”

Whelan was arrested in Russia in 2018 during the Trump administration. Donald Trump did not get him out of Russia either.