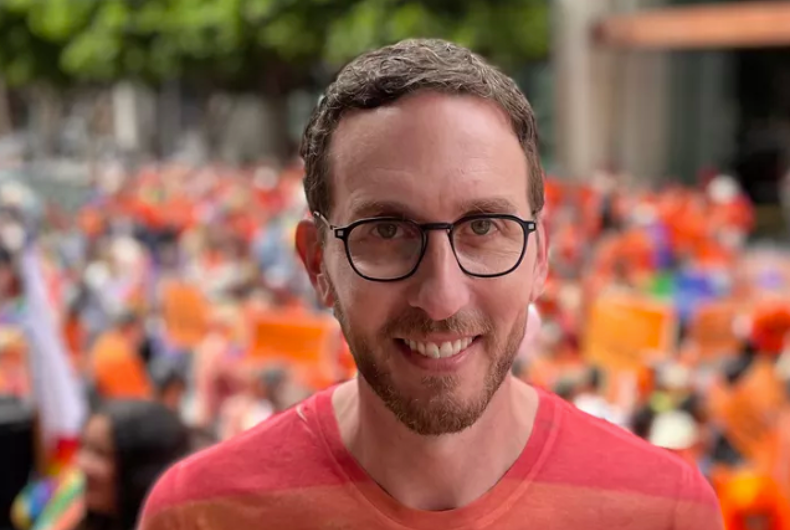 In the wake of the Club Q massacre in Colorado Springs, California state Sen. Scott Wiener (D) finds himself in the crosshairs of a coordinated attack by right-wing provocateurs Rep. Marjorie Taylor Greene (R-GA) and Charlie Kirk, who he says are directly responsible for threats against him.

On Wednesday, Wiener’s office received a voicemail warning, “People like you won’t be able to walk down the streets when light comes to the darkness that you’re fu**ing providing you piece of s**t.”

“You have to call it for what it is,” Wiener tells LGBTQ Nation. “And call out people like Marjorie Taylor Greene and Charlie Kirk for what they are, which is purveyors of hate and misinformation.”

It started with an explanation of “groomer.”

Following the shooting that killed five people on November 19, Wiener posted a series of tweets condemning the attack and the “violent rhetoric” that fueled it.

A subsequent tweet defined one element in that rhetoric: “The word ‘groomer’ is categorically an anti-LGBTQ hate word. It’s super homophobic/transphobic. It plays into the slander that LGBTQ people are pedophiles. It’s no different than calling someone a fa***t. If you call someone groomer, you’re inciting violence against LGBTQ people.”

A week later, Greene did just that, calling him a pedophile by another name: “communist groomer.”

“Pass my Protect Children’s Innocence Act to stop communist groomers like this from using state government power to take children away from their parents to allow a for-profit medical industry to chop off these confused children’s genitals before they are even old enough to vote,” Greene wrote, referring to Wiener.

Greene’s run-on referenced Wiener’s role in passing legislation in California providing asylum to parents with trans kids. The bill granted relief from states like Texas trying to prosecute them for assisting with their children’s gender-affirming care.

Charlie Kirk, the head of right-wing advocacy group Turning Point USA, piled on Tuesday when he posted a thread condemning Wiener for his role in passing that legislation, as well as other pro-LGBTQ bills in Sacramento. But he led with a charge that falsely tied Wiener to a story that itself is false.

Kirk tweeted to his 1.8 million followers: “Thousands of pedophiles in California are going free after just a few months in jail, thanks to the state’s radically reduced penalties for child molestation. One reason so many of these predators are going free so early is California lawmaker Scott Wiener.”

“That’s based on a Daily Mail story saying that California is releasing all these pedophiles from prison early, which is not true,” Wiener tells LGBTQ Nation. “And then he ties it to me, maybe because of the sex offender registry bill, which had nothing to do with how long people spend in prison.”

That legislation, passed in 2020, equalized discretion for judges in statutory rape cases. Before the revised law, in cases involving a defendant and a victim of similar ages – for example, if a 19-year-old and a 17-year-old had sex – judges could keep the defendant off the state’s sex offender registry. But the law only applied in cases of penetrative vaginal sex, which meant there was no discretion for same-sex sexual encounters. Wiener’s legislation brought equity to those cases. He was labeled a pedophile by right-wing groups at the time for his efforts.

Kirk went on, posting a photo of Wiener at the Folsom Street Fair: “That name and photo might ring a bell. Wiener is one of the most effective lawmakers in the entire country. He’s behind California’s new law that will protect parents who kidnap their children and take them to California to receive mutilating surgeries.”

“Wiener was also behind California’s law lowering penalties for intentionally spreading HIV to other people, and their law creating a third ‘nonbinary’ gender for government documents.

“If there’s some horrifying idea related to modern gender and sex ideology, Wiener has probably written and passed a bill about it in California.

“If elected Republicans cared as much about their voters’ concerns as Scott Wiener cares about freeing pedophiles and mutilating children, they’d have won total victory long ago.”

“What was so disgusting about his tweet — and his tweets were actually worse than Marjorie Taylor Greene’s,” says Wiener of Kirk, “was he completely made it up, defaming me, tagging me with something that didn’t happen, and that I certainly had nothing to do with, and then winding up in his last tweet saying that I was trying to release pedophiles and mutilate children.”

Wiener, a prolific and seasoned social media user, did not hold back online.

“Charlie Kirk — one of the biggest attention-seeking liars around — is spreading bald-faced lies about me. These statements are absolutely false & defamatory,” Wiener posted. “These are the lies bigots have always spread about LGBTQ people — lies that lead to violence against our community.”

Hours later, Wiener’s prediction was borne out with a message left on his Senate office voicemail, based on Kirk’s disinformation.

“It’s a shame you come out and you’re trying to release all these pedophiles,” a transcription of the message read in part.

“You’re sick individual. You’ll have something coming to you. People like you won’t be able to walk down the streets when light comes to the darkness that you’re f**king providing you piece of s**t.”

Wiener posted: “Not even 24 hours after MAGA grifter Charlie Kirk tweeted homophobic lies about me, I received this threat repeating one of his lies. But that was the point: Riling people up against me & other LGBTQ people. Words have consequences & Twitter is becoming a cesspool for this crap.”

“They’ve been calling me a pedophile for two and a half years now, based on the LGBTQ civil rights legislation and the various bills that I’ve carried,” says Wiener. “Then I saw around Club Q, they were using the word groomer, again, and that just pushed me over the edge. It made me so angry.”

“Sometimes,” he says, “you have to take this kind of homophobic misinformation head on.”