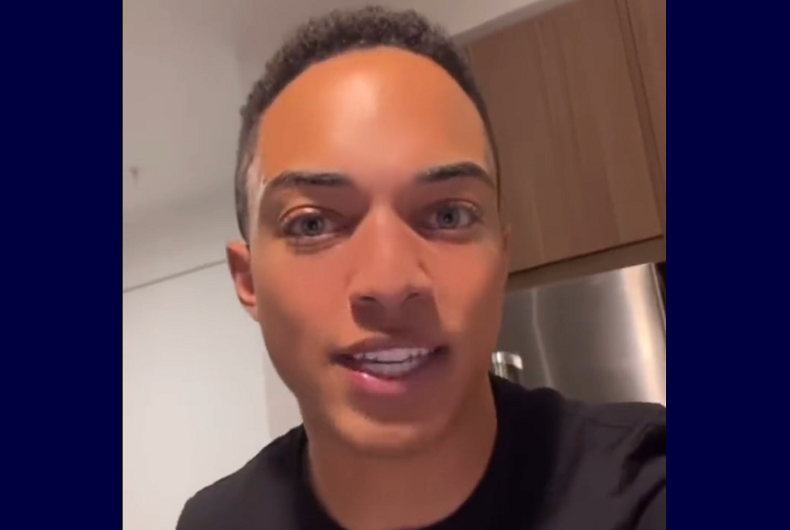 Christian Walker, the gay son of failed GOP Senate candidate and retired NFL player Herschel Walker, has called out a conservative pundit who he claims cheated on his wife at a conservative conference. And he’s laying out all the details.

Walker is a conservative TikTok influencer who has railed against LGBTQ+ Pride, Starbucks employees, and Democrats in the past, but his main target has been fathers who don’t raise their children. So it was no surprise that as more women came forward saying that they had sexual relationships with his father, that they had children his father wasn’t raising, and that his father either pressured them to get abortions or paid for them, Walker would increasingly turn on his father.

This past October, Walker said that his father threatened to kill his mother and that he and his mother were forced to move six times to escape Herschel Walker’s alleged abuse. Walker also called out Republicans who supported his father in the election, accusing them of supporting his father “mainly because he was the same skin color as his opponent with no background other than football.”

Among the Republicans attacking Walker after his father lost the election to Sen. Rev. Raphael Warnock (D-GA) is podcaster Elijah Schaffer, who said Walker “helped Democrats secure another seat in the Senate.”

Walker didn’t hold back in his response.

“Elijah wants to act like he’s some moral high and mighty, better-than-everyone man,” Walker said in a video shared on social media. “He was fired from his job for inappropriate behavior and not even a year ago at a conservative conference he did my friend four times in one night – unprotected – while he was married.”

“Go get your family life and your morality together, adulterer!” Walker continued. “You go study up on what morality actually is, because it ain’t cheatin’ on your wife.”

“I met your wife. She was really kind and it’s gross what you do to her behind her back when you go to conservative conferences without her. Don’t you ever speak on my family and my family business before you get your family life together.”

On Twitter, Walker specified that he was referring to a “turning point event in 2021,” probably referring to the anti-LGBTQ+ organization Turning Point USA.

I recommend you not come for me.

Or I’ll have to tell your wife how you had sex with my friend at the turning point event in 2021 while you were married to her. I don’t like cheaters. https://t.co/CXeKpY3cjt

Schaffer does not appear to have publicly commented on the accusations and they have not been independently confirmed.

Thanks for all the feedback

In April, he joked about killing transgender kids on a podcast.

Just this past week, he repeatedly called WNBA player Brittney Griner a man because she’s tall and set up a webpoll that said that gay people “eat da poo poo.”