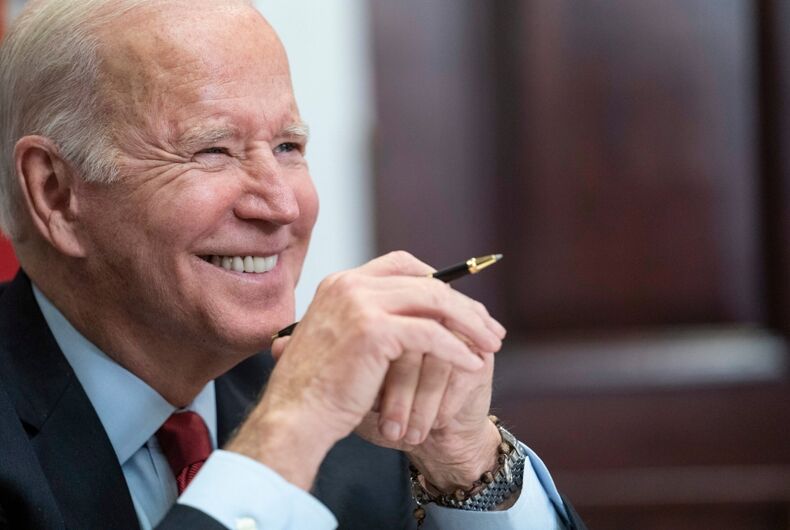 In 2022, President Biden upheld his reputation as the most pro-LGBTQ+ president in history. Biden and his administration have repeatedly taken steps to advance and support LGBTQ+ rights.

Here are a few moves he made this year.

In March, the Biden administration announced a slate of policy changes to promote transgender equality, including that the State Department would start issuing passports with “X” gender markers. Even more, medical documentation would not be required to use the gender marker.

In October, the Social Security Administration (SSA) announced it is now possible to self-select sex on Social Security records without providing legal or medical proof of a gender change.

A press release explained that a person’s self-designated gender does not have to match their legal documents, like passports or driver’s licenses, and those who would like to update their existing social security records can apply for a replacement card by showing some documentation of their identity.

The press release also said that the SSA cannot allow nonbinary sex designations but that “the agency is exploring possible future policy and systems updates” that would allow for an “X” designation when applying for a Social Security card.

Took a stand against conversion therapy

The order told the Department of Health and Human Services (HHS) to issue rules that ban the use of federal funds for programs that offer conversion therapy and to increase public awareness about the harms of conversion therapy.

Spoke out for trans rights again and again

As anti-LGBTQ+ Republicans continue to attack trans people, Biden has stood up for them.

In April, for example, just days after Florida’s governor signed the state’s “Don’t Say Gay” bill into law and several other states – including Arizona, Oklahoma, and Utah – passed anti-transgender laws, the Department of Justice issued a warning to states that said targeting trans people for discrimination could violate federal law.

And during a Now This Presidential Forum in October, Biden lambasted state lawmakers who want to ban gender-affirming health care.

“I don’t think any state or anybody should have the right to do that,” Biden responded. “As a moral question and as a legal question, I just think it’s wrong.”

The Biden administration has challenged anti-trans discrimination in court, sought to increase healthcare protections for the trans community, and made it easy for trans and non-binary veterans to identify as their gender on medical records.

And on the Transgender Day of Visibility, Biden issued a proclamation to trans people declaring, “I want you to know that your President sees you. The First Lady, the Vice President, the Second Gentleman, and my entire Administration see you for who you are — made in the image of God and deserving of dignity, respect, and support. On this day and every day, we recognize the resilience, strength, and joy of transgender, nonbinary, and gender nonconforming people.”

Expressed his support for marriage equality

Biden issued a statement celebrating after the Respect for Marriage Act (RFMA) passed the Senate,

“Love is love, and Americans should have the right to marry the person they love,” he said. “Today’s bipartisan vote brings the United States one step closer to protecting that right in law.”

“The Respect for Marriage Act will ensure that LGBTQI+ couples and interracial couples are respected and protected equally under federal law, and provide more certainty to these families since the Supreme Court’s decision in Dobbs.”

“I want to thank the Members of Congress whose leadership has sent a strong message that Republicans and Democrats can work together to secure the fundamental right of Americans to marry the person they love. I urge Congress to quickly send this bill to my desk where I will promptly sign it into law.”

I accidentally conducted a social media experiment on myself. I really like the results.