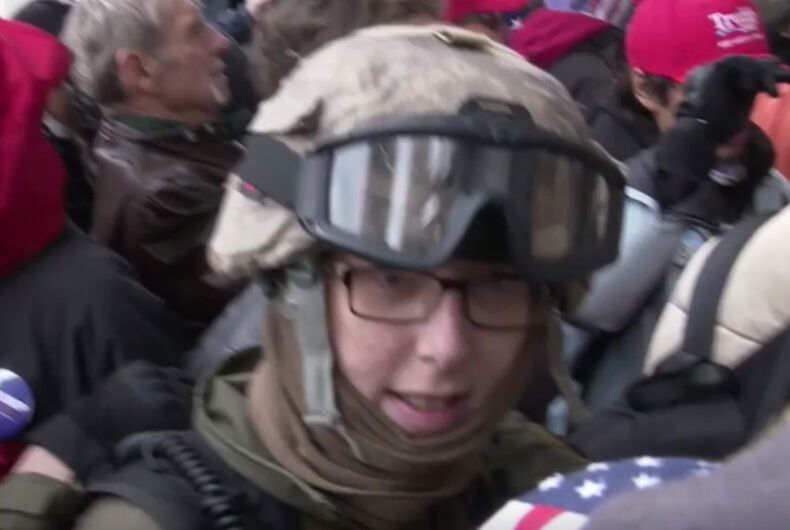 A transgender woman named Jessica Watkins testified in federal court that transphobic rejection and far-right conspiracy theories compelled her to join the Oath Keepers militia’s insurrection at the U.S. Capitol on January 6, 2021.

The service member reportedly told her, “I know who you are, fa***t,” Law & Crime reported.

She called Capitol Police officers “fa***ts” while storming the building. “I think it was lashing out at others the way I’ve been lashed out at,” she told the court.

Watkins found out about the Oath Keepers by watching far-right transphobic conspiracy theorist Alex Jones for four to five hours a day. She believed Jones’ claims and worried that the United Nations and Chinese communist government would infiltrate the Biden administration to help dominate U.S. citizens.

Jones, an anti-LGBTQ bigot, has claimed on his show Infowars that Democratic politician Hillary Clinton runs a child sex ring out of a gay-owned D.C.-area pizza restaurant (a conspiracy theory known as Pizzagate); that the transgender rights movement is a plot to allow people to have sex with their cars; and that the 2012 Sandy Hook Elementary School shooting was fake. His latter claim led to death threats against grieving parents who later successfully sued Jones for nearly $1.4 billion.

“I think I was gullible,” she testified, admitting that she no longer believes that the Biden administration will be infiltrated. But she admitted that she still has “questions” about the integrity of the 2020 presidential election.

Watkins also said that her militia was assigned to serve as bodyguards for Jones and former Trump security advisor Michael Flynn at the so-called Million MAGA March in D.C. in November 2020. There she met former Trump advisor Roger Stone, calling it “exciting” to meet “Trump’s inner circle.”

Watkins served in Afghanistan from 2001 to 2003 before transitioning and was forced out of the military “after her sexual orientation was discovered,” according to her lawyer. She owned a bar in Woodstock, Ohio before going to D.C. in January 2021.

Several days after the election, Watkins texted invitations to training for people she called “recruits,” saying, “I need you fighting fit by innaugeration [sic].”

In December, prosecutors believe that Rhodes told his followers there would be a “bloody, massively bloody revolution.” The group allegedly stocked up on thousands of dollars worth of weapons and gear.

Later that month, Watkins texted another member of the group: “We plan on going to DC on the 6th” and that she used a small group on the message app Signal to assign roles to the group on January 2.

On January 3, she allegedly told another member of the group that “weapons are ok now as well. Sorry for the confusion.” She also told that person to wear khaki or tan pants.

She and her group made their way to the Senate. Watkins allegedly told people in the crowd around her to “Push, push, push” and “Get in there, get in there” as the mob tried to get past a line of law enforcement officers.

Officers then used a chemical spray on the mob and they retreated. Watkins and her fellow Oath Keepers left the Capitol.

“Yeah. We stormed the Capitol today,” she allegedly wrote on Parler that day. Parler is a social media app for conservatives. “Teargassed, the whole 9. Pushed our way into the Rotunda. Made it into the Senate even. The news is lying (even Fox) about the Historical Events we created today.”

Several days later, Watkins messaged someone on Facebook: “We’ve been organizing a bugout plan if the usurper is installed… Something like 20+ Oathkeepers going to Kentucky mountains on hundreds of acres apparently.”

Prosecutors believe that she bought $17,500 of tactical gear and weapons in the days following the insurrection and met with other Oath Keepers to collect firearms. The FBI raided her home and found numerous weapons.

In a statement in December 2021, she accused the police of inciting the insurrection.

“My name is Jessica Watkins, and I am a January 6th defendant,” she wrote. “I have been incarcerated nearly a year for crimes I did not commit, so as to serve as a pawn for ‘The Party’ to exploit. And exploit they have.”

“Our charges are false, the truth manipulated, and we will one day be vindicated,” she wrote. She has since renounced the Oath Keepers.

Her lawyer argued that she should be let out of prison until her trial because she fears for her safety, because she was just “misguided” and not the extremist prosecutors say she is, and because “she believed that the president of the United States was calling upon her” that day.

She has since called her involvement in the attempted insurrection “very stupid.” A government attorney cross-examined her on Thursday morning.