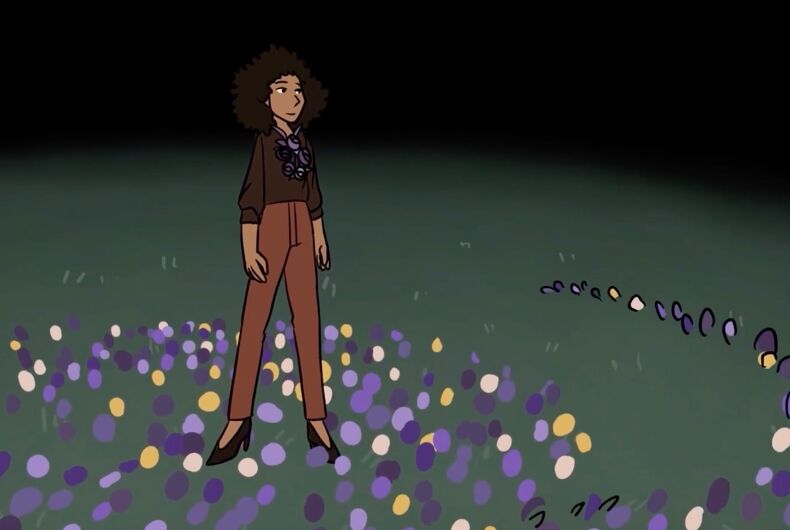 “As a trans femme person assigned male at birth (AMAB), I felt uncomfortable naming my experience with my womb. I could recount all the times I felt it throb and felt its thirst to hold something, but I struggled to articulate it.”

So begins an essay by trans author Féi Hernandez as part of a collection of trans writing focused on the intersection of trans rights and reproductive justice.

In addition to Hernandez’s powerful piece about yearning for motherhood, there is, among others, an essay by Alex Petkanas on the crucial need for trans-affirming, trauma-informed care; a conversation between two intersex artists about intersex bodily autonomy; and Translash’s Trans-Affirming Guide to Roe v. Wade, which provides abortion resources for trans and gender nonconforming people as well as information on how the decision to overturn Roe V. Wade affects the trans community.

The zine is part of TransLash’s commemoration of the Transgender Day of Remembrance.

In recognition of the day, the organization has also released a podcast episode hosted by TransLash founder Imara Jones that discusses why trans voices are crucial in the fight for reproductive justice.

The nonprofit also released an animated poetry short called Worthy, in which artist Averi Rose celebrates both her womanhood and her worthiness. The short was illustrated by Jay Katara.

“I used to run in circles around my identity,” Rose opens in the video. “The noise of social conditioning was deafening and I felt defeated. What purpose would I have if I was no good to myself?”

She continues, “Acceptance starts from within, and courage is like a muscle.”

“Womanhood is precious. It is not limited to one experience or idea. Womankind is ever-evolving. Revolutionary, creating space for women like me. Trans women, Black trans women, are worthy of all the goodness this world has to offer.”

The Transgender Day of Remembrance is a day to honor the lives of transgender and nonbinary individuals who have been lost to anti-trans violence. It was started in 1999 by trans advocate Gwendolyn Ann Smith to honor Rita Hester, a Black trans woman who was murdered in November 1998.

The day often involves community vigils and events around the country, providing space to mourn and raising public awareness of the epidemic of anti-trans violence in the United States.

According to the Human Rights Campaign, at least 32 trans and gender nonconforming people have been killed by violent means so far this year. 2021 was a record year for fatal anti-trans violence, with 50 fatalities recorded.

5 gay authors whose stories show us how to age gracefully