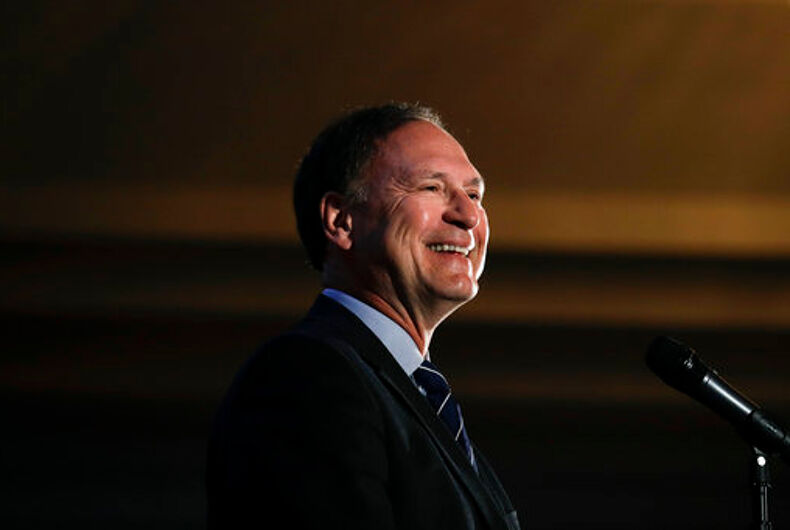 FILE- In this Feb. 11, 2017, file photo, Supreme Court Justice Samuel Alito smiles as he delivers a keynote speech at the Claremont Institute's annual dinner in Newport Beach, Calif. Alito said Wednesday, March 15, during a speech sponsored by a Catholic organization in New Jersey that the U.S. is entering a period when its commitment to religious liberty is being tested. Photo: (AP Photo/Jae C. Hong, File)

As if the Supreme Court didn’t have enough credibility issues, The New York Times is reporting that Justice Samuel Alito told a conservative couple with whom he was friends about a major Supreme Court decision in advance. The allegation comes from the former head of the same organization that claimed it used to pray with justices in their chambers.

The case involved Hobby Lobby, the craft store chain, which objected to providing contraceptive coverage under Obamacare on the grounds the company had religious objections. In a major victory for the right, the Court ruled 5-4 in Hobby Lobby’s favor. The decision also had significant ramifications for LGBTQ rights, because it helped establish religious liberty as a major legal principle that anti-LGBTQ activists are using to erode progress.

Leaking the decision in advance of its announcement is a dire breach of court etiquette, but this is the second case to come to light this year. The biggest bombshell came last May when an advance copy of the Dobbs decision overturning Roe v. Wade was leaked to Politico. That decision was authored by Alito.

According to the Times, Rev. Rob Schenck, the founder of Faith and Action, specifically targeted the Supreme Court to influence its decisions by recruiting wealthy conservative donors to rub elbows with justices at supposedly apolitical events. Among them were Donald and Gayle Wright, an Ohio couple, who told a Faith and Action newsletter that they become involved in order “to have a major impact on the attitudes and actions of those in a position to shape and interpret our laws.”

Indeed, the Wrights became chummy with Alito and his wife, Martha-Ann. So it was not entirely a surprise with Gayle Wright reached out to Schenck the day after the Wrights dined with the Alitos with an email message: “Rob, if you want some interesting news please call. No emails.”

According to Schenck, who left Faith and Action in 2018, the news was that the Court had decided to rule 5-4 in favor of Hobby Lobby. The Times said that contemporaneous emails and interviews that the paper obtained apparently confirm Schenck’s allegation. Alito and Gayle Wright both deny the claim.

Whether Alito is the source of either leak is anyone’s guess. Schenck, who has since softened his hard-right views, says that when the first leak appeared, he sent Chief Justice John Roberts a letter detailing the information about the 2014 leak as having a bearing on the incident. Schenck got no response.

What is clear is that Alito has increasingly shown disdain for the kind of decorum that earned the Supreme Court legitimacy in the eyes of the public. He openly mocked foreign leaders for their response to the Dobbs ruling.

Schenck had previously confirmed that his group, which was pretty openly engaging in advocacy, used to pray with justices in their chambers. Considering the conflict of interest that this represented in cases coming before the court, the allegation would have been shocking if it wasn’t so much in character with the conservative justices’ willingness to flout norms.

Then again, Alito has never gone to great pains to hide his political interests, even in the confines of the Court chambers. Brian Brown, the founder of the National Organization for Marriage, which has battled marriage equality for years, got to boast about his time with Alito in a tweet.

As a reminder, Alito has said that he thinks the marriage equality decision Obergefell v. Hodges was wrongly decided, so Brown may have reason to be filing an amicus brief with the Court at some future date if marriage equality is challenged.

With a conservative majority firmly behind him and Roberts unable or unwilling to question Alito’s behavior, Alito is really the de facto Chief Justice of the Supreme Court now. He can do as he pleases.

Apparently, what pleases him is to let everyone know that he’s calling the shots and they can’t do anything about it.