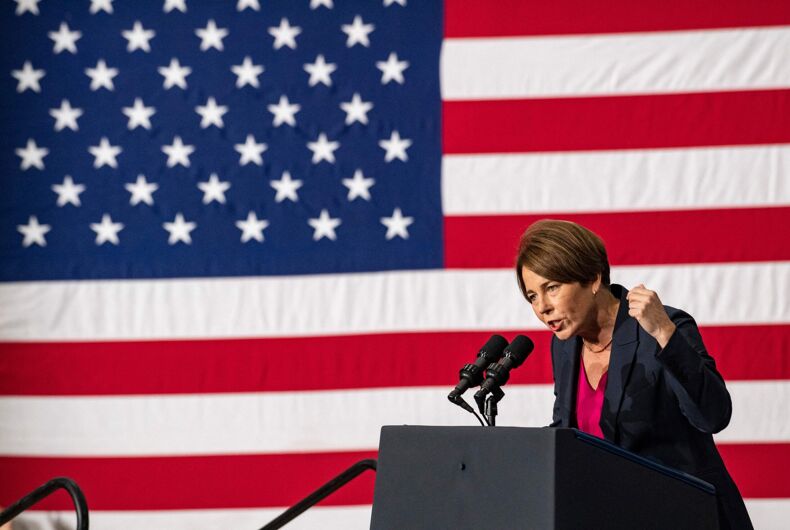 Maura Healey speaks to supporters during a "Get Out the Vote rally" at the Reggie Lewis Track and Athletic Center at Roxbury Community College in Boston, Massachusetts, on November 2, 2022. - US Vice President Kamala Harris attended the rally in support of Massachusetts Democratic candidate Maura Healey, who has been elected the first lesbian governor in the nation and first woman elected governor in Massachusetts. (Photo by Joseph Prezioso / AFP) (Photo by JOSEPH PREZIOSO/AFP via Getty Images)Photo: AFP via Getty Images

Democrat Maura Healey of Massachusetts has become the first out lesbian Governor in the country, as well as the first elected woman governor of her state.

“It is an uphill battle for LGBTQ candidates and women candidates to win high-level elected office, but Massachusetts voters know Maura is a fighter and today helped her make U.S. political history,” said Mayor Annise Parker, President & CEO of the LGBTQ Victory Fund. “Maura is one of the most compassionate and courageous public servants in America, never backing down from a tough fight on behalf of the underdog. In the face of so much hate and intolerance sweeping our nation, her win is a sign – especially to LGBTQ kids in desperate need of hope – that LGBTQ people have a place in American society and can become respected public leaders. We are confident that under Maura’s leadership, Massachusetts will reach new heights as one of the most inclusive states in the country.”

Healey, 51, was elected Attorney General in 2014. While in office, she took on Purdue Pharma over the opioid crisis and exposed Exxon’s climate crisis denial. As Civil Rights Chief in the AG’s office, Healey brought the first successful challenge to the Defense of Marriage Act, helping to lay the groundwork for marriage equality nationwide.

As AG, she championed non-discrimination protections for trans people in Massachusetts and pushed for gender-neutral markers both federally and for the state.

She also sued the Trump administration repeatedly – nearly 100 times over her tenure, starting with a multi-state lawsuit aimed at overturning the Muslim travel ban enacted just days into Trump’s term. According to the Boston Globe, she was successful in over three-quarters of the cases.

“I have a message for President Trump,” Healey said at the Boston Women’s March in 2017, soon after his inauguration, “We’ll see you in court.”

After she won the Democratic primary, she stood before a raucous crowd of supporters and told them, “I am so proud to be able to stand before you tonight as your Democratic nominee for governor of Massachusetts.” She nodded to the sound of her latest title and added, “That sounds good.”

The former professional basketball player and captain of her team at Harvard describes herself as a “baller” and was clear-eyed about the work ahead in her remarks that night: “I ask you, as a former point guard, to leave it all with me on the court.”

“Tonight, Maura Healey made history, becoming the first out lesbian governor this nation has ever elected. Massachusetts embraced a platform of equality and inclusion by electing a pro-equality champion. With her in the statehouse, LGBTQ+ youth across Massachusetts and the United States will get to see that they are represented at the highest levels of government, and that they can achieve anything they set their minds on. We celebrate Maura Healey’s historic win and look forward to working with her to continue to fight for a Massachusetts that is inclusive and welcoming to all.”