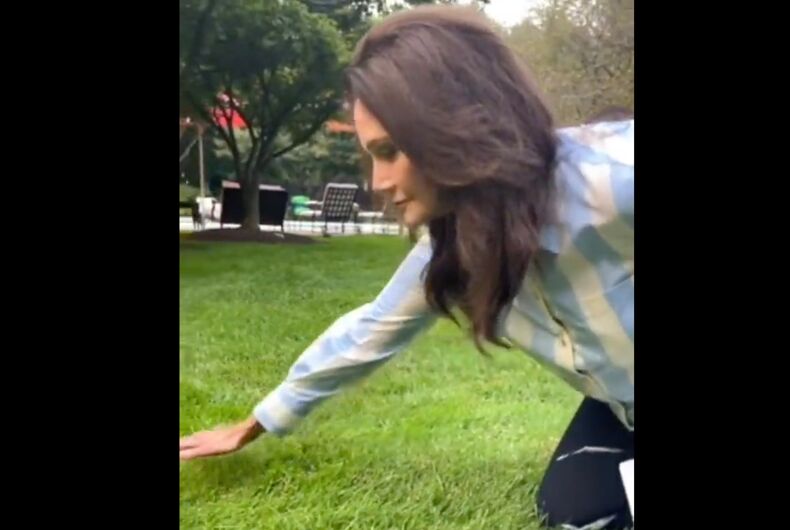 Legendary singer and reigning queen of Twitter Dionne Warwick has teamed up with Wonder Woman star Lynda Carter for a tongue-in-cheek PSA mocking Twitter users for forgetting what it’s like to go outside.

“It’s the series finale of Twitter,” the joint post reads, referring to the troubles the platform is facing under the direction of CEO and owner Elon Musk. “Do you remember how to touch grass? We hope so.”

“Touch grass” is an online insult telling someone to get off the internet and go outside. It’s similar to “get lost.”

The video opens with Warwick saying she has “been seeing and hearing some really ugly stuff going on from you guys.”

“Ugly words, even getting down to the bullying which I, you know do not like at all. You know I love you too much to admonish you, but-”

At that, the screen goes black and reads, “We interrupt this auntie lecture for an emergency demonstration on how to log off and touch some grass with Lynda Carter.”

Carter then appears on the screen to provide three easy steps for touching grass.

“I’m here to teach you how to log off and touch grass. Not smoke it, just touch it.”

The video then cuts to Carter sitting on her knees in the grass and explaining to first “get within arm’s reach of the grass.” She then slowly brushes her fings over the grass, as depicted by the video’s “Slo mo cam.”

“Put your hand out, don’t be scared you can do it,” Carter said. And finally, “Gently touch the grass.”

The video then cuts back to Warwick. “Get a little fresh air,” she said. “I want you to know there’s no need for this backsliding stuff.”

The video then interrupts Warwick to say that Carter has more ways to show users how to touch grass. Carter is then shown laying across the grass, rubbing a small green square.

“We can do a lot better,” Warwick concluded, “and we’re not gonna let ugliness take over again, right? Inhale, and then exhale. Take care! God bless all of you.”

It’s the series finale of Twitter. Do you remember how to touch grass? We hope so. pic.twitter.com/jxpcMdpwN2

In 2020, then 80-year-old Warwick became known as “Twitter’s Auntie” after learning how to use the platform and keeping the Internet laughing for weeks.

Warwick has repeatedly expressed her support for LGBTQ people in her tweets and once time announced that she was learning more about pride flags so she could be “as inclusive and respectful as possible.”

Carter is also a longtime LGBTQ ally. This past June, at the start of Pride Month, she posted a firm message to anyone who doubts whether her most famous character is a queer icon.

“I didn’t write Wonder Woman, but if you want to argue that she is somehow not a queer or trans icon, then you’re not paying attention,” she tweeted. “Every time someone comes up to me and says that WW helped them while they were closeted, it reminds me how special the role is.”

The following week, she mocked anti-LGBTQ Rep. Lauren Boebert (R-CO) for suggesting that parents take their kids to church instead of drag shows.

“Have you ever been to drag brunch? They have bread and wine, loving community, and men in fabulous dresses. Sounds a little like church to me!”